Cet article fait partie de notre dossier sur le sujet. Voir toute la couverture ...
MAE LA, Thailand
The aroma of roasting coffee beans filters through Jladdy’s hut, nestled into a jungle-covered hill in the Mae La refugee camp in northern Thailand. Crouched over the roasting tin, he laughs when he recalls his arrival more than 20 years ago.
“I thought we would stay here for a week, not years,” says Jladdy, who fled across the border in 1994 when government soldiers arrived in his ethnic Karen village in Myanmar.
He is one of 105,261 refugees from Myanmar that the UN refugee agency, UNHCR, says remain in nine camps in Thailand after escaping the ethnic wars that have bedevilled their home country for six decades. Their long stay in Thailand may now be coming to an end.
Myanmar’s new government has told IRIN it will soon announce a plan to repatriate the refugees in Thailand. This plan is timely as international donations and resettlement spots in other countries are drying up due to other refugee crises around the world.
SEE: Is resettlement for 10 percent of refugees a pipe dream?
Zaw Htay, a spokesman for the office of President Htin Kyaw, said the plan will be made public after Foreign Minister and Nobel Peace Prize laureate Aung San Suu Kyi visits the refugee camps later this week “to find out more about their issues, difficulties, and concerns”.
“Wait for Daw Aung San Suu Kyi to visit, and we will announce more after that,” he told IRIN.

Aung San Suu Kyi is likely to discover that the refugees do not want to go home – at least not yet.
The past few years have seen historic changes in Myanmar. After almost half a century of unbroken military rule, the generals running the country initiated sweeping political and economic reforms in 2011. Once persecuted and imprisoned for their struggle against the military, Aung San Suu Kyi and her National League for Democracy party swept elections last November and now run the government.
The reforms have their limits, however. The constitution drafted by the military in 2008 grants a quarter of parliamentary seats to serving officers, as well as control over key ministries.
The military also retains leadership over the peace process, which is meant to resolve conflicts with about two dozen ethnic armies. Only eight of the 15 groups invited to sign a “nationwide ceasefire agreement” last October did so, while scores were excluded. Fighting still rages in many ethnic areas where government troops are accused of committing abuses against civilians.
SEE: Forgotten Conflicts – Myanmar
“I cannot trust what Aung San Suu Kyi says, as the military also has power,” said Jladdy.
The Karen National Union, which fought the ethnic Bama-dominated military, did sign the ceasefire agreement, and fighting has stopped in Jladdy’s homeland of Karen State. But that provides little reassurance in the long term.
“In my opinion, in the future there will be more war,” he said. “It won’t be better.” 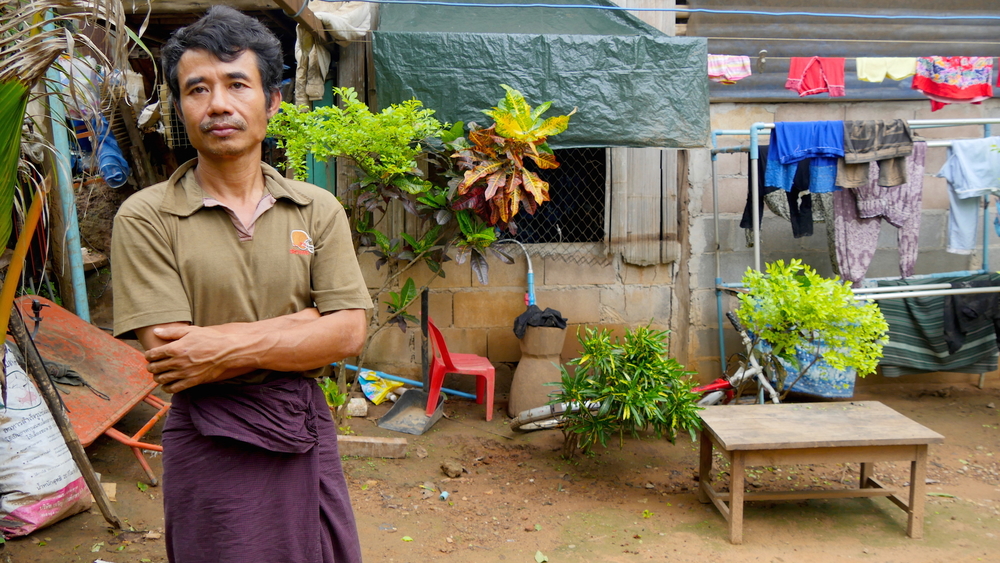 Jladdy outside his home in Mae La camp for Myanmar refugees in Thailand
Many refugees share that scepticism, according to a survey carried out by UNHCR in 2014. Most respondents said they did not want to return to Myanmar, instead preferring to stay in Thailand or be resettled to a different country.
“Words alone won’t encourage people,” said Sally Thompson, executive director of The Border Consortium, one of the largest NGOs working across the nine camps.
“They need to see real change on the ground. They fled from the military and suspicions still run deep.”

But the refugees are running out of options.
The Border Consortium has seen international donations fall from 820 million Thai baht (about $23 million) over 2015 to an estimated 605 million Thai baht for 2016 – a fall of 26 percent. One consequence of reduced support is that the refugees now receive less food: rice rations have declined from 16 kilograms per person each month to nine kilograms.
“If we reduced it any further then we would have nutritional concerns, health concerns,” said Thompson.
Faced with an unprecedented global refugee crisis, donors are directing funding to other areas and resettlement spaces are running out for Myanmar refugees, especially in light of the recent reforms.
With ongoing conflicts in countries including Syria, Yemen, and Afghanistan, global displacement has hit a record high, UNHCR said in an annual report today. There are 65.3 million people displaced worldwide, of whom 21.3 million are refugees. The rest are displaced within the borders of their home countries. There were also more new asylum claims in 2015 than in any previous year.
“In a situation where there are only a certain number of resettlement places available, countries have to examine factors such as humanitarian need, and then they have to prioritise,” explained David John, a senior regional programme coordinator with the International Organization for Migration in Thailand.
After Afghanistan, Myanmar is the second-largest source of refugees and internally displaced people in Asia, with almost one million in total, according to the UNHCR report. And yet, due to the political progress in their home country, Myanmar refugees are now less likely than ever to have their asylum claims accepted.
The United States, which refers to Myanmar by its former name, Burma, has taken in 85,000 refugees over the years. But a State Department spokesperson told IRIN that it is winding down its resettlement programme.
“We have reached the natural conclusion of the programme that has specific eligibility criteria for Burmese refugees,” said the spokesperson.

At IOM’s resettlement processing centre, south of Mae La, refugees boarded a double-decker bus, the first leg of their journey to a new life in the US.
“Burma does not feel like home; the camp does not feel like home,” said Doh Htoo. “We will go to America and try to make this our home.”
He and his family were lucky enough to have been registered as refugees in 2005 and processed for resettlement. But they are among the very last who will have that opportunity.
Instead, refugees who remain in Thailand have two options: stay in the camps as funding and services dry up, or return to Myanmar and face an uncertain future.
db/jf/ag
(LEAD PHOTO: Mae La refugee camp in Thailand. David Doyle/IRIN)
Partager cet article
Participez à la discussion