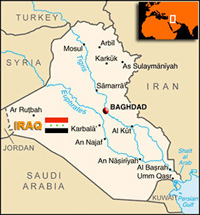 Dozens of civilians including women and children were reportedly killed in US air strikes on Monday near the western Iraqi town of al-Qaim, some 12 km from the Syrian border, local doctors said.

US military authorities in Iraq confirmed the strikes, noting in a statement that: “Coalition air forces, acting on multiple intelligence sources and tips from local citizens, conducted an air strike against two al-Qaida terrorist safe houses near Ubaydi, Iraq.”

The statement added that Coalition forces had targeted a “senior al-Qaeda terrorist leader,” who “was linked to other senior al-Qaida terrorists and foreign fighters in the Ubaydi, Husaybah, al-Qaim, and Karabilah regions.”

The army statement went on to note that air strikes had destroyed a second safe house, “reported to be an operational base that terrorists were operating out of to conduct terrorist attacks against Iraqi Security and Coalition forces.”

Local witnesses, however, say the dead and injured were mainly civilians.

According to al-Rabia’a, several women and children were among the 43 dead and 25 injured who reached his hospital.

He noted that two children killed in the strike were brothers, whose mother remains in critical condition after suffering serious injuries. “It’s disgusting that they attacked innocent people and then just say that ‘insurgents’ were targeted,” al-Rabia’a said.

The father of the two slain boys told IRIN that he had been visiting friends nearby when US planes opened fire on his house, in which his sons were sleeping. “When I heard the explosion, I ran home and tried to take what was left of my two innocent boys,” 41-year-old Omar Kudaissy said.

According to local police officer Hamed Youssef, there was considerable difficulty transporting all the injured to the hospital. “The roads are closed and we have very few boats,” he complained. “And there are still a number of bodies still in need of burial.”

Youssef added that, aside from the air strikes, four houses in the area had been raided by US military forces.

Sheikh Bakar Sultan, a local tribal leader, confirmed that four houses had been raided. He added, however, that none of their residents had any associations with insurgents or terrorists.

“They were just families sleeping, and waiting for the call to prayer,” said Sultan. “But for many of them, it wasn’t the time for prayer – only for blood and suffering.”

Despite firsthand accounts of civilian deaths, however, US military officialdom insists that only terrorists and foreign fighters had been targeted.

“We are not aware of any civilians being killed in this strike against the terrorist safe houses,” US Army Lt Colonel Steven Boylan, director of the US Army’s Combined Press Information Centre, told IRIN.

The army statement noted, “The use of precision guided munitions to destroy the two terrorist safe houses and the timing of the strike mitigated the risk to civilians in the local area.”

In the meantime, many families have reportedly begun fleeing the city in fear of more air strikes, although their numbers are currently unknown.