In the current international climate, refugees can use all the supporters they can get. But last week, refugees around the world lost an irreplaceable champion with the passing of Dr. Barbara Harrell-Bond.

Barbara worked tirelessly for more than 35 years to improve protections for refugees, to ensure that their voices were heard not only in academic research but in real-world policy debates.

Barbara was never short of outrage at how badly refugees were being treated throughout the world. To her, fighting that injustice was the most important thing – it was all-consuming. Her research and teaching were inspirational to generations of scholars and practitioners of refugee and forced migration studies. Most memorably, she never shied away from speaking truth to power, taking on donor governments, UN bodies, large non-governmental organisations, and host governments alike. Indeed, her bold criticisms, backed by robust evidence, have inspired generations of scholars to follow her example and hold to account officials charged with assisting refugees. 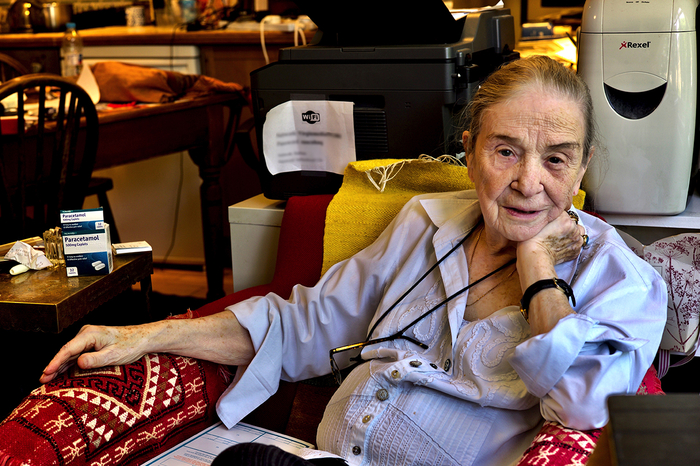 Unni Karunakara
Barbara Harrell-Bond in 2017. Her research and teaching were inspirational to generations of refugee studies scholars and practitioners.

I first met Barbara in 1988 while studying anthropology at the University of Oxford. I had spent the whole year studying subjects like witchcraft and totemism – things that can make people seem more exotic than understood – and I wanted to use my training in a more useful way. My tutor sent me along to meet Barbara. I stepped into her office and found a wonderful, diverse world of people who were doing exactly what I wanted to be doing – using academic research to try to make a positive difference in the world.

Trained as a legal anthropologist, she studied at Oxford under the supervision of eminent anthropologist Edward Evan Evans-Pritchard.

Her engagement with refugees and African studies came later, but her commitment to social justice was clear even from her 1967 dissertation, an ethnography of a deprived housing estate in the Oxford suburbs, Blackbird Leys. She went on to research law and dispute resolution in traditional courts in Sierra Leone.

Barbara’s work on refugees began in the early 1980s. She established the Refugee Studies Programme at Oxford (now known as the Refugee Studies Centre). Run by a tiny but dedicated team, this institution quickly became a crucial resource and meeting point for academics, practitioners, and refugees themselves. Barbara led the way in establishing refugee studies as an interdisciplinary academic field. At its centre: an agenda for influencing policy and bringing a refugee-centred focus to debates about asylum policy, social integration, and refugee assistance.

Barbara’s seminal 1986 book Imposing Aid: Emergency Assistance to Refugees was based on research she and a band of Oxford students and local researchers conducted in what is now South Sudan. In it, she makes the very simple argument – she was the first to agree it should not have to be made – that refugees are not helpless victims, but always and everywhere have agency, resilience, and dignity, and that this must be the starting point for any assistance. Showing how badly wrong things can go when they fail to keep this basic truth in mind, this book – as well as Rights in Exile: Janus-Faced Humanitarianism (which she co-authored) – called to account those acting to aid and protect refugees. Her criticisms were always sharp, direct, and – most embarrassingly for their targets – meticulously substantiated with evidence. She did not suffer fools or egos gladly.

I worked for Barbara in 1989-1990, helping to put together material for training courses for people working with refugees. She had me working late into the night and on weekends. I remember working on New Year's Day, stepping outside the office only to buy bread, salami, and Barbara's cigarettes. When my work permit expired after a year, she somehow managed to get it extended through a connection in the British government’s Home Office – much to my surprise, as that was a regular target (along with the UN’s refugee agency, UNHCR) of her strident criticism.

These days I am less surprised; these organisations are sprinkled with people who were influenced by her, who carry with them a streak of critical boldness even as they work inside the belly of the beast.

Many years later, when we started a master's degree in ‘Migration, Mobility and Development’ at SOAS, she told me that she was sorry we had focused on migrants of all kinds rather than focus exclusively on refugees, as she thought that the latter needed greater protection. She picked fights over this issue with many people, and she was not easy to get along with. At the same time, she was fiercely loyal to her friends, and we remained in regular contact over three decades, up to just a few weeks ago.

Barbara’s research and teaching were inspirational to generations of scholars and practitioners of refugee and forced migration studies. She was crucial in the founding of the Journal of Refugee Studies and the Forced Migration Review – respectively the world’s leading academic and practitioner publications on refugees and displacement. She also set up the Rights in Exile web portal that provides essential information and a network of experts who provide pro bono legal assistance to asylum seekers.

Barbara was also a founder of the International Association for the Study of Forced Migration, the leading professional association for scholarship on forced migration. The association will meet next week in Thessaloniki, Greece, where she was to have received yet another lifetime achievement award, and seen the launch of a new film about her life, Barbara Harrell-Bond: A Life Not Ordinary.

Her home in north Oxford was a hive of activity – every guest was pressed into voluntary service to contribute to scholarship or advocacy on refugee issues. Refugees found safe haven there. Stray academics found purpose in her fierce commitment to social justice.

When I now think about Barbara's legacy, I realise that almost everyone I have collaborated with or respected in the field of refugee studies has a Barbara connection. In some cases she introduced us to each other. In other cases I feel a connection to someone and only find out much later that Barbara touched their lives in some way, in some part of the world – Uganda, South Africa, Kenya, Egypt, India… Whether she introduced us to each other or not, having been in her orbit changed all of us and made us into a strong, subversive, passionate clan.

A few years ago I went to visit her again. She sat in her living room, which continued to be a cottage industry for refugee protection. Three student interns sat at computers. A fourth was cheerfully preparing lunch for everyone. They had all, like me all those years before, been seduced by Barbara's passion.