It’s barely dawn and the streets of Caracas are largely empty, except for heavy-eyed commuters heading to work and hungry Venezuelans scavenging through the rubbish for breakfast.

The men and women meticulously pick their way through foul-smelling black plastic bags in the hope of finding some edible scraps. Passers-by don’t give them a second glance. This is an increasingly common sight in Venezuela’s capital.

Despite having one of the world’s largest oil reserves, years of government mismanagement along with a tumble in oil prices have led to the catastrophic collapse of Venezuela’s economy, food supply, health system, and basic services, leaving a population desperate for help – more than eight in 10 Venezuelans now live below the poverty line.

Food shortages have forced Venezuelans to drastically cut their daily food consumption, with more than 41 percent of the population now eating just two meals a day, according to findings by local research firm, More Consulting.

Meanwhile, doctors are struggling to treat even simple infections and chronic illnesses due to a severe shortage of medicines and medical supplies. Even water is in short supply following several years of drought.

According to a Datanalisis poll, Venezuela is experiencing shortages of 80 percent of foods and medicines. A spiralling inflation rate means that even those goods that are available are mostly unaffordable to all but the wealthiest.

And yet, the government has continued to deny the existence of what is by now a well-documented humanitarian crisis, blaming it instead on a “financial war” waged by enemies of the state.

“It’s been a while now since we began seeing an increase in threats, harassment and even physical attacks on activists and NGOs,” said Inti Rodriguez of local NGO, PROVEA.

PROVEA tackles the complex issue of human rights in Venezuela, including citizen’s rights to medicine and food. Like other non-profits, the government has accused PROVEA of receiving financial backing from foreign organisations, including the CIA, and of being agents in an international conspiracy to oust President Nicolas Maduro.

“This was a constant [problem] during [the administration of former President] Chavez, but it has increased with Maduro,” said Rodriguez, who was abducted in February 2014, allegedly by a coalition of government-affiliated guerrillas and the Venezuelan intelligence services, SEBIN, who beat him and questioned him about his humanitarian work.

NGOs in Venezuela have felt particularly vulnerable since 2010 when the Supreme Court ruled that individuals or organisations receiving foreign funding “with the purpose of being used against the Republic” could be prosecuted for treason and sentenced to up to 15 years in prison.

The threat of imprisonment has modified how NGOs communicate both with the public and with each other. Staff often encrypt sensitive information before sharing it with others and rely on networks to keep each other informed if colleagues run into trouble with the authorities.

“I think they’re very brave and they keep doing their jobs, but it’s a very hostile environment for local organisations to operate in,” said José Miguel Vivanco, Americas director at Human Rights Watch, which released a report last month about Venezuela’s humanitarian crisis.

The cost of denial

Rodriguez noted that those most affected by the government’s restrictions on NGOs are the very people they seek to help. “[They] feel intimidated when they go to an organisation that has been pinpointed as an enemy [of the government]. Authorities try to intimidate the victims so they won’t come to us.”

In February, Maduro turned down the opposition’s request to enroll the country in a World Health Organization programme to receive subsidised medical supplies. And in May, his administration blocked an effort by the opposition-led National Assembly to pass a law that would have facilitated international aid and authorised the shipment of medicines from abroad.

“We’ve tried to request permission to allow help into the country, but there are specific criteria [in place] to allow the entry of medicine and food products,” said Janeth Marquez, national director for Catholic charity, Caritas.

In August, three tonnes of medications that Caritas had secured from Chilean donors were blocked from entering the country and held in the port town of La Guaira. The organisation has been waiting ever since for the Ministry of Health to issue an elusive document that would allow the aid in. By next month, some of the medicines will expire, rendering them useless.

“Medicine can only come in via the state, and only during emergencies will they allow them [to come in] through other means,” said Marquez. “We are worried because there are people whose lives are at risk.” 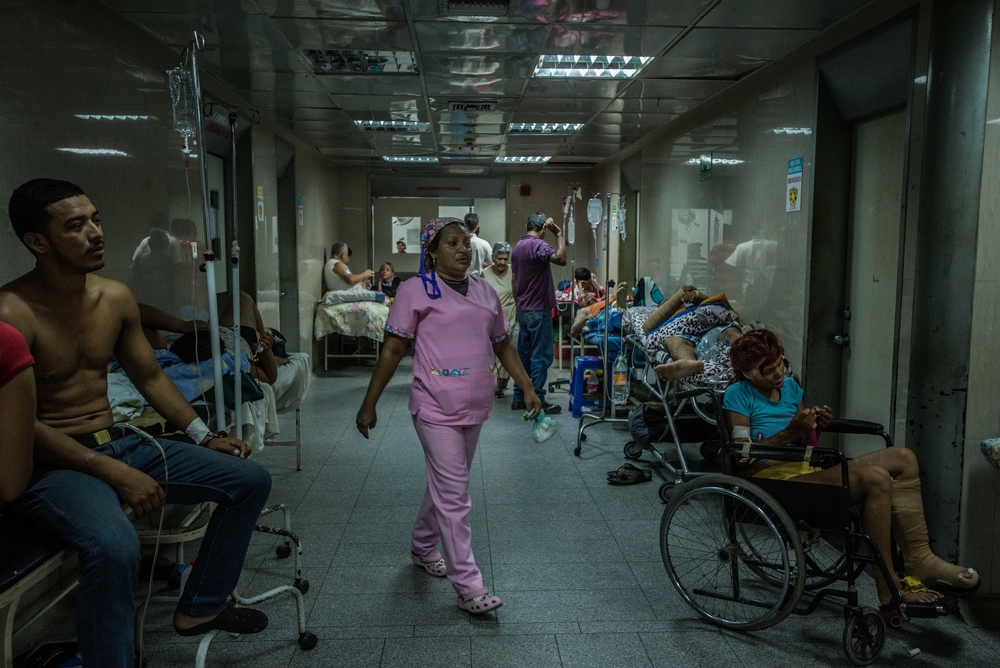 Some local NGOs have managed to get around restrictive border controls by shipping small amounts of aid in private packages.

“It’s the only way,” said Ana Isabel Otero, founder of Comparte Por Una Vida, a seven-month-old non-profit that receives donations of baby formula and nutritional supplements from around the world and distributes them to children in hospitals and orphanages.

Such interventions are urgently needed in a country where rates of infant mortality have nearly doubled in recent years, according to internal Ministry of Health reports obtained by Human Rights Watch. Doctors also report that they are seeing increasing numbers of malnourished babies.

And yet, Otero struggled even to register her organisation as an NGO. “The places where you go and register are complicated; there are mafias [operating them],” she said. “I had to register in three different town halls. It took me five months before I was registered.”

Caritas, along with other NGOs and activists, has been calling on the government to open a humanitarian corridor that would allow urgently needed aid into the country.

“This [corridor] needs to be approved… it goes beyond politics and political interests,” said Marquez. “If we can’t do this, if we can’t even agree on the lives of our own people, we’re in big trouble in Venezuela,” she added.

An agreement to allow international aid into the country is one of the numerous issues the opposition is pushing for during Vatican-mediated talks with the government that started in October.

Few international NGOs have been given permission to operate in the country. Those that are present are required to inform the government of their every move, and none have been authorised to run large-scale medical assistance programmes to address the crisis in the healthcare system.

Médecins Sans Frontières, which partners with local organisations to provide mental healthcare to victims of urban violence in Caracas, responded to questions from IRIN that it has “a low coms approach” in Venezuela. Other international NGOs that IRIN contacted for this article also declined to comment.

“Their biggest concern is that they fear losing the limited authorisation they have to operate,” said Vivanco of Human Rights Watch, which also struggled to get international NGOs to go on the record for its recent report.

UN agencies operating in the country, including the WHO, the Pan American Health Organisation (PAHO) and UNICEF, have also kept a low profile and did not respond to IRIN’s requests for comment. “They can’t do much without government authorisation. They say their hands are tied because of that,” said Vivanco.

“A big problem is that they haven’t done a public independent assessment of the crisis,” he added. “You have [UN Secretary General] Ban Ki-moon saying there’s a humanitarian crisis, and still, the humanitarian agencies that have the capacity of doing an assessment and engaging with the government to palliate the effects of the crisis in the short term do not appear to have done it.”

In July, 50 Venezuelan NGOs penned an open letter to Ban accusing UN agencies of remaining silent about Venezuela’s crisis and “failing to fulfil its responsibilities”.

Four months on, the need for the Vatican-backed talks to yield a breakthrough grows by the day.