For years, Central Americans – mainly working-age men – have passed through Tapachula, near Mexico’s southern border with Guatemala, en route to the US in search of a better life. But nowadays, the city’s migrant shelters are overflowing with families seeking refuge. Only a tiny minority will find it in Mexico, where a lack of awareness about refugee rights, combined with pressure from Washington to detain and deport Central Americans, means only a fraction of those eligible for international protection are getting it.

Rather than try to reach the US border using increasingly dangerous routes to avoid detection, more and more migrants, like Vanessa Portillo and her boyfriend Carlos, both 18, are seeking to stay in Mexico.

Two failed bids to traverse the country ended in deportation back to El Salvador. On this, their third attempt, they’ve applied for asylum.

Portillo is nursing her newborn on the bottom bunk of a dormitory bed, surrounded by sympathetic strangers offering her advice on motherhood.

Portillo gave birth to her son in Tapachula. They had hoped to make it to Tijuana in northern Mexico where her mother lives but were twice intercepted by Mexican immigration authorities. This time, as Portillo was just days away from giving birth, they stopped in Tapachula and found refuge in one of the city’s over-full migrant shelters.

Here, Portillo is learning to care for her son with help from older mothers from Guatemala, Honduras, and El Salvador – the three countries that make up Central America’s Northern Triangle. An epidemic of violence between gangs, organised crime groups and security forces has made the region one of the most dangerous in the world outside of a war zone.

In 2015, around 400,000 undocumented migrants entered Mexico through its porous southern border with Guatemala, and this year 450,000 are expected.

While most still try to reach the United States, an increasing number of families are seeking refuge closer to home in Costa Rica, Belize, and Mexico.  This is largely down to an immigration crackdown launched in July 2014 under pressure from the US, after a record number of unaccompanied Central American children reached the Mexico-US border.

Since then, US aid has helped fund the deployment of thousands of Mexican troops who work alongside immigration agents, detaining and deporting potential refugees before they reach the US border.

Almost 200,000 migrants were detained by Mexican immigration agents last year, a rise of 130 percent from 2013. Nine out of 10 of those detained were from the Northern Triangle.

“Mexico’s immigration ‘policy’ is to stop people from reaching the north; that’s it, there’s no other strategy or plan,” Fermina Rodriguez, from the Fray Mattias Human Rights Centre in Tapachula, told IRIN. “No thought was given to what desperate people would do if they couldn’t reach the US. Of course they would look for alternatives.”

Portillo grew up in a semi-rural area north of El Salvador’s capital, San Salvador, where one of the country’s most powerful gangs, the Mara Salvatrucha (MS13), operates. She was still at school when she met Carlos, who lives in a nearby neighbourhood controlled by a rival gang.

In April, when Portillo was six months pregnant, gang members started harassing Carlos, who worked in a tortillería or tortilla shop, trying to force him to help them hide and deliver illicit goods. He refused. Over the next few weeks, the harassment turned into threats to kill him and Portillo.

Terrified, the couple fled one night and headed north to Mexico, hopping on and off buses, trying to avoid immigration officers. “Some drivers would drop us off before the checkpoints and promise to wait on the other side, but when we arrived they’d be gone. We walked many hours through the jungle. We were always scared of being caught,” Portillo told IRIN.

They made it only as far as Acapulco, in southern Guerrero State, before federal police officers boarded their bus and detained them. The couple were held separately for a week in an ill-equipped detention centre, without any access to medical care. Portillo was seven months pregnant. No one told them about their right to apply for asylum.

They were transferred to Siglo 21 in Tapachula, the country’s biggest detention centre, where busloads of Central American migrants apprehended at different points along the route are transferred every day. The vast majority are deported to their countries of origin within 24 hours.

Here, the couple were told about their right to seek asylum, but by this point they were exhausted and traumatised.

“I was locked in a cell with many women; some kept asking me for money. I was scared and just wanted to go home,” said Portillo.

The bus journey back to San Salvador took nine hours. The couple rested for two days and then set off again, but were caught and deported a second time. Demoralised and drained, they decided to stay in El Salvador and moved into Portillo’s father’s house.

But gangs operate in connected clicas, or neighbourhood cells, and within a few weeks the same gang members had found them and started threatening them again.

“I was more than eight months pregnant. I didn’t want to leave home, but we had no choice. We were scared. We can never go back,” said Portillo.

The young mum is adapting to her precarious situation but desperate to see her own mother. Carlos, who seems young for his 18 years, is terrified. “I need to get a job to look after them, but I don’t know what I can do. I miss my mum, I miss home.”

It will be at least three months before the couple know the outcome of their asylum application. If successful, they hope to become naturalised Mexican citizens, as their baby was born here. 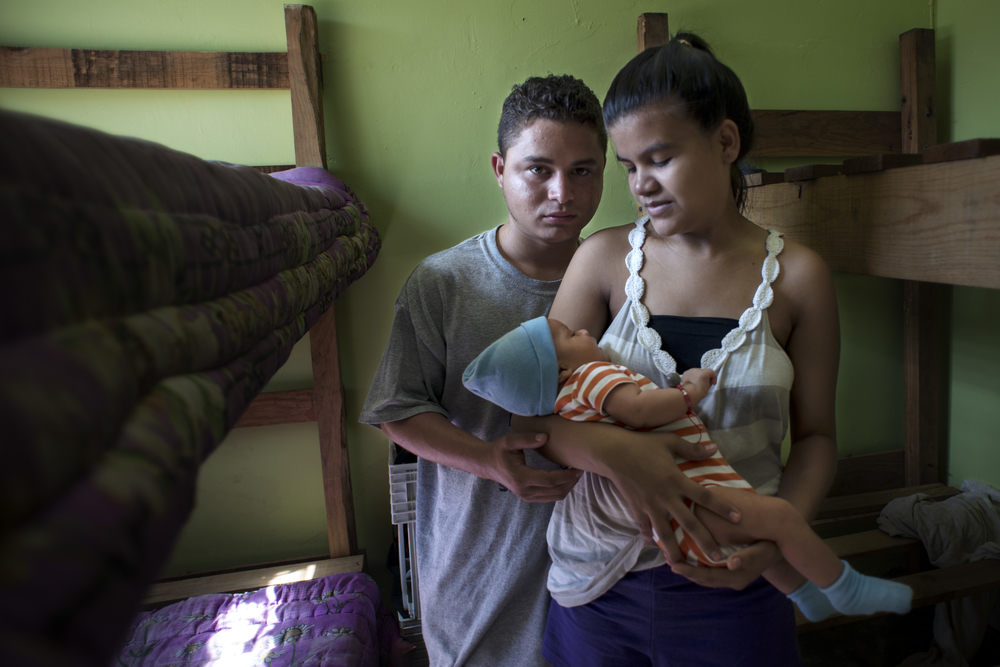 Last year, two thirds of the approximately 4,000 Central Americans who applied for asylum in Mexico were rejected by the Mexican Refugee Agency, COMAR. The number of asylum requests is expected to double this year and amid pressure from activists and better training, the rejection rate has dropped to one in three cases.

NGOs and the UN’s refugee agency, UNHCR, are trying to raise awareness about refugee rights in the country, but there’s much still to do.

Many of the fleeing Central Americans don’t even know they could be eligible for refugee status, and those who are detained are rarely informed about their right to apply for asylum before being deported. Others are determined to reach the US, where they have family or friends.

There are concerns that too many genuine cases are still being rejected by COMAR, especially those who apply without support from lawyers, according to research by the Fray Mattias centre.

As Perrine Leclerc, director of UNHCR in Tapachula, put it: “Many of the people fleeing violence in the Northern Triangle need international protection, but most are still not getting it.”

(TOP PHOTO: Emily Rivas, a teenage girl from Guatemala, left her country after refusing the sexual advances of a gang member. After her boyfriend was killed by the gang, Emily and her family fled to Mexico where they have been granted refugee status. Encarni Pindado/IRIN)

*names have been changed to protect identities