Decades after communism crumbled around the world, the revolution continues in the mountains of Mindanao, where it is tearing apart indigenous communities that cling to their lands and traditions.

Known collectively as “Lumads”, indigenous peoples on the island in the southern Philippines have been fractured by a 47-year war between the government and the communist New People’s Army. Once a mighty revolutionary group that battled the military throughout the archipelago, the much-diminished NPA now focuses its fight in Mindanao and recruits heavily amongst the Lumads.

While some Lumads support the government, the army regards many with suspicion. Allegations of military abuse pile up along with deadly attacks by shadowy assassins. Violence has driven many from their homes.

About 2,000 Lumads have been sheltering at a sports stadium in the city of Tandag since September 2015. Approximately 700 more are camped in Davao City on the grounds of a United Church of Christ in the Philippines compound called Haran. Three children were among five people injured when the compound was torched in February: one in a steady stream of attacks on Lumads that seem to occur with great impunity. 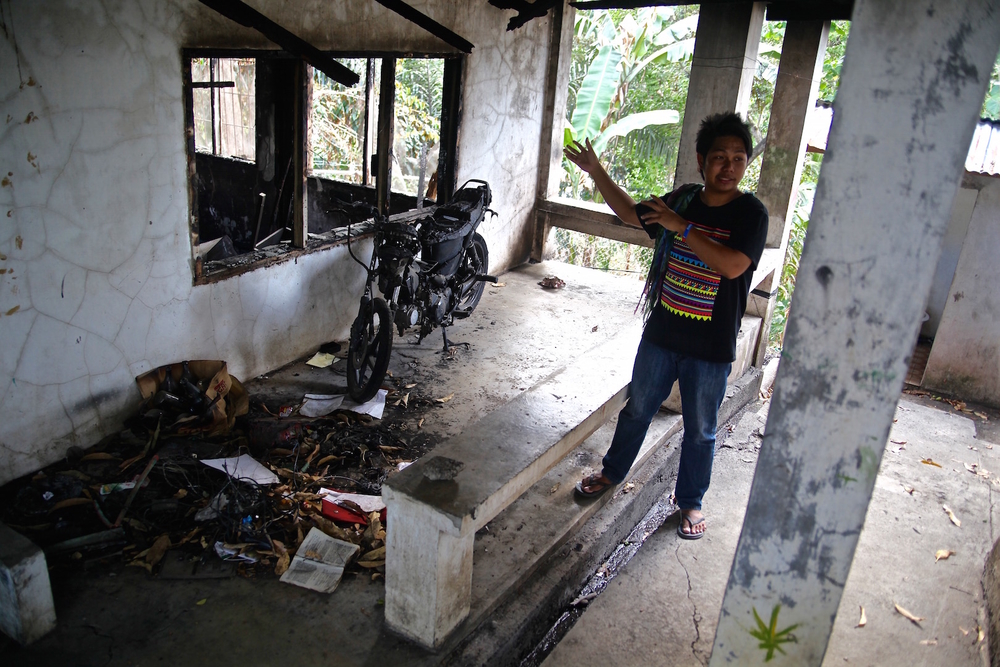 SEE: Are indigenous Filipino's being murdered for anti-mining activism?

Elen Malibaas, a grandmother and chairwoman of a farmers’ organisation, arrived last August after she was imprisoned by the military along with a handful of other community leaders. She was released after a month, but soldiers threatened to kill her if she spoke out about her experience, and she didn’t feel safe staying at home.

“The military interrogated me while I was in prison, saying I was a member of the NPA,” said Malibaas, sitting in her family’s tiny hut made from tarpaulins and strips of bamboo. “But it’s not true.”

It’s a classic dilemma of insurgency: the NPA draws support from those who have suffered oppression, but that exposes these communities to allegations that they are secret members of the armed group, or at the very least brainwashed communists.

“These people in Haran are the people that were indoctrinated by the NPA,” said Major Ezra Balagtay in an interview at Eastern Mindanao Command, a sprawling base on the outskirts of Davao City.

The NPA was formed in 1969, and was backed by China in the 1970s. The group continued to grow in strength and numbers until the end of the Ferdinand Marcos dictatorship in 1986, when it had an estimated 26,000 troops.

It fell into decline in the late 1980s and ‘90s when it apparently received support from former Libyan leader Muammar Gaddafi, according to a classified United States diplomatic cable released by WikiLeaks. The Philippines government has also accused North Korea of supporting the rebels.

These days, the NPA has only a few thousand fighters and concentrates half of its resources in Mindanao, said Balagtay. Lumads account for three quarters of NPA members who have surrendered to the government in the eastern half of Mindanao, where 90 percent of guerrilla camps are in indigenous territory, according to military figures.

That puts the Lumads squarely in the middle of the war, caught between both sides and frequent victims of violence. Those sheltering at Haran say they won’t return to their villages unless the military leaves.

Balagtay said the military could not retreat from areas where the NPA is active, but added that the locals have nothing to fear. “We are there to protect them,” he said. 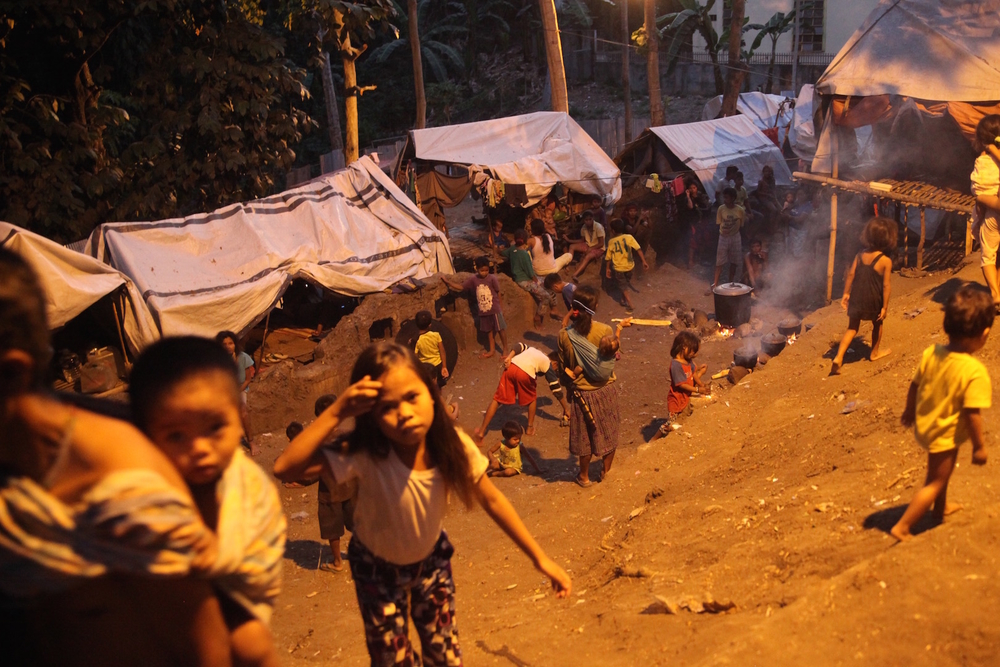 Those at Haran scoffed at that suggestion. They said the NPA passes through villages sometimes, but its fighters live in camps in the mountains. Military units and government-aligned militias, on the other hand, routinely commandeer people’s homes and public buildings like schools.

The major denied the allegation, but rights groups have documented the practice. Save Our Schools showed IRIN photos of soldiers occupying school buildings.

Even more disturbing and divisive is the role of paramilitary groups, which have been linked to extrajudicial killings. These include the Magahat Baghani Force, which is a Lumad term that translates roughly as “tribal defence force”.

Balagtay agreed that such groups are fighting the same enemy as the military, but said there is “no connection”. He insisted the groups were formed within indigenous communities to protect themselves from the NPA.

Many people don’t buy that argument, including Jimmy Pimental, the governor of Surigao del Sur Province. After a September attack by the Magahat drove thousands of people to take shelter in the stadium in Tandag, he told reporters: “The military created a monster.”

Human Rights Watch reported that Magahat members raided a school in the town of Lianga before dawn on 1 September, breaking down dormitory doors and herding students and teachers outside. In front of about 200 witnesses, they shot a school administrator and community activist named Dionel Campos in the head, and then killed two more men.

An army battalion was camped less than 100 metres away and knew the Magahat was in the area, yet soldiers did not intervene even after hearing gunfire, nor did they inspect the scene afterwards, according to HRW.

Balagtay disputed that version of events and said the soldiers sent a foot patrol to investigate, but it was too late to prevent the attack. 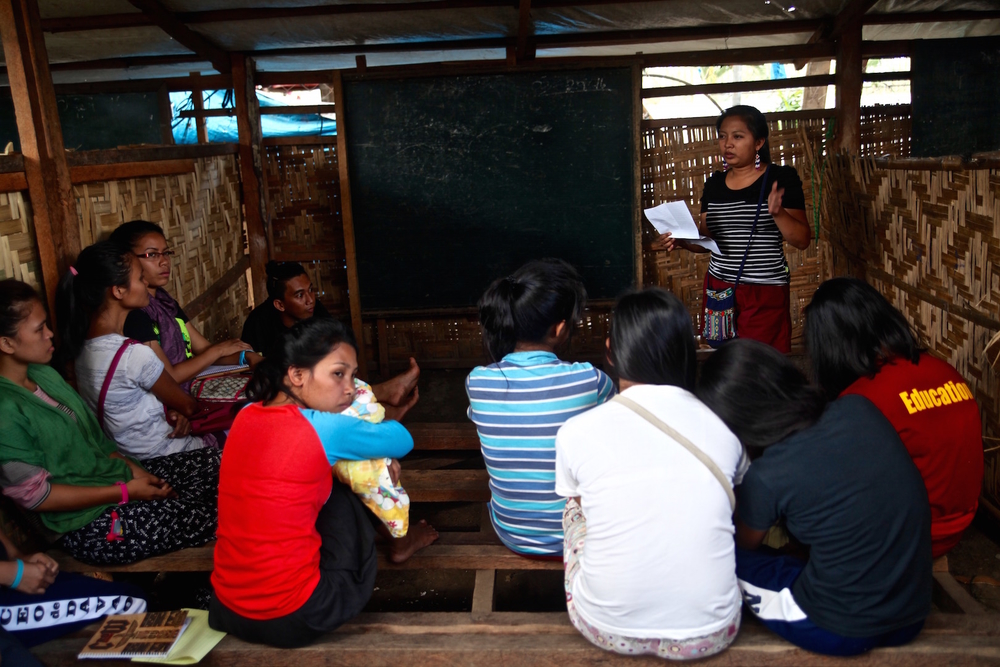 Lumad communities have also become a propaganda battleground, with a flurry of statements released around the anniversary of the NPA’s founding on 29 March.

In a colourfully-worded statement, NPA spokesman Rigoberto Sanchez accused the military in Mindanao of “running like a rabid guard dog” and “leaving a bloody trail of human rights violations in its wake”.

For his part, the chairman of government’s peace negotiating panel, Alexander Padilla, accused the NPA and the Communist Party of the Philippines of imposing a “regime of arson, extortion, and murder”.

“After 47 years of armed struggle, the CPP/NPA must realise that, in spite of their avowed intentions to resolve the ills of society, their bloody rebellion has become part of the problem,” he said in a statement.

There is one thing that all sides seem to agree on: the Lumads have suffered. They are wary of the government, because they have been oppressed for generations and had their lands taken from them.

Despite a widespread consensus that more needs to be done to support indigenous communities in Mindanao, there is little development, and peace negotiations with the NPA collapsed in 2011. As the government and the NPA argue over terms to start talks again, gunmen roam Lumad homelands and the violence continues.