This article is part of our in-depth coverage. Read more like this...
TACLOBAN

“Before Haiyan, all we had on Grindr was mehhhh – four or five people. After Haiyan, boom – white men!”

Jericho*, 28, finds it hard to recall much of a social scene in Tacloban before Typhoon Haiyan. A senior manager at one of the Filipino city’s most expensive hotels, he recounts a routine that consisted of going to the gym in the morning and walking home along empty streets after dark in a city where “everyone knows everyone.”

Out to his friends but closeted at work, he would escape to Cebu or Manila to party at gay clubs, where his babyface features with gym-buff arms got him attention. Jericho didn’t share the pageant-fever or Imelda-nostalgia of other gay Taclobanons, some of whom proudly recite the factoid that former first lady Imelda Marcos was winner of their city pageant back in the day. Jericho’s main frustration was that his hook-up app of choice – Grindr – kept coming up with the same five familiar torsos, which didn’t really count in his opinion as a proper gay scene.

Typhoon Haiyan, which hit Tacloban hard in November 2013, was clearly a disaster, but it was also a powerful gust of change, not least in Jericho’s social life.

While some residents have left Tacloban to cope with trauma or find work, the city has welcomed an influx of professional aid workers, able-bodied gap year volunteers, and fellow Filipinos seeking opportunities and hoping to help in the recovery. 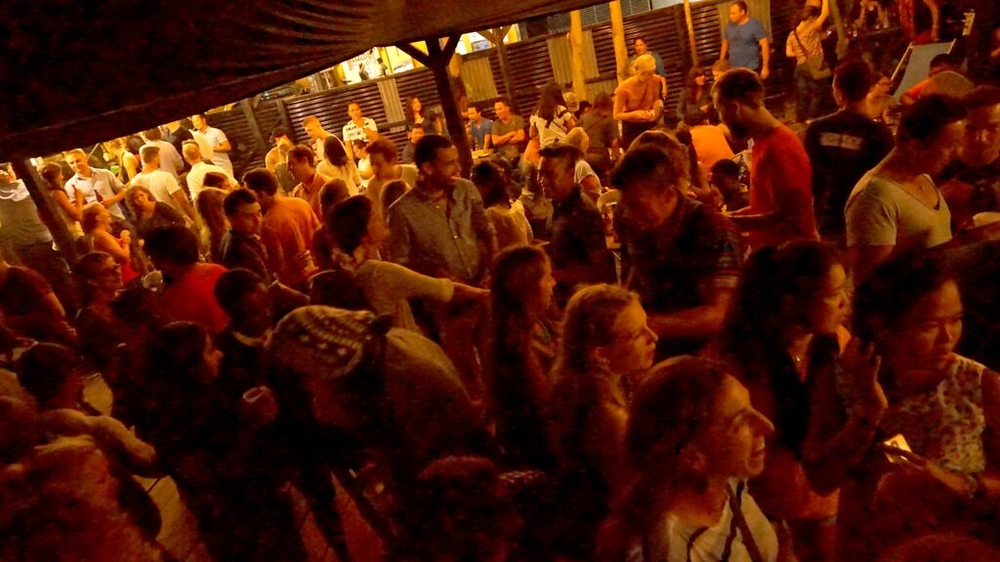 Jericho and his friends – a convivial cohort of film-school creative types, community leaders and offbeat local entrepreneurs – have met and befriended many humanitarian workers over the past year.

In the immediate aftermath of Haiyan, patchy mobile phone signal notwithstanding, survivors longing for intimacy turned to Grindr to arrange discreet meet-ups with aid workers, who themselves sought distraction.

Levi, 26, tells me how Grindr helped him meet a French-Canadian volunteer in Tacloban: “He didn’t have a very clear picture so I wasn’t sure what to expect. When I met him in his hotel, I thought, ‘Mmm, nice!’ He just asked me how I was and whether I lost my home. But I didn’t really give him details. I just wanted him.”

Levi chuckles throughout our interview while narrating the novelty of his one-night stand – his first with a white man. As he speaks, it becomes clear that this was the type of sex that was for the moment, and nothing more. Having come face to face with how suddenly and completely all could be lost, there was no expectation of longevity or commitment.

Hong Kong-based Scottish expat Aidan met David, a Filipino health worker, through Grindr back in January 2014. A weekend volunteer for his friend’s NGO, the green-eyed Aidan shares with me how he used Grindr whenever he visited new cities. “I wanted to tour Tacloban like I would other cities – with a friendly local who could show me around. Grindr makes that easy!” Aidan chatted with David on Grindr and agreed to rent a motorbike with him for a tour of scenic San Juanico Bridge.

In a separate interview, David gives me his own version of their meet-up. Tired from his hospital duties, David was excited to escape from downtown and make friends with a foreigner. “Aidan made quite the impression when he arrived to pick me up,” he recalls. “My colleagues were so jealous because he’s hot. They even had a picture taken with him!”

The one afternoon they spent together was comprehensively captured and captioned on David’s Facebook page. Today, they keep in touch only via the occasional greeting or like on Facebook.

Global values in a small town

Just as humanitarians have forever changed local politics and economy through their relief work, their presence in restaurants and bars has often caused extraordinary, if unintended, changes to social life.

While gay Tacloban has previously had leaders to give public visibility to issues of discrimination, such as the transgender councillor Jom Bagulaya, gay Taclobanons mention how spending time with foreign aid workers had led LGBT people to become more open and expressive in everyday life.

“I observed humanitarians as being very publicly affectionate,” shares Jericho. “Unlike us Filipinos. We’re more disciplined. So when I see them get drunk and guys kiss other guys and girls kiss other girls, I say to myself, ‘Cool! It shouldn’t mean anything.’” As a Catholic who still sometimes speaks of hanging out with humanitarians in the language of “temptation” and “sin”, Jericho feels that foreign visitors have loosened up some of Tacloban’s small-town anxieties.

On Burgos Street, a few steps away from the hotels and headquarters of aid workers, a mobile truck bar parked on a pebbled lot serves expat-priced San Miguels, imported beer, and Brazilian cocktails. Beside it stands an al fresco burger joint with boho trappings: reclaimed wood furniture, snacks served on cutting boards, even vegetarian options. The owners claim they were inspired by the hipster food scene in Maginhawa, Quezon City, but after a glimpse of their global clientele, Brooklyn, New York seems like a better comparison. Jericho’s stories suggest the laid-back vibe in these spaces makes being gay normal and unfussy.

He shares with me how a closeted friend of his came out as gay while chatting up foreign aid workers in the truck bar. After several drinks, a humanitarian asked his friend point-blank whether he liked guys or girls – a question Jericho was always too embarrassed to ask. Put on the spot, his friend casually admitted to being gay, a non-event greeted by the foreigners with nonchalance. The absence of ceremony with made it an achievement twice over.

In order to prevent exploitation and abuse of power, humanitarian agencies have traditionally imposed strict guidelines on sexual relations between staff and beneficiaries, even between foreign and local employees. However, aid workers interviewed for this article said there were grey areas, especially when it came to relationships with more well-to-do locals who are not the actual beneficiaries of aid – such as the middle-class-skewed demographic facilitated by Grindr in tech-savvy Tacloban.

“People are people, right, so while I understand why policies are in place, you can't stop people fancying each other, wherever they live,” says Richenda, a 28-year-old British evaluation officer active in the Haiyan response. Indeed, recent books such as The Need to Help argue that humanitarians’ everyday practices and relationships form a basis for “real political work”. In Tacloban, these laid-back drinking spaces are often regarded by agency workers as among the best brainstorming and networking venues, forming the personal bonds carried through in formal cooperative work.

The stories of Jericho and his friends are the inspiring stories of gay Filipinos who discovered – and seized – the opportunities that arose out of disaster. Their experiences shed light on the gay community’s studied resilience, having previously endured other calamities of homophobia and crises of identity.

Their stories are also exceptional, as most others have not been nearly as lucky after Haiyan. Inequalities remain. Middle-class gays have recovered faster, while working-class gays have struggled to make ends meet. While one group interacts with humanitarian workers only in social spaces, the other meets them only when receiving handouts.

In Tacloban, the recovery is far from over, and the lasting impact of humanitarians’ global values to the local LGBT community has yet to be measured. New social freedoms and opportunities enjoyed by a few may or may not reach and inspire the most marginalised in the community.

Unlike those who have felt more accepted and liberated after Haiyan, some working-class gays, including transgender people, have had to make less welcome changes. As I heard from an effeminate pedicurist who took up a new job in macho construction work to help his family, “Life is harder now. I hope people recover so they have time to beauty themselves up.”

* all names have been changed for anonymity

This article is adapted from an essay published in TEAM magazine.