Sri Lanka's government is scrambling to ease the impact of record harvest losses on millions of farmers as the country enters its tenth month of an acute dry spell.

“It’s severe. In some areas in the North, North Central and Eastern Provinces, the water levels in the irrigation reservoirs will be sufficient only for drinking purposes and that, too, will be barely enough. No harvesting will be possible [until the next rains],” Lalith Weeratunga, secretary to President Mahinda Rajapaksa and the country’s top-ranked public official, told IRIN.

According to UN Office for the Coordination of Humanitarian Affairs (OCHA), more than 1.8 million people (9 percent of the island’s population of around 20 million) have been affected by the drought which is still ravaging 16 of the country’s 25 districts.

Weeratunga and other government officials said they had already put relief measures in place, including a US$10 million plan for cash-for-work programmes for drought-affected families.

Finance secretary Punchi Banda Jayasundera said the plan aimed to repair and renovate irrigation reservoirs and canals using labour from the more than 111,000 affected families. One member from each family will be provided at least 12 days of work per month.

“We realize that these are short-term measures, but they are aimed at easing the most immediate impacts, [and] affected communities’ income levels. We need to come up with long-term measures that will mitigate the impact of extreme weather events,” Weeratunga said

“Farmers will have an off season this time,” Jayasundera said, adding that the labour intervention aimed to benefit families that derive much of their income from agriculture, which makes up around 10 percent of the country’s $60 billion GDP.

The country’s rice harvest is likely to be down about 17 percent from the 4 million tons recorded in 2013, which would make it the lowest in six years.

“We need to set a value to resources like water, so that we conserve it when we have it. When we don’t do that, we see the results of that negligence”

Jayasundera told IRIN that, in anticipation of price rises, the government eased restrictions on rice imports in late April. This year it plans to import at least 100,000 tons - around 2.5 percent of the 2013 harvest.

“Rice imports will continue until the harvest picks up,” Jayasundera said.

However, it appears unlikely that crop outputs will improve in the near future, and not only Sri Lankan consumers but also farmers themselves will rely more heavily on imported food as a result.

“The South West Monsoon, which hits the island nation between May and September and brings the majority of annual rainfall, has been below average this year, prompting losses in ‘planted extent’ [cultivated land area for 2014]”, explained J. D. M. K. Chandarasiri, director at the Hector Kobbekaduwa Agrarian Research Institute in Colombo.

According to government statistics in eight districts severely affected by the drought (Anuradhapura, Polonnaruwa, Hambantota, Puttalam, Mannar, Vauniya, Moneragala and Ampara), the planted extent was 42 percent below what was recorded in 2013. 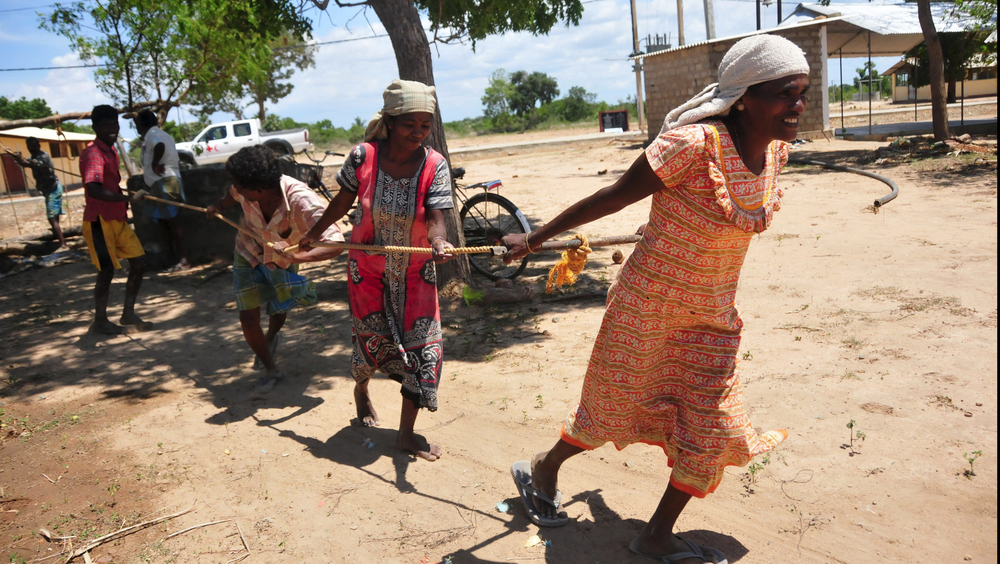 “Losses are likely to mount because of lack of water,” Chandrasiri said, explaining that the mid-year planting season relies heavily on irrigated water and his office was already receiving reports indicating high losses. The next rains are not expected until mid-November.

“We are likely to lose a major portion of the mid-year harvesting season,” secretary Weeratunga said.

Finance Secretary Jayasundera said the government was receiving weekly drought updates from the provinces and was prepared to take further action such as increasing food imports if the need arose. But he also admitted that the impact of changing climate patterns was a major concern for long-term policy planning.

“The impact on people’s livelihoods is our primary concern,” he said. Extreme weather events are nothing new for Sri Lankan policymakers. Since 2009, the country has faced at least seven major floods and two major droughts.

Weeratunga said the time had come to look beyond reactive measures to tackle natural disasters like drought and floods.

“We need to set a value to resources like water, so that we conserve it when we have it. When we don’t do that, we see the results of that negligence,” he said.

Government interventions to mitigate the impact of fluctuating rainfall on the electricity sector could offer a roadmap for further long-term planning.

According to Jayasundera, a 2012 drought led the government to spend a large amount of foreign exchange - in excess of $2 billion - to import furnace fuel to compensate for the loss of hydropower generation capacity.

During years when the rainfall is on a par with average levels, the country derives 50 percent of its power needs from hydropower; when the rains fail (such as this year), that percentage falls. Government figures put current hydropower generation at just 34 percent.

According to Weeratunga, planning needs to extend to areas such as agriculture. “We are looking into planning for future extreme weather events and their impact,” he said.

Local challenges, including convincing rice farmers to shift to other crops such as onions and maze when the rains fail, remain daunting, experts say.

According to Chandarasiri, the agrarian expert, Sri Lanka’s rice crop relies on traditional practices handed down through generations that determined the type of seed, water levels and harvesting patterns. Harvesting patterns based on scientific research were taking time to gain acceptance.

“We have tried to change behaviours, but it will take a lot more effort and convincing to get farmers to ditch traditional harvesting patterns.”