The 101 civilians holed up in two large tents and a washroom block in a  UN base in the South Sudan city of Rumbek may form one of the smallest such groups now protected by peacekeepers, but their conditions and fears are typical of the 75,000 people now living in such bases across the country.

"We haven't faced this before," said Rejoice Chan, who works as a recovery, reintegration and peacebuilding officer for the UN Mission in South Sudan (UNMISS).

Around a dozen armoured personnel carriers and trucks form a three-metre-high wall on one side of the camp. Rocks have been thrown by the host community at the IDPs on two occasions. The trucks act as a barrier and a deterrent. "They think there's someone inside," a camp resident said.

The UN here is doing what it can - providing protection and limited medical assistance and shelter, as well as advice to IDPs, and is coordinating assistance - but it is not a permanent solution. "We're not a humanitarian organization, we're peacekeepers," Chan said.

Klaus Steiglitz, vice-chairman of Sign of Hope, an international humanitarian organization, likens the conflict to pulling at the thread that holds the social fabric of South Sudan together. "Where we had integration of different tribes in a city, now, as the conflict breaks out, disintegration takes place," he said.

Nuer students who had chosen to study in Rumbek now only feel safe with UN protection in this predominantly Dinka town.

A number of the IDPs in Rumbek were serving as police officers on the border with Warrap, another predominantly Dinka state, when the crisis began. David Kiuch, one of the police officers, says he was disarmed by his superiors on grounds of ethnicity. When quarrels broke out between members of the two ethnic groups and those who were still armed shot three people, he and the rest of the Nuers fled, he says. Authorities picked them up and delivered them to Rumbek police, before they brought them here.

Mary Nyataba, 28, a Nuer from Bentiu, was passing through Lakes State on a bus when the crisis hit. She immediately got off the bus and got a motorbike driver to take her to the nearest UNMISS base. "I don't know anyone here in Rumbek," she said.

Insecurity and fear has radiated across the country, dividing South Sudan's two largest ethnic groups. On 18 December over 100 Nuer people arrived at the UNMISS base in the town of Rumbek. They had heard that the UN would guarantee their safety. In accordance with their mandate to protect civilians, UNMISS let them in.

Two months later, they are nearly all still here. With more peacekeepers due to come in, space is an issue. Sanitation is challenging: there is no hand-washing facility outside the latrines and UNMISS doctors are complaining of high levels of diarrhoea. Residents say that many do not have mosquito nets. With only two large tents, one for men and one for women, many are forced to sleep outside. Charcoal and firewood are scarce.

Juba is more chaotic than here ... even though here there's nothing at all

The World Food Programme is currently providing food to those in the Rumbek base.

“WFP is committed to continuing assisting as many people as we can reach who have been uprooted from their homes or otherwise affected by the South Sudan conflict. This includes those sheltering at UNMISS bases, where WFP has been providing regular assistance since December,” said WFP Senior Regional Spokeswoman Challiss McDonough in an email.

“At the beginning of the crisis we launched a three-month emergency operation aimed at assisting 400,000 IDPs, which was the humanitarian community’s prediction for the scale of displacement at that time, but we were always aware that those plans would need to change as the situation evolved. We are now revising our emergency operation and expanding our response in South Sudan to extend food assistance to 2.5 million conflict-affected and food-insecure people over six months,” she added.

Nyakuma Wuor, 24, is feeling the pressure of confinement, having been stuck in this 100sqm area for two months now. She says she would be happy to hear of transport to Bentiu, despite reports of fighting there. She has not heard from her husband since the crisis started but believes her six-year-old child is in Bentiu with the child's grandmother. "We need schools," she said. "I'm sick of this situation. You feel isolated and bored staying in one place. I'm not happy or comfortable at all."

“In Juba it's worse than here”

More than 20 people have requested transport to Juba, a move that UNMISS officials have strongly cautioned against. The UN now has 30,000 people living in its two military bases in the capital. Conditions are dire and the rainy season in April fast approaching. "Juba is more chaotic than here. In Juba it's worse than here, even though here there's nothing at all," said Chan.

The governor of Lakes State has tried to make the Nuers feel safe, local members of the IDP camp committee say. But the governor's words do not translate into reality on the ground, according to residents. Samuel Lam, a representative for the Rumbek IDPs, said one woman was tied to a chair in the central market for nothing more than speaking the Nuer language. Civilians called the police, who detained and investigated her for an hour. Since that incident, all camp residents going into town, either to grind maize or purchase essential goods, do so under the escort of the Non-violent Peace Force, a US peace-building organization .

This is working well, Lam says. He is a first-year economics student at the University of Rumbek. Classes resumed in mid-February but he is not ready to go back. For now, he is keeping himself busy by giving lessons to younger students. He said he is pinning his hopes on peace talks in Addis Ababa. "The country is in a dilemma," he said.

Across the country, tens of thousands of people trapped in bases are waiting, and tensions among them are simmering. In January, senior UN Human Rights official Ivan Simonovic called it "unprecedented" that the UN has opened up its bases to people in need to such a degree. Nationwide, there are now around 75,000 civilians in UN bases around the country.

Children play with stick figures and guns made from mud at the UNMISS base in Rumbek, Lakes State, South Sudan. 18 February 2014 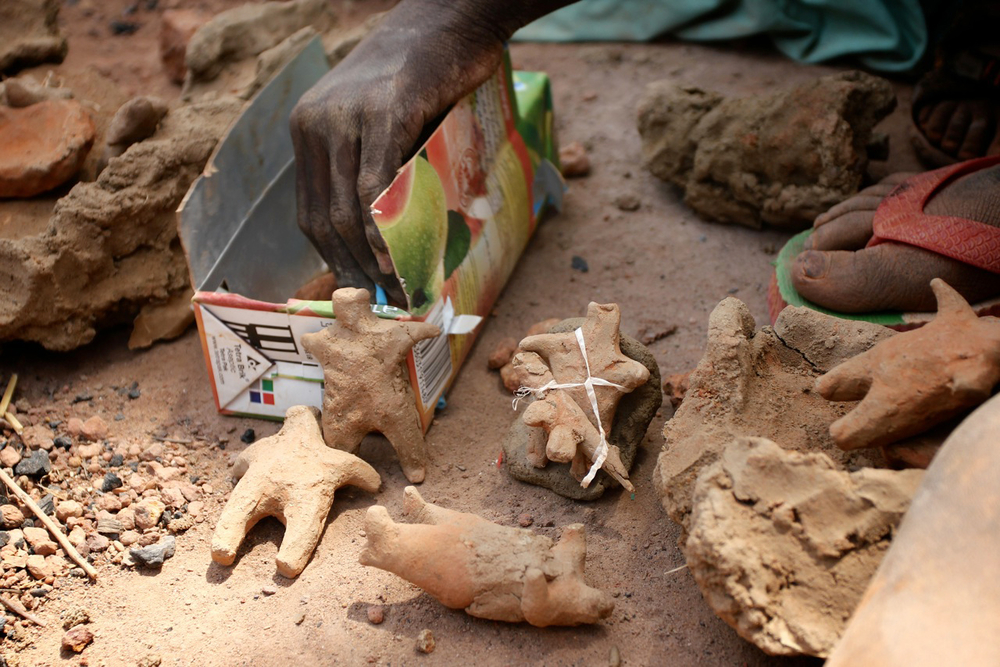 Bases housing people from more than one ethnic group are faced with the challenge of controlling interethnic clashes as they arise. In Malakal, the UN has reported clashes within a compound in which 21,568 are sheltering. While fighting raged outside the base, tensions reached boiling point inside. "Simultaneously, inter-communal clashes flared up within the Protection of Civilians site [...] which also came under cross fire," a report from UNMISS said.

The situation was contained by UNMISS troops and Formed Police Units, but casualties were sustained. Ten people died in the UNMISS hospital from injuries received both within the compound, and from clashes in the Protection of Civilians area. “Fighting outside the compound compelled UNMISS troops to concentrate on protecting the perimeter of the camp from this external threat. Violence then re-erupted in the Protection of Civilians area within the UNMISS compound," the UNMISS statement said.

Air evacuation from UN bases will not be possible unless civilians are under imminent threat, according to Chan. The Rumbek IDPs have requested that the government relocate them. "The request was rejected by the government because Lakes [State] is calm," one said. Calm or not, their fear and perception of a threat is incontestable.

The UN is calling on all parties to respect the ceasefire agreement. Altogether in South Sudan, 872,900 people have now been displaced, according to a UN Office for the Coordination of Humanitarian Affairs update of 17 February. The crisis response plan is only 18.5 percent funded, leaving a shortfall of US$1.04 billion. The rainy season is due to start in less than two months. Addressing the question of what to do with those inside UN bases is becoming critical.

*This report was amended on 26 February to correct details of WFP's assistance plans.