Weeks of conflict in South Sudan have left thousands of people dead and forced tens of thousands to flee their homes. Thousands of the displaced have been arriving in northern Uganda, where their situation is dire and has elicited security concerns.

“The number of people running from South Sudan to seek asylum in Uganda has gone up. We are now at 25,000-plus asylum seekers who [have] register[ed] at Elegu reception centre,” said Dokar Mudashi, a UN Refugee Agency (UNHCR) official, at Elegu in Amuru District.

Elegu, one of the refugee reception centres in the north, is receiving about 1,000 refugees daily, among them expectant mothers, some of whom have given birth en route. “When the mothers arrive, we immediately immunize their children and provide some care, like energy foods,” said Mudashi.

According to UNHCR spokesman Adrian Edwards, in a 14 January update, "In all, 42,654 mostly women and children, from Nimule in South Sudan, are now in the Ugandan districts of Arua, Adjumani and Kiryandongo." Since mid-December, at least 78,000 people have fled South Sudan for neighbouring Ethiopia, Kenya, Uganda and Sudan.

The refugee influx is stretching basic services at the Elegu reception centre. Another centre at Dzaipi, in Adjumani District, is not faring any better. Both centres have few toilets. The water, food, medical care and shelter supplies are also inadequate.

I can’t imagine I am here alive. Things are terrible in Bor: killings, killings and killings. People are lying dead, left unburied

According to UNHCR, Dzaipi has the largest concentration of refugees, with more than 32,500 people, yet it was designed to host only 400, “so most of those there are having to sleep in the open with their children.”

At Dzaipi health centre III, which has been designated by the local government to provide health services for the refugees, staffing and medication is inadequate.

“We are in [a] crisis of drugs, sanitary [products] and staff. Four refugees have been diagnosed with hepatitis B. The number of expectant mothers is high, so we call for more assistance from well-wishers to help these people,” Beatrice Masudio, who is in charge of the health centre, told IRIN.

Over the last two weeks, at least 2,000 refugees, most of them children, have sought care there for malnutrition, malaria, diarrhoea and dehydration.

Makerere University’s Refugee Law Project (RLP) is conducting a situation analysis, assessing the condition of the refugees and the capacity of the two reception centres.

According to Godfrey Byaruhanga, the officer in charge of refugee management at Uganda’s Office of the Prime Minister, the South Sudanese arrivals are in desperate need of help. “We are calling upon United Nation agencies, non-governmental organizations and agencies to come in support of the situation,” he said.

Besides inadequate basic services, concern is growing over possible inter-ethnic confrontations among the new South Sudan refugees in Uganda. There are fears that some may be in possession of small arms.

“We are engaging security organs like the police to collect these unauthorized items from refugees, but we are [also] resettling the refugees at different places,” said Byaruhanga, specifying that to avoid conflict, the Dinka will be settled at Nyumanzi while the Nuer and Morolem ethnic groups will be settled at Boroli.

An elderly woman rests alongside her three young grandchildren at the Elegu refugee reception centre in northern Uganda. At least 355,000 people have been displaced and thousands killed in South Sudan since mid-December when inter-ethnic conflict erupted 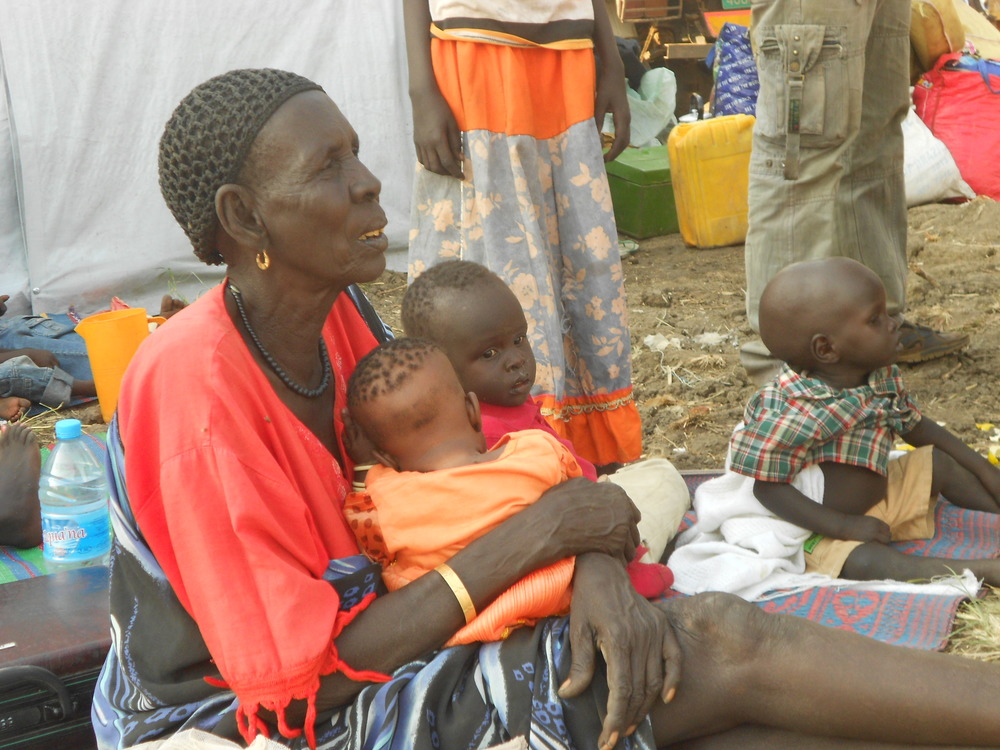 There is growing tension within the host community, too.

According to Anthony Atube Omach, an Amuru District official, some South Sudanese refugees who had camped at Elegu Primary School have been relocated to stop them from encroaching on locals’ land. “It was creating another conflict because local people in the area felt deprived of their resources and infrastructure,” he explained.

The northern Uganda region has some of the lowest human development indicators in the country and is still recovering from a two-decade-long insurgency by the rebel Lord’s Resistance Army (LRA); during the insurgency, thousands of people were displaced for years.

According to Lyandro Komakech, who led Makerere University’s RLP team, the security situation in refugee-receiving areas has deteriorated.

There are also fears of LRA infiltration. LRA troops were pushed out of Uganda by the army in 2006, but they have established new bases in the Central African Republic , the Democratic Republic of Congo  and South Sudan.

Back in South Sudan, the situation remains tense, according to asylum seekers who fled Jonglei and Upper Nile states.

“This is a big shame to the people of South Sudan - from the international community [to] leaders we entrusted to lead South Sudan,” added Akech, who arrived at Elegu on 18 January alongside 13 of his children and other dependants.

Some of the elderly refugees, who were said to have participated in South Sudan’s liberation struggle from Sudan, blamed the conflict on poor governance.

“I knew that the country was spiralling into conflict soon after we seceded [in 2011], and now here we are. The leaders are corrupt, insensitive to [the] poor living condition of local people. Soldiers and their commanders are undisciplined, and now they are turning to tribal lines,” explained 78-year-old Joseph Aguto.

South Sudan gained independence from Sudan on 9 July 2011, years after the signing of the Comprehensive Peace Agreement , which ended decades of civil war.