The conflict in Syria has killed more than 6,500 children, turned nearly one million into refugees, and left three million inside Syria in need of aid. Some have been disabled, mutilated, sexually abused, tortured in government detention and recruited by armed groups, at as young as age 12. Many have been deprived of their education. Many more have witnessed violence.

"Millions of children inside Syria and across the region are witnessing their past and their futures disappear amidst the rubble and destruction of this prolonged conflict." – Anthony Lake, UNICEF Executive Director

After a recent trip to Syria and its neighbouring countries, Leila Zerrougui, special representative of the UN Secretary-General for Children and Armed Conflict, said she was “overwhelmed” by what she saw.

“Children in Syria not only are affected [by the violence on a] daily basis - they have lost their family, they have lost their house - but they lost … hope. They are full of anger. And if this continues, we will face a generation of illiterates," she told a press conference.

In Lebanon, where hundreds of thousands have sought refuge, the NGO Najda Now helps children recover from trauma through theatre and art. Usually, children’s drawings are dark in colour and theme when they first arrive; they become more colorful and positive over time. Most of the time, children draw two things: what they want and what they are afraid of.

IRIN visited Najda Now’s psychosocial support centre "Tomorrow is Ours". Here are a few of the children we met.

Ahmed, nine, left Homs because of intense air bombing. He spent some two years in Syria amid the conflict; and this environment became normal for him. He talked about it as if it was just a movie. He was lucky enough not to have seen any violence himself, but had some temporary trauma when he arrived in Lebanon one month ago, psychologists said, mostly linked to noises. In Syria, he lived in a village in the countryside, with vast open spaces. Now, he lives in the crowded Shatila camp for Palestinian refugees in Lebanon. Ahmed drew what he wants: a spacious house, a dog, and the sea.

Ahmed, 9, left the Syrian city of Homs because of intense air bombing. He is now a refugee in Lebanon, where the NGO Najda Now has encouraged him to express himself through art. He has drawn the life he wants: a spacious house, a dog, and the sea 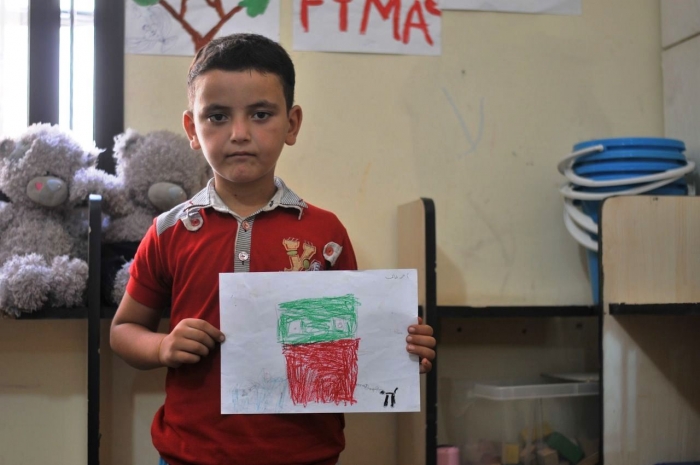 Ahmed: Because of the war.

They hit with planes and cannons.

Do you have friends here in Lebanon?

Ahmed does not answer; he seems stressed by the question.

I prefer Syria, because in Syria I have a lot of friends.

What do you remember from Syria?

Sohah, 12, says she is happy in Lebanon. The centre’s theatre classes have helped her decompress from the stress of seeing guns being shot in the air and people being transported by ambulances. Her Palestinian parents settled in the southern Syrian town of Dera’a when they sought refuge themselves decades earlier. Now, they are displaced once more. She arrived in Lebanon four months ago.

Sohah, 12, originally Palestinian, fled the Syrian city of Dera'a, where her parents had settled after fleeing their homes in Palestine. She is now a refugee once again, this time in Lebanon, where the NGO Najda Now has encouraged her to express herself t 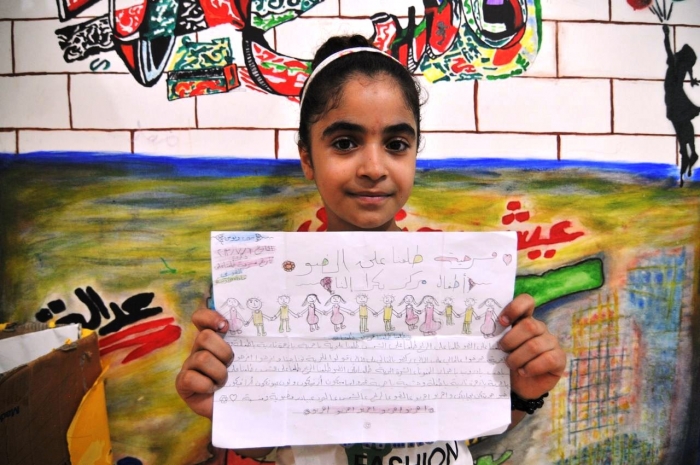 Sohah: There were a lot of problems.

Which kind of problems?

A lot of bombs and clashes with guns.

What do you like to do here in the centre?

Tell us about your drawing.

This is us when we were acting. Me and my friends are singing. I wrote the song that we were singing.

What is the song about?

It says we want peace; we want to go back to our country; we don't want war any more.

What do you want to do when you grow up?

I want to be an actress, famous around the whole world.

When Ashraf, eight, arrived at the centre from Hama six months ago, he was aggressive and fought with other children. Psychologists attribute this to what he saw and heard in Syria and stress likely passed down from his parents. Ashraf has not drawn anything; instead he is making a worm out of playdough.

Ashraf, 8, left the Syrian city of Hama because government forces attacked rebels at the entrance to the town. He is now a refugee in Lebanon, where the NGO Najda Now has encouraged him to express himself through art. Here he uses playdough to make a worm 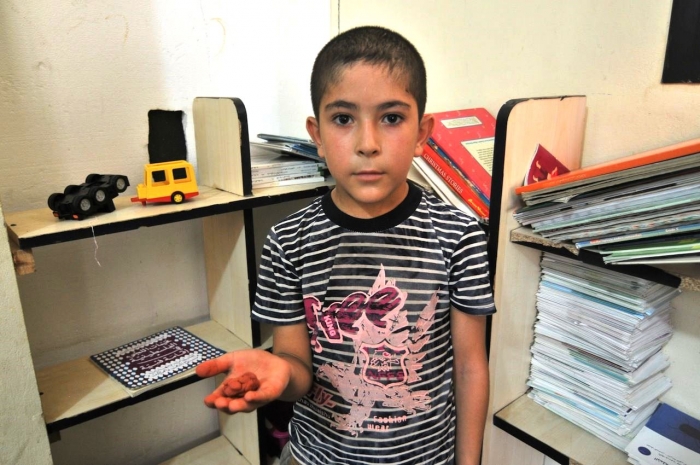 Ashraf: The government attacked the revolutionaries at the entrance of the town. We knew that the others [the rebels] would be upset and answer, and that they [the government] would attack the whole city. And that’s what ended up happening.

What do you miss about Syria?

In Syria, I played with the computer.

But here in the centre there is a computer room.

Yes, but in Syria I had a computer at home and I could play.

Do you have a drawing to show us?

Faysal's mother is a nurse. She used to treat people in their home in Rural Damascus. So by the time the 11-year-old came to Lebanon nine months ago, he had seen many corpses, including his uncle who was shot dead by a sniper on a rooftop.

Faysal, 11, left Rural Damascus in Syria after his uncle was shot dead by a sniper. He is now a refugee in Lebanon, where the NGO Najda Now has encouraged him to express himself through art. His drawing of a princess was sold at an exhibition (see flyer i 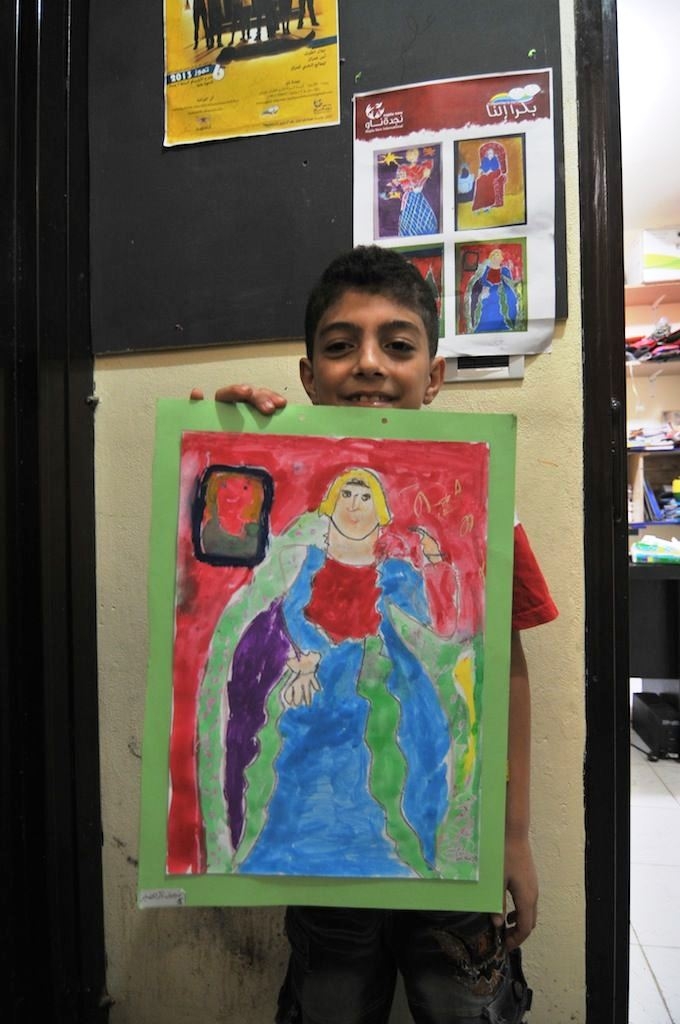 Faysal: I came to Lebanon because there were attacks in my village.

Who do you live with?

What do you miss about Syria?

My friends, my house, and my uncle.

What do you prefer: Syria or Lebanon?

I grew up in Syria, I prefer Damascus, but here I like the theatre. I prefer here for the theatre because there it didn't exist. In Damascus, I didn't know how to sing. Now, I can rap.

Can you tell us about your drawing?

I drew it based on a picture; we copied a photo. My drawings were in an exhibition and I sold two of my three drawings. The girl, she's a princess.

What do you want to do when you grow up?

I want to be a painter.