Human rights groups are calling for improved living conditions for close to 2,000 Rohingya boat people now in detention in Thailand.

“Thailand locks away Rohingya in heavily overcrowded detention centres when they should be treating them as asylum seekers who need to be protected,” Phil Robertson, deputy director of Human Rights Watch's (HRW) Asia division, told IRIN.

Since January, 1,958 people have been apprehended by Thai authorities as they make their way to southern Thailand from Myanmar and Bangladesh, often in rickety, overcrowded boats, after weeks at sea.

Calling them “illegal immigrants,” authorities have put 1,554 Rohingya men in overcrowded immigration detention centres (IDCs). Some 404 women and children are being held in government-run shelters where, according to HRW, reports of trafficking are emerging.

Most claim to be Rohingya - a de jure stateless, linguistic and religious minority group that has long faced persecution in Myanmar - fleeing the sectarian violence in Myanmar's western Rakhine State. The violence there, between the Buddhist ethnic Rakhine and the Muslim Rohingya, has been going on for over year.

Since March, according to National Human Rights Commission of Thailand, four male detainees have died of septicaemia while in detention.

The UN Refugee Agency (UNHCR), which has had access to the detainees since January, says the cramped living conditions are a source of concern.

“These IDCs were not designed to accommodate so many people for long periods of time. Overcrowding and movement restrictions can lead to physical and psychological problems for these groups that have already faced trauma in their villages and on the long journey here,” Vivian Tan, an agency spokeswoman, said.

Thai officials say that new quarters for the detainees are in the development stages, including a facility in the southern province of Songkla.

“I know [the men’s detention centres] are very crowded places, and that's why we are going to build a new centre for them to stay, which will be considered a waiting place,” said Lt Gen Paradorn Pattanatabut, secretary-general of the National Security Council.

The new centre was initially slated for construction near a former Thai army base in Thailand’s southern Nakhon Sri Thammarat Province, but those plans were put on hold following protests by local communities, who said the centre would be too close to schools and villages.

In the south, local Muslim civil society groups are providing food and meals for the men being held. Muslim women prepare meal packages containing rice, fish and curry for the men at the nearby Dan Nok IDC in Songkla.

Head volunteer Fateemoh Kaewsalam, from Ban Pru Tiew Muslim Village, was shocked by the crowded conditions for the male detainees, who are not allowed to go outside. 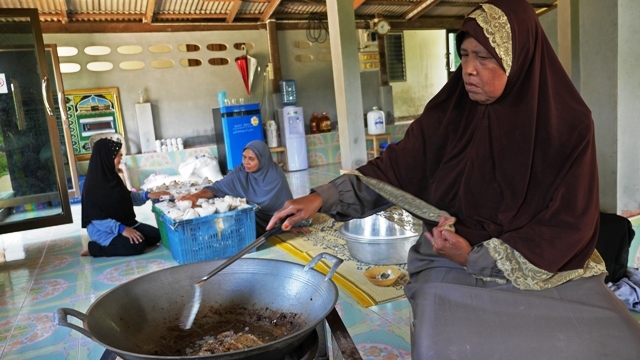 At the end of May, international media secretly filmed 276 male detainees in two cells meant to hold 15 people each at an IDC in Phang Nga Province.

“A normal prisoner can go outside their cells sometime for exercise or [to] work a little bit, but the Rohingya must stay in the closed quarters because the police say they may try to escape,” Kaewsalam said.

Thai authorities have acknowledged that no third country has come forward to offer asylum to those seeking protection as a “six-month temporary stay” that the government allowed them in January comes to an end. Under immense international pressure, the government of Prime Minister Yingluck Shinawatra agreed in January 2013 to let these Rohingya stay in Thailand temporarily, until they could be safely repatriated to their places of origin or resettled in third countries.

“We hope the relocation can happen soon, as the current situation is not sustainable. We are also hopeful that the Thai authorities will extend the initial six months of temporary protection for this group, ensuring that they will not be sent back to Myanmar given the tense situation in Rakhine state," said UNHCR's Tan.

On 26 June, a joint civil society statement endorsed by 76 organizations worldwide reiterated that concern, calling on governments of refugee-recipient countries to protect all refugee and asylum seekers from Myanmar, and to take into account the acute and specific protection needs of stateless Rohingya.

Governments should desist from arbitrarily detaining Rohingya refugees and asylum seekers and from attempting to return them to Myanmar in violation of the principle of non-refoulement, the statement said.

According to UNHCR, over the past year, more than 27,000 Rohingya - the majority from Rakhine State - have embarked on dangerous boat journeys from the Bay of Bengal in search of safety and stability in other countries. Scores have died in their attempts, the agency says, while many have endured weeks of drifting at sea with little food or water. Some were reportedly pushed back from the shores of neighbouring countries, while others have been detained upon arrival. UNHCR continues to appeal to governments in the region to keep their doors open to people in need of international protection.