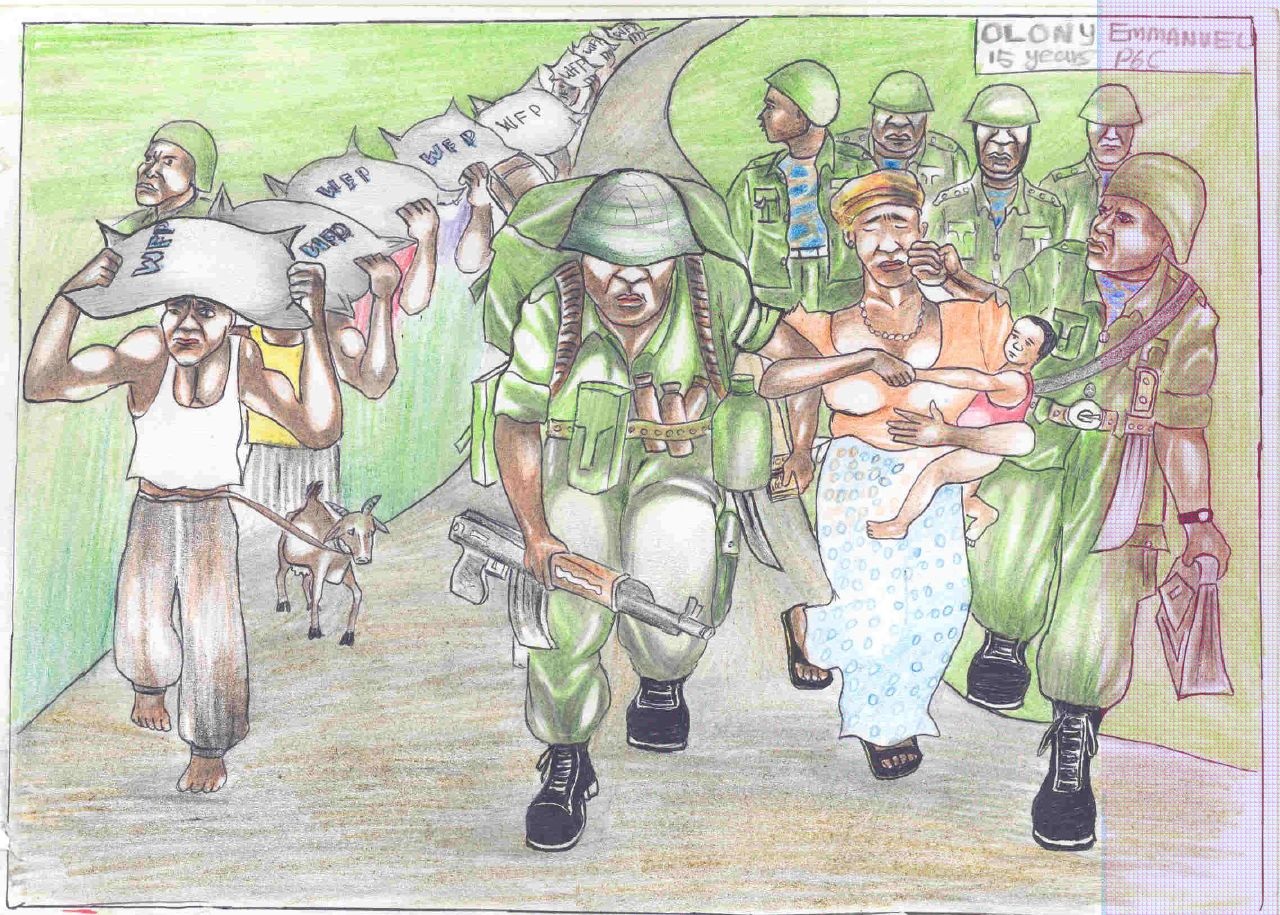 Programme manager at Child Soldiers International, a human rights organisation that seeks to end the military recruitment of all children

The conflicts have destroyed communities and created thousands of child soldiers, serving directly on the front lines, or labouring as porters, cooks, and spies. Up to 40 percent of them are girls.

In 2016, Child Soldiers International interviewed 150 girls formerly associated with some of the country's multiple armed groups.

The interviews form the basis of our new report, What The Girls Say, released today on 19 June – the UN's International Day For Elimination of Sexual Violence in Conflict. It gives a voice to former girl child soldiers, revealing testimonies that are rarely heard and often overlooked.

The hope of a better life

Of the 150 girls we spoke with, two in three had been abducted by armed groups, while one third had joined 'voluntarily'.

"We heard that we could get money there," 15-year-old Judith* told us. "I went because I wanted to get enough money to go back to school."

Similar accounts were given by dozens of girls we interviewed in South and North Kivu and Haut-Uéle, pushed into conflict because of financial hardships at home.

It is estimated that only 60 percent of girls complete primary school education (compared to eight in 10 boys).

This inability to attend school was a factor in many girls' decisions to join armed groups; self-defence militias (known locally as Mai-Mai), Joseph Kony's Lord's Resistance Army and the M23 among them.

"I was pushed out of school because my parents could not pay," 16-year-old Sara explained. "So instead of roaming aimlessly in town, it was better to go and help them in the bush."

For some though, their motivation for joining was to avenge the death of a friend or family member. Others did so because their communities were threatened and they sought protection.

"The Mai-Mai were doing bad things all the time," one girl explained. "They were looting and raping. It became so frightening and impossible to live at home. To protect ourselves, me and five others, three girls and two boys, decided to join them. We walked for two days."

Abused and exploited as “wives”

However, the hope of earning money or being protected by armed groups would never materialise.

Physical and sexual abuse, combat, hard labour and constant fear of death are common realities for children and teenagers within Congo's armed groups.

Girl's roles are far from limited to the front line and direct fighting.

Many are exploited as “wives” for soldiers, or used to carry out various domestic duties, such as looking after babies in the groups. Many will give birth to children of their own, often under very difficult circumstances.

"We were treated like toys," a 15-year-old girl said. "Lucky were those who only had one man."

The majority of the girls interviewed said they had suffered sexual abuse while in captivity.

"I was often drugged," 17-year-old Jeanette recalled. "I would wake up and find myself naked. They gave us drugs so that we would not get tired of all of them using us."

Such experiences are disturbingly common experiences for women and girls in conflict zones across the world.

The UN's international day on sexual violence in conflict was launched in 2015. The 19th of June is the anniversary of the adoption of the UN security council's resolution in 2008 that condemned sexual violence as a tactic of war, and a key date for raising awareness of this neglected area of conflict.

"Sexual violence is a brutal form of physical and psychological warfare rooted in the gender inequality existent not only in zones of conflict, but in our everyday personal lives,” UN Secretary-General António Guterres said in a report published to mark the day. “The persistence of such forms of violence undermines peace and security and shatters community and family ties."

In 2016, the UN's Congolese mission, MONUSCO, verified 514 cases of conflict-related sexual violence in Congo – more than a third of the victims were girls aged under 18. The UN's Population Fund reported 2,593 cases of sexual violence in “conflict-affected provinces” during the same period.

MONUSCO has said that non-state armed groups, including various Mai-Mai groups, were responsible for almost 70 percent of the cases.

Freeing girls from armed groups can be an incredibly difficult task. Of the more than 9,000 child soldiers released by MONUSCO between 2009 and 2015 in Congo, only seven percent were girls.

For returning girls though, life back among family and community members often brings more suffering.

Stigmatisation and rejection is prevalent, with such treatment largely shaped by the fact that they have had sexual relations outside of marriage.

"Not two days goes by without neighbours making us feel we have known men," one girl said. "We are not allowed to associate with their daughters."

Such discrimination leaves many ostracised in their communities, and deprives them of social and economic capital.

As a result, some decide to rejoin the very armed groups that abused them.

"If we leave the group, we're going to be targeted, rejected," one girl told me. "So many girls accept and continue to live with their bush husband."

Child Soldiers International’s research reveals these issues of stigma and community rejection as the main hurdles in reintegrating many girls formerly associated with armed groups in the country.

As an organisation, we are now working with the Congolese government, local partner NGOs, the UN, and community leaders to improve the treatment of girls and the assistance provided to them when they return home.

We have outlined numerous activities that can be implemented at community level to transform the lives of former girl child soldiers and the views of family and community members.

Among the initiatives, we believe education can be a very efficient catalyst for such change.

Many returning girls are deprived of education, while some don't have the means to pay, and others are shunned by family members and thus not allowed to return to the classroom.

The desire to return to school was overwhelming among the girls we interviewed in eastern Congo. One girl said: "If we could go to school, the community would be nicer to us, we would get some consideration. That would help a lot."

The lack of educational opportunities, perpetuated by community rejection, is heightened by the fact that local NGOs are underfunded and unable to help reintegrate returning child soldiers.

We spoke with several NGOs dedicated to assisting child soldiers in the region, but many of them said financial restrictions mean they were unable to help all.

One said they only had funds to help 19 out of 119 children they had identified, while another organisation added: "We know that 273 children left armed groups in 2015, [but] we are still waiting for [funds]."

Providing education is costly and there is an urgent need to come up with innovative, low-cost alternatives to reach more girls, for example through literacy and numeracy classes that can be set up using a volunteer teacher after school hours. "A woman who has not studied has no value," 14-year-old former child soldier Alice told us.

Allowing these children to return to the classroom would not only foster community acceptance but also drive long-term economic development, as would providing greater opportunities and resources in agriculture, a predominant livelihood for many in a region devastated by armed conflicts, where fields have been neglected, animals stolen, and agricultural tools pillaged.

Changing perceptions and helping improve the economic opportunities for Congo's returning girl soldiers and their communities can hopefully prevent other school-aged children being drawn into conflict and stop returning girls from rejoining armed groups.

Giving a voice to some of Congo's girl soldiers also helps raise awareness of their too-often-overlooked role in conflict.

By listening to what the girls say, we hope to help bring about change so that more girls in eastern Congo can be reached and successfully reintegrated back into their families and communities.

"I am very pleased to see that there are still people who care about our situation," one girl added. "Sometimes, we find ourselves alone without moral support. Thank you." 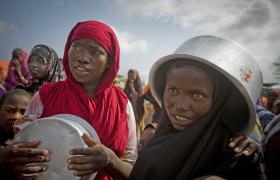