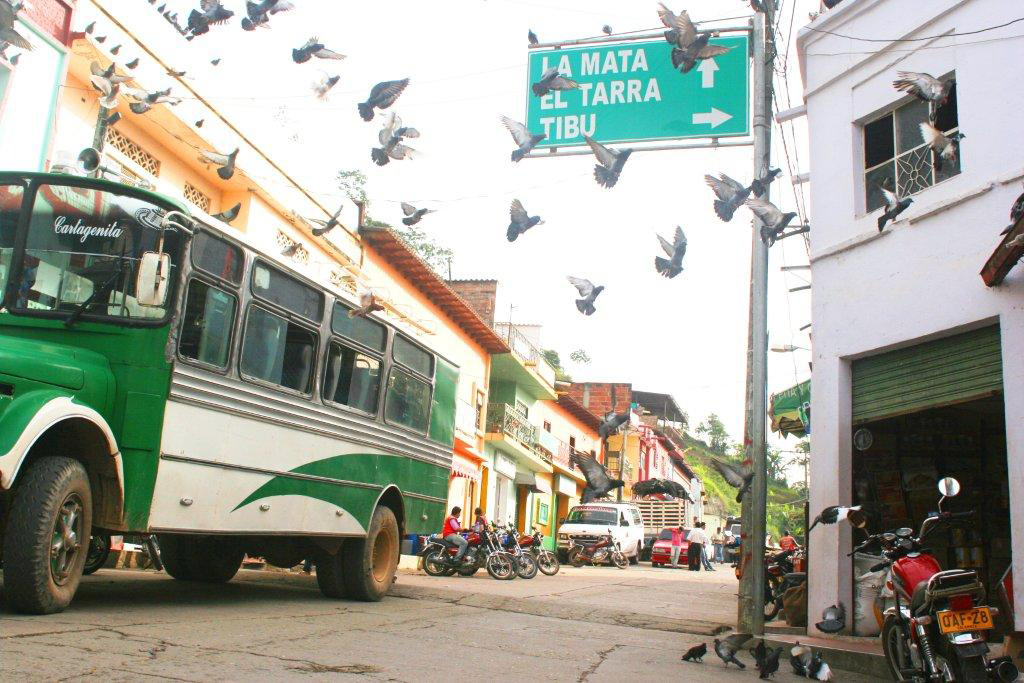 The Colombian government believes people should just say no to growing coca: those that don't, risk aerial spraying of their illicit crop with powerful pesticides, or manual destruction by private work teams supported by the security forces.

Is the strategy paying off in Colombia’s long war against drugs? On the face of it, yes. Coca cultivation fell by a quarter in 2012, according to a new crop monitoring survey released by the government and the UN Office on Drugs and Crime (UNODC) earlier this month. The area under coca dropped to 48,000 hectares, down from 64,000 in 2011. Out of 23 provinces growing the crop, only three showed an increase in yields.

The government is aiming to slash production still further in 2013 - down to 30,000 hectares: vindication of its prosecution of US-backed Plan Colombia which, 13-years on and approximately US$9 billion later, has succeeded in banishing the rump of the armed groups profiting from cocaine to the country’s remotest regions.

While analysts agree the coca crop has shrunk, there are caveats. Cocaine production and the price of cocaine base and paste has actually remained fairly stable, which could be due to new super strains that can produce more cocaine per ton of leaf. In response to the pressure on upstream production, Mexican cartel representatives are helping to reorganize the business in Colombia, part of a highly adaptable and mobile regional narco-trade.

Bo Mathiasen, UNODC’s representative in Colombia, acknowledged that “cultivation often resumes in new or previously cleared fields” unless sustained investment in alternative crop strategies are made. He also notes the armed groups – guerillas and former right-wing paramilitaries turned mafia - are increasingly moving into the more lucrative and less policed mineral mining business, which creates a new set of challenges for the government.

Plan Colombia - more of the same

And, as with every conflict, there is a humanitarian cost.

A key plank of Plan Colombia, and one of the most controversial aspects of the strategy, is aerial spraying of the herbicide Roundup, developed by Monsanto. The authorities argue that it is only used in hard-to-reach areas, and there is no evidence the glyphosate is harmful to humans - an issue of intense debate in Colombia.

While it might be difficult to prove harmful health effects beyond anecdotal evidence, according to a 2013 study there is a strong correlation between the less-than-accurate spraying and displacement: fumigation succeeds in driving both coca growers and legitimate farmers out of an area. Complaints by Venezuela and Ecuador of the herbicide drifting into their farmers’ fields led to a ban on spraying in the border regions.

“It does not eradicate, but diffuses coca production, shifting it to forests of ecological importance and to areas inhabited by low-income, especially Afro-Colombian and indigenous communities, which as a result are increasingly displaced,” the study found. The drug war has forced roughly five million people from their homes.

Manual eradication is seen as more effective than crop dusting. Teams of men on two-month contracts, protected by the police and sniffer dogs, yank out the patches of coca hidden in the folds of hills or forest clearings. Private firms recruit from among the rural poor, often the internally displaced, who may even have been coca growers themselves, earning a salary of $300.

Coca is a hardy crop able to grow on poor soils, delivering 3-6 yields a year. It takes roughly two years to mature. The lack of state support and poor market access make it particularly suited to Colombia’s remotest regions - land not claimed by the wealthy elite and export-focused plantation agriculture.

Coca’s checklist of advantages also include price stability and guaranteed demand; middle-men that come to the growers’ own doorstep to pick-up the produce; and it can be packed in sacks, thrown into the back of a truck and driven over unpaved rural roads. As Sanho Tree of the Institute for Policy Studies has been quoted as saying, “Peasants [who attempt to] drive to market with a load of tomatoes… end up with ketchup.”

The downside is that the farmers do not grow coca entirely of their free will. The armed groups impose production in the areas they run and drive out those that do not comply. It is a complex relationship between guerilla and peasant, both sons of the soil with a historical grievance against the state, but control is also enforced ruthlessly: “This business does not forgive sinners,” explained the mayor of El Tarra, Jota Mario Arenas.

“Everybody is aware of the impact of this business. There is huge tension and fear in the communities. But the difficulty is how to get out of it. We can’t do it by ourselves, we need help. But state policy says that you are doing something wrong and we can’t negotiate with you. It puts the community in a situation - the state sees them as criminals, but doesn’t give them alternatives for solving their problem.”

It is dangerous work. The armed groups controlling coca production mine and booby-trap the fields. Plastic explosives cannot be detected by the sniffer dogs, and eradication teams with a quota to fill can take risks. Lack of private health cover and the administrative nightmare of the public health and insurance system means it can take ages for those injured to receive any benefits, according to Mario Alberto Quinones of the Colombian Campaign Against Landmines.

“They accept the risks, but after accidents the companies fail to give them all their rights, and sometimes fire them,” he told IRIN. Poverty means that joining an eradication team “is not a real choice”.

Norte de Santander, bordering Venezuela, is one of the provinces that increased coca production in 2012. The Revolutionary Armed Forces of Colombia (FARC), the National Liberation Army (ELN) and the smaller Popular Liberation Army (EPL) dominate coca production here. In June farmers blockaded roads in the Catatumbo region to keep the eradicators out, and to demand peasant reserve zones, protected from land grabs and benefitting from credit and rural-development efforts.

The government is in peace talks with the FARC in Havana, after 50-years of conflict over land reform and social justice. It portrayed the protest as an effort by FARC to protect their narco-business - a charge rejected by farmers’ leaders.

There is anger in Catatumbo over the government’s eradication programme. In a meeting in the mayor’s office in the municipality of El Tarra, a group of men and women gathered to discuss the issue. They hesitated to criticize the guerillas, but there was frustration over the central government’s developmental neglect, the inevitability of the displacement that would follow coca destruction and the impact on people’s livelihoods.

One woman, who asked not to be named, said her small shop selling food and stationery was paying for the private education of her two daughters. If farmer incomes fell as a result of eradication, what would happen to her girls, she asked.

Farmers process coca into “base”, adding petrol, cement and fertilizer to vats of the raw leaves. The resultant brown pulp with a cocaine content of around 35 percent makes the farmer in Catatumbo around $1,300 per kilo, excluding the cost of the chemicals and labour. “It offers you more than growing licit crops, but not that much more,” explained Antonio da Silva of the UN Office for the Coordination of Humanitarian Affairs.

“The money is just to survive,” one woman at the meeting said. “I don’t see anyone living large here, I don’t know of anyone who has bought a car.”

She added that being at the end of a long and pot-holed road through the Andean mountains makes goods all the more expensive in El Tara. Blockades, or guerilla attacks on infrastructure, merely increase everyone’s hardship. “If an electricity pole is destroyed, we pay the price. All the burdens of the conflict are on the shoulders of the peasants.”

“Zero coca” means farmers must first uproot their crop, but then wait many months until they are certified coca-free and can get help and financial support to start new ventures. The group focus of the programme means that all families in a particular area must collectively renounce coca, trust the government will pay, absorb the financial pressure in the interim, and manage the resentment - or offers of aid - from the armed young men in the community.

“The people are caught between two forces - how do you cope? Sometimes you just displace yourself [and leave the land],” said Quinones.

The government gasses or smashes coca. But what incentive is there to prevent farmers returning to cultivation? The drawback to the government’s alternative crop policy, backed by USAID, is that it has been “guided more by security rather than development considerations”, according to analyst Ricardo Vargas of the Transnational Institute. The idea is to deprive the guerillas of financing rather than the sustainable development of the communities and the region.

According to the International Harm Reduction Association: “It is well recognized that for alternative development programs to succeed they need to be properly sequenced (alternatives must be in place before the illicit crops are removed); accompanied by investment in infrastructure; and supported by trade justice initiatives... Assistance for alternative development programs should also not be made conditional on illicit crop reductions.”

USAID’s crop substitution programme includes coffee and cocoa, both suffering at the moment due to a downturn in global demand. USAID has also pushed palm oil, now one of the fastest growing sectors of the Colombian economy. However, according to Flaviano Bianchini of the environmental NGO Source, the large palm plantations are linked to land evictions and are crowding-out small independent producers.

“You need to identify the production profile of a place, the agricultural traditions of the zone for there to be effective alternatives,” the mayor of El Tarra, Jota Mario Arenas, told IRIN. “The main thing is the municipalities should be part of the design, to advise. They are the link with the communities and understand them… Peasants need time and skills training and to be assured that, in the end, the policy works for them.”

The government is re-thinking its approach. In 2011 it introduced the national Plan for Territorial Consolidation (PTC), which built on an earlier initiative to tackle both violence and marginalization through a coordinated strategy. The US State Department has urged more funding to the PTC, which has been reduced in geographical reach, to “improve security, increase public service provision, build infrastructure, and generate additional economic opportunities in regions that have historically been heavily influenced by terrorist and criminal elements”.

The human rights NGO the Washington Office on Latin America (WOLA) is critical of the programme’s failure to achieve its ambitious goals in these ungoverned areas. “Soldiers are by far the most commonly seen government representatives, and the civilian parts of the government - such as health services, education, agriculture, road-builders, land-titlers, judges, and prosecutors - are lagging very far behind.”

“Consolidation”, according to WOLA, can be seen as the successor to Plan Colombia – but has been limited by administrative and financial problems. Success in breaking the cycle of violence is all the more urgent should the peace talks in Havana succeed and demobilized young men return to the neglected peripheries.

Colombian President Juan Manuel Santos is regarded as part of a group of Latin American leaders pushing for new thinking. “The time has come to discuss new approaches to dealing with the problems of drugs in the Americas,” Santos wrote in a comment to the UK’s Guardian newspaper. “After four decades of a hard-fought `war on drugs’ the situation remains - in spite of progress in some areas - terribly and frustratingly stuck.”