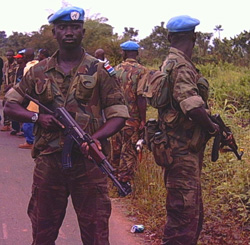 More than a year after the end of the conflict in neighbouring Côte d'Ivoire, the Liberian government has pledged to deal once and for all with longstanding complaints of its nationals being party to military operations and serious human rights violations on the other side of its western border.

By sending troops from the Armed Forces of Liberia (AFL) to Grand Gedeh County in eastern Liberia, helping to extradite alleged Ivorian militia fighters, temporarily closing the border, and pledging tighter surveillance of Ivoirian refugees as well as greater cross-border cooperation, the government of Liberian President Ellen Johnson-Sirleaf has sought to show it is serious about tackling a now acknowledged mercenary problem in Liberia’s territory.

Critics have accused the Liberian authorities of tailoring their security policy to the needs of Côte d'Ivoire, at the expense of needlessly opening old wounds from Liberia’s civil wars (1989-1996 and 1999-2003).

Thomas Nimely, former head of the Movement for Democracy in Liberia (MODEL), one of the main rebel movements in the war against former President Charles Taylor, and long-based in Grand Gedeh, told Voice of America that: "If Ivory Coast wants peace, they should look for their own peace", adding that Liberians in the border regions should not suffer as a result.

Accused by HRW of "having its head in the sand in responding to the flood of war criminals who crossed into the country at the end of the Ivorian crisis", the government suggested the report had seriously overstated the extent of Liberian involvement.

Linking with Abidjan on security

Senior Liberian officials joined their Ivorian counterparts, representatives of the UN Mission in Liberia (UNMIL) and the UN Operation in Côte d'Ivoire (ONUCI), for a meeting in the Ivoirian commercial capital, Abidjan on 13 June. It ended with a joint communiqué offering to stabilize territory on both sides of the border, improve information exchange; tighten extradition procedures and consult more with community leaders.

The following day Liberia’s Information Minister, Lewis Brown, invited 10 "persons of interest" to turn themselves in to the authorities, implying they had been involved in mercenary activities.

Liberia delivered on its pledge to hold an extradition hearing for 41 Ivorian nationals in Zwedru, the capital of Grand Gedeh, and ensured their passage into Côte d'Ivoire on 23 June. The Liberian government has also reportedly suspended alluvial gold mining in Grand Gedeh, in which former Liberian combatants from a variety of factions actively participate.

The mercenary issue has long been a source of embarrassment to the Liberian government. President Johnson-Sirleaf issued periodic warnings during the post-electoral crisis in Côte d'Ivoire that Liberians should not get involved.

Liberia has been praised for its efforts to deal with an influx of over 200,000 Ivoirian refugees, but has also faced accusations of negligence and incompetence for failing to stop a steady flow of battle-hardened fighters into Ivorian territory.

High-profile mass arrests have sometimes been followed by the discreet release of those taken into custody.

A border beyond control

Even with the presence and active support of UNMIL, the Liberian authorities have difficulty policing a porous 700km frontier with Côte d'Ivoire, much of which runs through dense forest. The thinly scattered checkpoints and border controls are outnumbered by dozens of informal crossings.

Relief agencies and refugees confirm that the strong affinity between host communities and incomers was crucial in helping Ivorian refugees settle, particularly in Nimba. But the Krahn-Guéré connection has featured prominently in reports of mercenary recruitment and the alliances between Ivorian forces still loyal to ousted president Laurent Gbagbo and Liberian fighters.

The UN Panel of Experts on Liberia believes at least 300 Liberians, mainly from Nimba, fought on the side of the Forces Républicaines de Côte d'Ivoire (FRCI), backing current Ivorian President Alassane Ouattara.

But many more, particularly Krahn, were allied to the Forces Armées Nationales de Côte d'Ivoire (FANCI), fighting for ex-president Laurent Gbagbo, and were particularly active in western Côte d'Ivoire, where pro-Gbagbo militias had longstanding ties with Liberian combatants.

In a report submitted to the UN Security Council in November 2011, the UN Panel of Experts on Liberia documented not only the direct involvement of Liberian fighters in some of the worst atrocities in the later stages of the Ivorian crisis, but also their predictably messy exodus from Ivorian territory in the wake of Gbagbo's overthrow. The report made clear the inability of a weakened Liberian judicial and security system to track, try and detain combatants.

HRW has welcomed Liberia's public commitment to resolving its mercenary problem. Matt Wells HRW's West Africa researcher, noted that: "the Liberian government has taken important steps, making it clear that those responsible for devastating attacks on Ivorian border residents and the deaths of peacekeepers will be held accountable". But they have caveats too about the role of the AFL, the revived national army, which has some experienced commanders, but inexpert personnel.

The Krahn are the dominant ethnic group in Grand Gedeh. Former President Samuel Doe was born in Tuzon, about 10km from Zwedru. During his 10 years in power (1980-1990), the Krahn held dominant positions in government and the Armed Forces of Liberia (AFL). Later, as the struggle to oust Charles Taylor intensified, the rebel Movement for Democracy in Liberia (MODEL) drew heavily on a Krahn support base in eastern Liberia, while also receiving support from Côte d'Ivoire.

MODEL is now defunct, but former senior commanders from its ranks were on the government's “wanted” list of 10 alleged mercenaries, including Isaac Sayou Chebgo (also known as 'Bob Marley'), Amos Cheyee, Bobby Sharpee and Nehzee Barway.

MODEL's former leader, Thomas Yaya Nimely, who served as foreign minister in the Transitional Government of Gyude Bryant in Liberia, warned against state harassment of former MODEL personnel, alleging that his own farm in Grand Gedeh has frequently been put under surveillance by security operatives. In a recent interview on the Voice of America (VOA) radio station, Nimely confirmed that the government had invited him to Monrovia, the Liberian capital, to talk about the situation in his home area in eastern Liberia, while hinting that the government's approach had been too heavy-handed.

Parliamentarians from Grand Gedeh have echoed Nimely’s criticisms, and have been rebuked in turn by national ministers and sections of the media, accused of raising ethnicity as an issue. But Alex Chersia Grant, who represents District Three of Grand Gedeh County, on the Ivorian border, said the government had blundered in issuing its “wanted” list. "Eight out of 10 names on that list are Grand Gedeans," Grant told IRIN. "I know some of them personally. One man who gave himself up has been around here in Monrovia, struggling to maintain his livelihood."

Grant said concrete evidence of Liberian involvement in recent violence in western Côte d'Ivoire, notably the killings near Tai, had yet to be provided. He stressed the complexities of the fall-out from the Ivorian conflict, the dangers of false information circulating, and the need for government leaders to do more consultation before springing into action. "This whole thing [cross-border militia action] requires proper investigation before action can be taken," Grant said.

The MP said he had fielded numerous phone calls from concerned constituents in Grand Gedeh, who were worried about the government troop deployment. While acknowledging that tensions appeared to have eased, Grant urged the Armed Forces of Liberia to tread carefully, hinting that a strong-armed deployment would antagonize a population with bad memories of past conflicts. "Some of our political leaders have short memories", Grant warned. "We should be careful how to respond to little things so they don't escalate into bigger things."

The same grievances have been taken up in the diaspora, notably by the Grand Gedeh Association in the Americas (GGAA). In a statement issued on 22 June they strongly questioned the government's “wanted” list of 10, saying, "We are troubled by the level of intimidation directed at peaceful citizens within Grand Gedeh County by overzealous Government security forces and functionaries, in the form and manner that are designed to install fear and apprehension among the population".

Among the concerns raised by Grant and others is Liberia aligning itself so clearly with Côte d'Ivoire’s president Ouattara when many in western Côte d'Ivoire, particularly in the Guéré community, have bitter memories of atrocities allegedly committed by the FRCI (Forces Républicains de Côte d'Ivoire) towards the end of the Ivorian conflict. Interviewed in the French weekly, L'Express, senior FRCI commander Losséni Fofana was quick to blame Liberians for the attack near Tai, adding that his soldiers should be given the right to cross into Liberia in pursuit operations, "but we are waiting for the politicians to decide".

Mats Utas, Associate Professor in Cultural Anthropology at the Nordic Africa Institute in Uppsala, Sweden, has researched command structures among Liberian former combatants and their role in the artisanal mining sector in Grand Gedeh. Writing weeks before the June attacks, Utas noted that the presence of training camps in Grand Gedeh was "highly unlikely", and that cross-border attacks, while part of the local reality, were "extremely rare and… appear in isolation".

In a phone interview with IRIN, Utas said it was important to differentiate between small-scale operations by Liberians and the more significant attacks inside Ivorian territory. He warned of the likelihood of tougher treatment of Ivorian refugees by the Liberian security forces, but also stressed the dangers of the military antagonizing sections of the Liberian population. "Grand Gedeans already have this sense of abandonment, of things being mishandled by Monrovia, and this is not going to help."