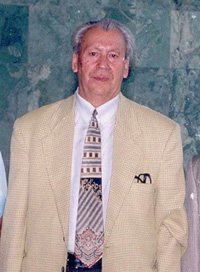 After the collapse of the Soviet Union in 1991, five newly independent states emerged in Central Asia. The presence of these states stimulated a separatist movement among the Uyghur minority in neighbouring China's Xinjiang Uighur Autonomous Region. Uyghurs are a Turkic, Sunni Muslim people, with close cultural and linguistic ties to other ethnic groups in Central Asia, including Kyrgyz, Kazakhs, Uzbeks and Turkmen.

Since 9/11, Chinese officials have portrayed Uyghur radicals in Xinjiang as separatists and terrorists with links to a range of extremist Islamic groups throughout Central Asia. In Bishkek, these charges have found a sympathetic ear. In 2000 and 1999, Kyrgyzstan struggled to contain armed incursions by militants affiliated with the Islamic Movement of Uzbekistan (IMU). Uyghur activists maintain that they are trying to preserve their cultural identity in the face of relentless assimilation pressure from Chinese authorities in Xinjiang.

Some 10 million Uyghurs live in China and roughly 50,000 Uyghurs are believed to be living in Kyrgyzstan, though unofficial estimates put the number at twice that amount.
Tursun Islam, head of 'Democracy' - a local rights group helping the Uyghur minority in Kyrgyzstan, told IRIN in an interview about his concern for Uyghur asylum seekers, who had been extradited by Kyrgyz security forces and sent back to China. Many have been accused of terrorist offences and executed.

QUESTION: When was your organisation established and what is its main area of activity?

ANSWER: We created the organisation in May 1998. Upon submitting all necessary documents to the Ministry of Justice we were registered as Democracy - a human rights organisation - on 4 April 1998. I have to mention that this organisation does not only comprise Uyghurs, we have Lithuanians, Russians, Kyrgyz and other members. The main priority is human rights advocacy by informing state agencies, NGOs and international organisations about human rights violations in the country.

Often people come to us and say police have harshly violated their rights, or complain about injustice from law-enforcement agencies. We provide legal advice to them and defend them in court.

Q: Are the human rights of Uyghurs in Kyrgyzstan respected?

A: Besides local Uyghurs in Kyrgyzstan there are Uyghurs from XUAR [China], usually traders, who come to Bishkek, or other parts of Kyrgyzstan to trade. Here in Bishkek, the majority of them work at the "Madina" trade centre. They have a lot of problems with the police because they are businessmen, so they come to our office and complain that police openly rob them. Many of them come and tell me exactly the same story that a police officer comes up to a person, asks to show his passport or other documents, then takes the passport and says:

"You've got problems with your passport. I have a right to deport you, but we can resolve this problem, if you pay me some money. Then I will let you go, if you do not agree I will take your passport, and then I will inform the Chinese embassy that you are a terrorist, or a separatist; then you will have more problems and will never come here."

Concerning the human rights situation of local Uyghurs in Kyrgyzstan, it is obvious that it is bad. Mass media publications, even the central TV channel, represents Uyghurs negatively. For example, recently police officers beat young Uyghur boys shouting: "You Uyghurs are terrorists, we will give you problems, we will oppress you". It is the result of continuously published articles, which insult Uyghur people. Last year, the deputy prime minister, Kurmanbek Osmonov, told the "Vecherniy Bishkek" newspaper that the biggest threat in the region was Uyghur separatists. Local Uyghurs are also afraid to talk openly about such problems, as they have already have difficulty to get a job and education. However, there is a paragraph in the Kyrgyz Constitution, which says that all people in Kyrgyzstan, including Uyghurs, are protected by law.

Q: What is your organisation doing to address these issues?

A: The problem is that we cannot do much because those who complain do not want to write official complaints, or to start legal proceedings because they are afraid of the consequences. They are afraid they may lose their jobs, or visas or they might face other problems. Therefore, we cannot do anything, we meet many government officials, but they ask for evidence, which is difficult to provide.

Q: You have been quoted as saying you are concerned about the deportation of Chinese Uyghurs back to China. What are these people doing in Kyrgyzstan?

A: Usually Chinese Uyghurs who come to Kyrgyzstan are seeking political asylum, but I don't know any case, in which such a person received asylum in Kyrgyzstan. On the contrary, Kyrgyzstan illegally extradites Uyghurs. Jalal Kasarji, a Uyghur who was imprisoned for "illegal storage of the weapons", got 14 years imprisonment, and later he got 10 years more (in total 24 years). Now China urgently demands his deportation, which is a real threat to his life. The government has already extradited Mamat Yasin, Mamat Sadyk, Jalil Turdi, and Bajvachcha. I know that these people were executed in China.

Q: What's the Kyrgyz government's reaction to your work?

A: Ministry of Internal Affairs officers came to the office of the Uyghur Society in Kyrgyzstan and asked about me, and we met with them there. They were very brutal and impolite. I have also been threatened on the phone several times. I had such calls in 2002 when I published my paper about human rights in XUAR in a local newspaper "Respublika". Recently somebody called me again and said that my life depended on my future activity. The last threat was more of an order - to halt the activities of the organisation.

Q: Why the official hostility?

A: It is because I speak the truth and say that there are human rights problems in Kyrgyzstan and that Kyrgyzstan doesn't act in accordance with international law by illegally extraditing Uyghurs. Moreover, I publish information about genocide by the Chinese government in XUAR. In all papers, petitions, appeals and articles I use only facts with names, dates of execution, the number of people executed, and the place where these people where executed. I work also with Amnesty international [AI], and we exchange information that we have.

Q: Why do you continue with this work?

A: The answer is if I were afraid of these things, I would not have worked, if someone is afraid he or she will not work, who will work then? Then Uyghurs will disappear. I say only facts, and I want to show only the truth about Uyghurs.