With one of the weakest health systems in the world and a government in turmoil, Somalia is struggling with a new wave of coronavirus infections that will likely lead to a surge in unrecorded and unrecognised deaths, health officials and aid workers warn.

Officially, there have been more than 14,000 confirmed cases and over 720 fatalities, but “this is the tip of the iceberg,” Mohamed Mohamud Ali Fuje, chief medical adviser to the government’s COVID-19 National Task Force, told The New Humanitarian.

Somalia has a poor testing rate. Just 156,000 tests have been performed in a country of more than 15 million people, so gauging the severity of the outbreak through official data is extremely unreliable, while information on any new variants is almost non-existent.

The lack of healthcare coverage and an absence of documentation means “the actual death toll is much higher than the figures reported,” said Fuje. Most sick people are cared for at home, and the dead are typically buried according to Islamic tradition within 24 hours.

Even if patients do make it to hospital, the lack of equipment – including oxygen – means “there's almost a zero chance of surviving if one develops COVID-19 complications," a UN health worker in the southwestern city of Kismayo – who asked not to be named as they weren’t authorised to speak to the media – told The New Humanitarian.

Somalia received 300,000 doses of the Oxford-AstraZeneca vaccine in March and has reportedly inoculated close to 120,000 people with the first jab of a two-shot rollout. But the vaccines delivered so far cover under 0.5 percent of the population.

That means the wearing of masks and social distancing remain vital, but such measures are only being very loosely adhered to. “Nobody wears a mask, let alone socially distance,” said Mogadishu-based freelance journalist and filmmaker Abdirahman Ahmed Aden. “They don’t take COVID seriously; they don’t see it as a risk.”

In the first COVID-19 wave, from April to June last year, healthcare and funeral workers reported anecdotal evidence of an unprecedented spike in fatalities, especially in the capital, Mogadishu: The number of graves dug in the city jumped by at least fourfold.

The second wave, beginning in February this year, has been even more severe. According to the official data, more people have died in the past three months than during the entire March to December period in 2020.

“In this second wave, I estimate Kismayo [alone] lost around 300 people between March and mid-April,” the UN health worker said. “Gravediggers in Kismayo were overwhelmed – so much so that [bulldozers] were being used to dig graves."

The surge in COVID-19 cases comes as the country is in political gridlock, grappling with an electoral impasse. Delayed elections cannot happen because of a bitter stand-off between President Mohamed Abdullahi “Farmajo'' and the opposition on how to hold the polls. Armed groups loyal to opposition leaders occupy parts of Mogadishu.

“People are much more concerned by the political crisis in the country than COVID,” Aden told The New Humanitarian.

Somalia has struggled with three decades of armed conflict, recurring climate shocks, and – as a result – ever-deepening levels of poverty and vulnerability.

When the pandemic hit last year, the country was already grappling with floods that had forced more than half a million people from their homes, plus the largest locust invasion for a quarter of a century that threatened the coming harvest and pasture land. 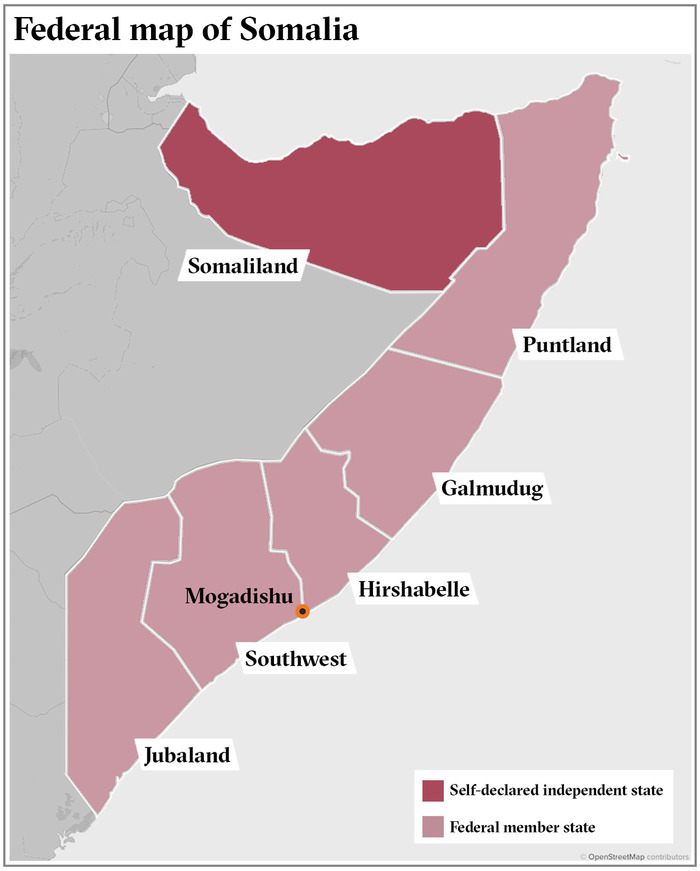 It now faces a drought emergency, with a second consecutive season of failed rains predicted. “The unprecedented impact of the COVID-19 pandemic, and already dire humanitarian situation in the country, [means] many lives are at stake,” humanitarian affairs minister Khadija Diriye said in a press release at the end of April.

Humanitarian action – from responding to the six million people currently in need of assistance, to mounting a coordinated COVID-19 response – is complicated by the country’s fragility and limited administrative capacity.

The internationally recognised federal government in Mogadishu is weak and its authority and edicts barely reach beyond the capital.

There are five semi-autonomous federal member states, whose relationships with Mogadishu range from ambivalent to bad. Somaliland in the northwest has declared its unilateral independence, while the violent jihadist group al-Shabab controls most of the rural hinterland, several towns, and major supply routes in the south and the centre of the country.

Al-Shabab initially ridiculed the COVID-19 threat, but has since done a U-turn and accepted the danger. It has, however, refused access to health teams to territory it controls and has urged people to reject the AstraZeneca vaccine as dangerous.

The risks of such a policy extend beyond Somalia. A large untreated reservoir of COVID-19, where variants could potentially mutate, would be not only a regional threat but possibly a global one as well.

“Even the states deemed friendly to Mogadishu did not coordinate smoothly with the federal government,” Zakaria Yusuf, Somalia analyst for the International Crisis Group, told The New Humanitarian. At both federal and state level, "the capacity of government institutions… is weak”, he added.

As with all humanitarian crises in Somalia, the COVID-19 response has largely fallen to the international aid community, which is bunkered in the heavily guarded “green zone” around the airport. Grounded by insecurity and the risk of spreading the virus, aid agency staff provide planning, logistics, and expertise, but are reliant on national civil society partners to do much of the work outside.

UN agencies have provided funding and assisted the federal government and regional authorities to procure diagnostic kits and other medical supplies, which are transported around the country on humanitarian flights.

Three molecular COVID-19 testing labs have been established by the World Health Organization in Mogadishu, Garowe, and Hargeisa. The WHO also covers the operational costs, as well as providing salary support to 11 technicians. There is also one private lab in Mogadishu.

Aware of the almost non-existent testing and tracing capacity, the initial response to the first wave of the pandemic by the federal government and some states was a lockdown. International and domestic flights were prohibited, schools and universities were shut, and dusk-to-dawn curfews imposed – measures that punished everyone, from the urban poor to business owners.

This time around, the authorities have been more lax, and markets, mosques, and even football stadiums have remained open. Aside from the public health messages carried by the public media – or daubed on walls – life has continued relatively normally. 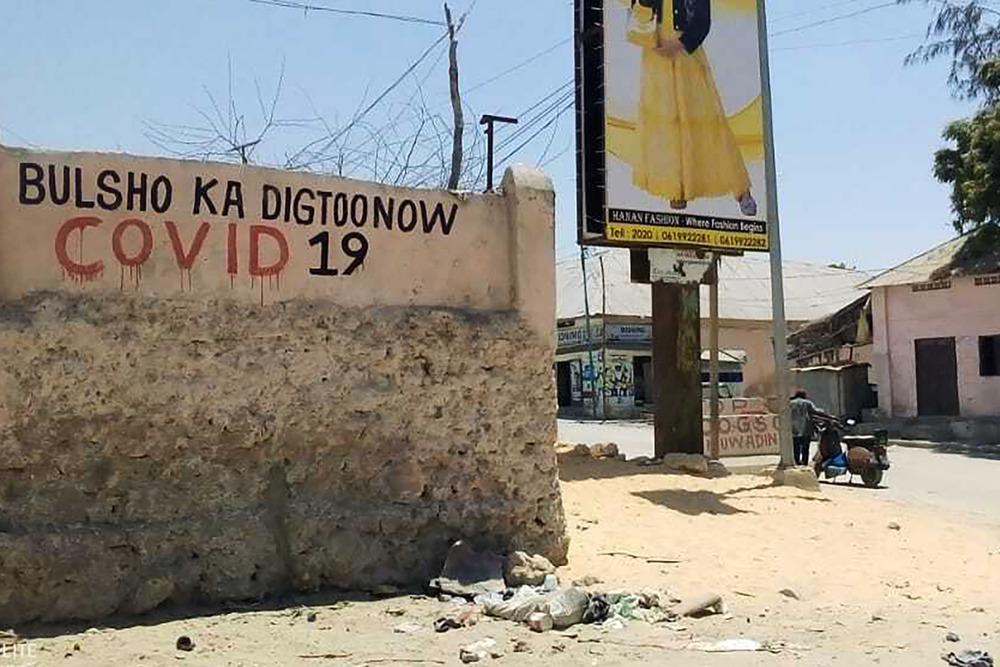 Abdirahman Ahmed Aden/TNH
“Beware COVID-19” – graffiti in the Ceelgaab district of Mogadishu. The government has mounted public information campaigns warning of the threat of the virus, on the radio and in print.

“People wouldn’t obey the rules anymore anyway,” said Aden, the filmmaker. “At the beginning of the year, when the government said it would fine people that didn’t wear face masks, people would pull up their masks when they saw police. Now, no one bothers.”

A new lockdown in Mogadishu would be unpopular, reflecting badly on a government struggling for political support. Most people depend on a daily wage, with no welfare safety nets to fall back on.

In Mogadishu alone, more than 800,000 displaced people live in over 700 overcrowded camps and unofficial sites scattered across the city. These long-term refugees from the countryside, escaping drought and conflict, are largely unassisted and lack even basic services – including water, key to the most rudimentary COVID-19 protection measures.

“At the beginning of the year, when the government said it would fine people that didn’t wear face masks, people would pull up their masks when they saw police. Now, no one bothers.”

While the health risks of the virus aren’t immediately apparent to a lot of people, the economic effects of the pandemic have been keenly felt. The World Bank projected that COVID-19 would cut growth by 2.5 percent last year, after earlier forecasting the economy would grow by 3.2 percent.

Somalia is estimated to receive approximately $1.3 billion to $2 billion per year in remittances from its large diaspora community. The transfers are normally a lifeline for close to 30 percent of the population. But remittances fell sharply in 2020 and could decrease again this year if the global economic recovery is not as robust as hoped.

Weak and dependent, the Somali government seems to have few resources other than persuasion to battle the virus.

“From the beginning, we understood the limited capacity of our Somalia institutions,” said Fuje, the chief medical adviser. As a result, “we decided to focus on awareness campaigns to sensitise the people and limit spread.”

But these efforts don’t appear to be working, and the lesson being learnt around the world at the moment – from Brazil to India to Turkey – is that if you don’t do enough to contain a virus that can mutate so rapidly, new waves are often worse than previous peaks.