Editor’s note: Idayat Hassan is an authority on violent conflict in Nigeria and has been researching banditry and pathways to peace since 2018.

Beyond the bang-bang: Reporting from the front lines of peace. This article is part of our peacebuilding coverage, reporting on how atrocities can be prevented, how societies can be made more resilient, and how peace can be sustainably built.
GUSAU, Nigeria

They are known simply as “bandits” – heavily armed criminal gangs that have terrorised Nigeria’s rural northwest, killing, kidnapping, forcing people from their homes, and taunting the authorities with their brazenness.

The violence typically involves scores of gunmen on motorbikes sweeping into villages, shooting all the young men they can find on the assumption they belong to local vigilantes, and then carting away livestock and anything else of value.

The raids are increasingly daring. In the last few months, bandits have downed an air force jet; attacked the military’s officer training school; struck a prestige commuter rail service running between the capital, Abuja, and the city of Kaduna; and kidnapped students for ransom from schools and colleges so many times that education is now in peril. 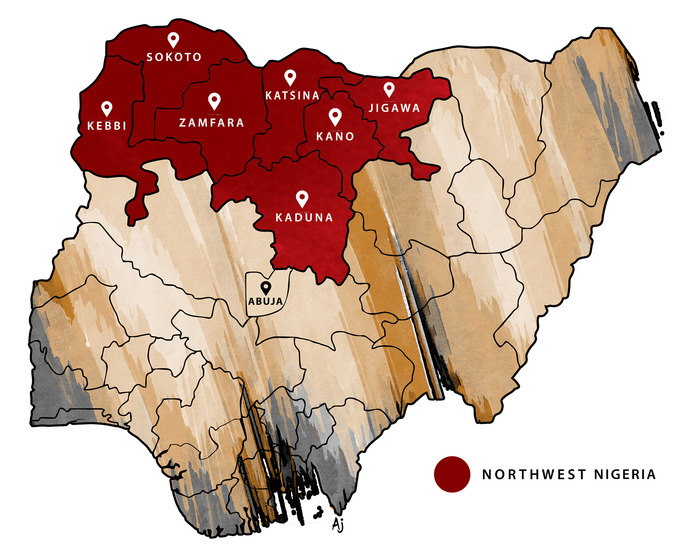 And although bandits aren’t natural ideological bedfellows for jihadist movements, there’s also a persistent fear that al-Qaeda-linked Ansaru and Islamic State in West Africa Province (ISWAP) – the country’s largest extremist group after splitting from Boko Haram – are recruiting among them to expand their influence across the entire north.

Zamfara, one of Nigeria’s poorest states, is at the centre of the banditry. It tops the country’s league table of violent deaths, with 495 reported killings between July and October. That’s far more fatalities than northeastern Borno – where ISWAP and Boko Haram operate.

The insecurity has triggered a food emergency across the northwest, with over 450,000 people fleeing farms and rural markets. The US government’s Famine Early Warning Systems Network, known as FEWS NET, has predicted “catastrophe” levels of hunger in parts of the region – which means famine for some households.

The following outlines what’s gone wrong in the ongoing attempts to resolve the expanding crisis, and offers some recommendations on a way forward.

Roughly 10 military operations have been launched against banditry in the northwest so far, but they have failed to make a dent in the insecurity. The mobile gangs take advantage of a forested, sparsely populated region, and when attacked, simply move elsewhere.

The security stick doesn’t address the root causes of the violence. Land disputes are a key issue: Expanding farms have encroached on the routes and cattle reserves used by pastoralists, resulting in friction – on both sides – when fields are trampled. Local authorities are seen to have failed to fairly adjudicate these conflicts.

Nigeria is also under-policed, so farmers turned to vigilantes – known as Yan Sakai – for protection. But the Yan Sakai have been indiscriminate in their retaliatory violence. Although the bandits do recruit from among pastoralists, the vigilantes' response has been to target all herder communities, regardless of culpability.

The pastoralists have responded with their own, forest-based – and better-armed – self-defence groups, which over time have become almost indistinguishable from the original bandits.

What’s to be done?

To try and stem the spreading chaos, some state governments have turned to peace deals to essentially buy off the gunmen. The model is the oil-rich Niger Delta from a decade ago, where militants protesting the government’s exploitation of the area accepted amnesty deals and development programmes to end attacks on oil facilities.

But that approach has had mixed results in the lawless northwest. Zamfara introduced an amnesty and a cash for guns scheme in 2016. Initially, it seemed to work, but it fell apart two years later with the death of warlord Buharin Daji, the lynchpin of the deal. 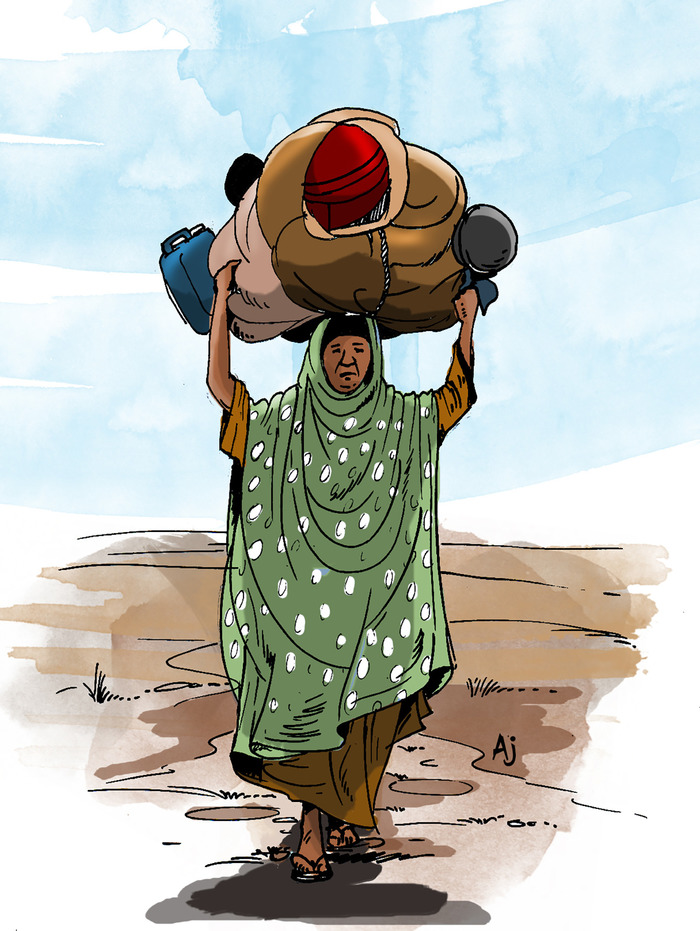 Akila Jibrin/TNH
The violence has forced more than 450,000 people from their homes in five states – Kaduna, Kano, Katsina, Sokoto, and Zamfara.

Zamfara tried again in 2020. This time, the new governor, Bello Matawalle, offered cows in return for guns (to avoid monetising the violence). He also ordered the disarmament of the Yan Sakai, and pledged to construct Rural Grazing Areas – settlements with dams and veterinary services set aside for pastoralists. But the attacks continued, and Matawalle made a U-turn in September, cancelling further dialogue.

A new military offensive was launched in Zamfara in September, combined with a telecommunications blackout, and bans on the sale of fuel in jerry cans to try to blunt the bandits' mobility. But the measures have simply pushed the bandits into neighbouring states.

It has been the same story in Katsina, the home state of President Muhammadu Buhari, with peace deals never properly sticking. Yet pastoralists in both Zamfara and Katsina also point out that governments have failed to deliver on the development promises they made.

Some states, led by Kaduna and Niger, have taken a far harder line by refusing to negotiate over ransom demands or amnesties. But they have not fared any better, with a string of high-profile student abductions that has forced the closure of schools.

Private mediation has also been tried. The most prominent was by Sheikh Ahmad Gumi, the leader of the influential Izala Islamic sect. He held a series of forest meetings with bandits, arguing that their grievances should be taken seriously and would need the kind of political and financial investment that ended the Delta crisis.

There’s a tendency to see the bandits as an undifferentiated group of ruthless, criminally minded men, ready to welch on any deal as soon as it’s in their interests to do so. In much of Nigeria, they are referred to as “terrorists” – which clouds conciliation attempts.

Both Matawalle, the Zamfara governor, and Gumi, the cleric, have argued that among the bandits are the self-defence groups that took up arms to defend pastoralist communities against the Yan Sakai – and to protest government neglect – and these are the men the amnesties and promises of development spending aim to reach.

But regardless of government intentions, the problem is that the peace accords negotiated so far are badly flawed and amateurishly executed.

These are some of the key issues getting in the way of workable deals:

Nothing in writing: There are usually no documents that outline terms and conditions, and no legal framework to guide implementation. That’s why, one bandit leader told The New Humanitarian, he considers them a “deal”, not an “agreement”: They are essentially transient and non-binding.

Lack of consultation: The peace deals are further weakened by the lack of involvement of farming communities. As a result, the farmers believe the interests of the aggressors are prioritised over the rights of the victims. The Yan Sakai – who farmers see as vital community defenders – complain that they hear about peace deals over the radio, just like everybody else.

Bandit proliferation: It’s estimated that there are at least 80 major gangs operating in the northwest. No chain of command unites them, and they act in their own individual interests. This means a complicated series of negotiations are needed to bring them all on board – if that’s even possible. 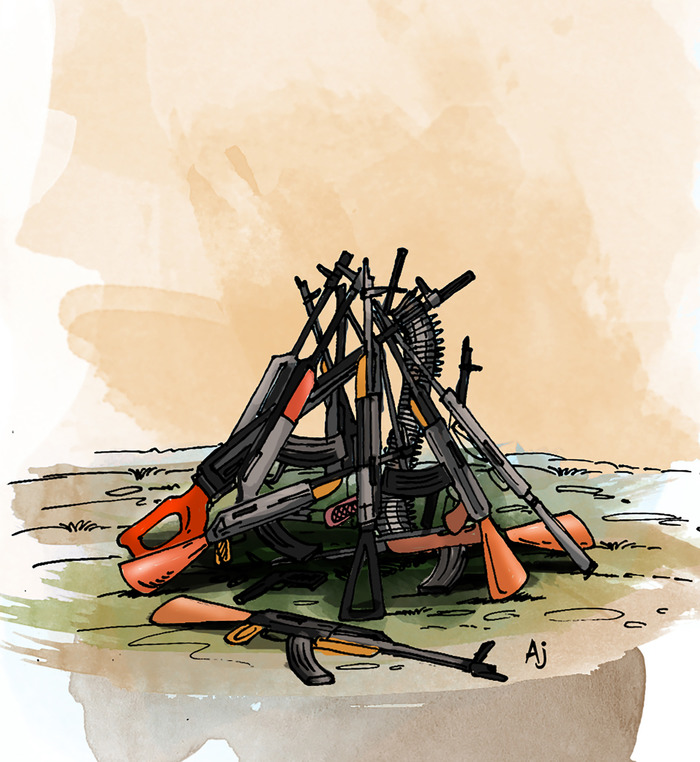 Akila Jibrin/TNH
Weapons are readily available in the northwest, flowing in from the jihadst conflict in the Sahel, or manufactured by local gunsmiths.

Hungry lieutenants: Negotiations are also complicated by the power dynamics within each gang. Deals are made with leaders, who have grown rich from banditry. They then need to sell the accord to their men, some of whom may not yet be ready to retire from a life of relatively easy money. Some deals have failed due to the overestimation of a warlord’s influence.

Guns galore: Media-friendly disarmament ceremonies don’t tell the full story. There are a lot of weapons in circulation, and it’s the village-based Yan Sakai that are at a disadvantage when it comes to surrendering them. The more mobile bandits can cache their weapons out of sight in the forests. And even though they are known to possess RPGs and anti-aircraft guns, those are usually not handed in – a lack of monitoring means they are likely to stay hidden.

No DDR: The lack of a formal disarmament, demobilisation, and rehabilitation (DRR) programme to support the reintegration of repentant bandits is also a challenge. Its absence compromises empowerment and psycho-social support programmes – which can leave surrendered bandits stranded and frustrated, vulnerable to re-recruitment.

Left and right hand: The lack of policy cohesion between the federal and state governments adds to the challenges of making peace. For instance, at the same time that Zamfara was offering an amnesty in 2018, the army was on an offensive, undermining the process.

The failure of the formally negotiated deals has seen the rise of hyper-local agreements between individual communities and the gangs, with villagers paying a tax in return for peace. In some areas, bandits now act as the law, settling local disputes and dispensing “justice”.

Here are some suggestions to deliver better results:

Smarter warfare: Nigeria must adopt a whole-of-government approach, with an emphasis on a military strategy that is holistic rather than piecemeal. In the immediate term, to establish peace, the government must first gain legitimacy by protecting the people.

Coordination: Peace deals alone are not a silver bullet in the fight against banditry: But they can be managed far better than the current ad hoc approaches: They need to be part of a “joined up” strategy that involves states and the federal government.

Incentives: A formal DDR programme needs to accompany any peace arrangement, similar to what is being implemented for surrendering jihadist fighters in the country’s northeast. Many of the bandits are young pastoralists without formal education. To leave the bush, they will need incentives, in the form of training and support.

No impunity: DDR should target the low-ranking footsoldiers – but the warlords must be held accountable for their actions. Given the sclerotic and frequently corrupt formal justice system, Nigeria should consider establishing special courts to try them.

Reparations: The success of any peace deal will depend on how the victims of the banditry are treated – including compensation for losses incurred during the conflict. For peace to be seen to be just, it needs to include reparations.

The government has drafted a National Livestock Transformation Plan that aims to curb the movement of cattle by encouraging pastoralists to switch to sedentary livestock production – more mechanisation and less transhumance. It’s a good start, but it is yet to be implemented – and faces financial, technical, and political challenges.

As this list of suggestions shows, for there to be any hope of ending the banditry in the long run, Nigeria must address the root causes of the conflict, and that requires far-reaching reforms in governance, and real accountability for all those associated with the insecurity.