Ethiopia’s transition to multi-party democracy has been in peril for months, but the eruption of conflict in the northern region of Tigray threatens a humanitarian disaster that could derail the process altogether and sow instability across the Horn of Africa.

Mass casualties have been reported in different parts of Tigray, while thousands of Ethiopians have fled to neighbouring Sudan since Prime Minister Abiy Ahmed ordered a military intervention last week against the region’s powerful ruling party, the Tigray People’s Liberation Front (TPLF).

Kiros Woldemariam, a 54-year-old from a town in southern Tigray told The New Humanitarian he was travelling to a neighbouring region when military jets began pounding the area, forcing him to take cover.

With telephone and internet services cut, Woldemariam said he had not been able to contact his wife and children, in another part of Tigray, for days. “I do not know if they are alive as there is no communication,” he said.

Aid operations in Tigray, which hosts around 200,000 internally displaced people and refugees from neighbouring Eritrea, have been severely curtailed, according to the UN’s aid coordination body, OCHA.

The agency estimates that nine million people living in and around the region are at “high risk” from the conflict, though a full picture of humanitarian needs remains hard to establish because of difficulties gathering information and accessing the area.

Abiy said the military intervention was launched on 4 November after the TPLF’s regional security forces attacked a federal army base, but TPLF officials denied involvement in the attack.

Tensions between the TPLF and the federal government have been escalating since September, when Addis Ababa indefinitely postponed regional and national elections on account of the coronavirus pandemic. TPLF officials opposed the decision and organised their own elections.

An ethnic Tigrayan party, the TPLF was the dominant force in Ethiopian politics until Abiy took office in 2018. Its members have since lost positions within the central government, and several officials have been arrested for corruption and human rights abuses.

On Monday, Abiy said the Tigray operations would “wrap up soon”. But analysts fear an all-out civil war that could trigger broader unrest within Ethiopia, where different regions are agitating for more self-rule or threatening to break away altogether.

Neighbouring states could also be drawn into the conflict, particularly Sudan, which is experiencing its own fraught political transition, and Eritrea, which sits across the border from Tigray and has a long-standing enmity with the TPLF.

“This is a pointless and avoidable civil war that is likely to morph into [a]... geopolitical nightmare in the Horn of Africa, potentially leading to the disintegration of the Ethiopian state into multiple feuding republics,” said Awol Allo, a senior lecturer in law at Keele University in the UK, and a vocal critic of Abiy.

Since fighting broke out almost a week ago, hundreds of combatants from both sides are thought to have died in air raids and clashes, though details remain scant.

The government said it had captured towns in western Tigray, where most of the fighting has been clustered, while its fighter jets have destroyed missiles and other heavy weapons belonging to regional security forces.

TPLF officials claim to have shot down an Ethiopian army warplane and taken control of the Northern Command, which is one of four regional military centres in the country and has a high number of Tigrayan officers. 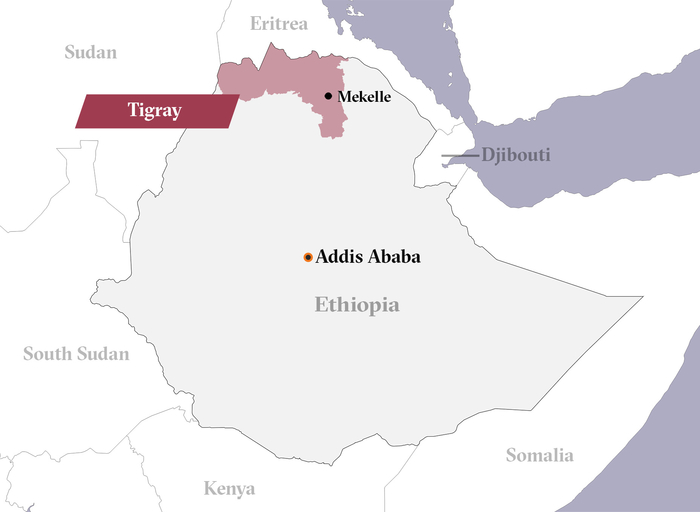 Khalid Alsir, a humanitarian official in Sudan’s eastern state of Kassala, which borders Ethiopia, told TNH that 2,700 refugees had entered the country since Monday and thousands more were waiting to cross.

Alsir said local authorities are transporting refugees from border towns to camps and providing them with shelter, water, and food. Some refugees had walked for four days to reach the border and shared “horrible stories”, he added.

The official called for international organisations to step up assistance. "The capability of Sudan is very limited and the number of refugees is very big,” Alsir said. “[We] will not be able to cover the influx of refugees in the coming days”.

A situation report from OCHA warned that the conflict could cause “massive displacements” in Tigray, a region where more than two million people are already in need of humanitarian assistance. It stated that restrictions on air and road travel were significantly affecting humanitarian operations, while the UN’s refugee agency, UNHCR, said it was struggling to provide support to refugees in camps in the region.

Efforts to combat an invasion of desert locusts have also been scaled back in Tigray – which is among the country’s regions most affected by the pest – just as new swarms are expected to arrive in the coming weeks.

Six percent of Ethiopia's more than 100 million population live in Tigray, but local officials have dominated the country politically since the TPLF led a guerrilla struggle that defeated the country’s Marxist junta, known as the Derg, in 1991.

In power, the TPLF introduced a new constitution that saw Ethiopia divided into nine ethnically based regions – each with their own security forces, parliaments, and the right to secede.

The party was the driving force within the *Ethiopian People's Revolutionary Democratic Front (EPRDF), a coalition of ethnic parties that was controlled by the TPLF and ruled with an iron fist for almost 30 years.

The removal of Tigrayan officials after Abiy – an ethnic Oromo – came to power on the back of mass protests against the EPRDF, fuelled a sense of ethnic discrimination among party members.

Then, last November, Abiy dissolved the EPRDF, creating a “pan-Ethiopian” national party, known as the Prosperity Party, which opposition groups considered an attempt to centralise state power and deconstruct the federal system. The TPLF refused to join.

“The current war with TPLF is not like any other fight,” explained Woldegiorgis G. Hiwot, a political analyst based in Addis Ababa. “It is also a battle between federalists and unionist forces, with both trying to control Ethiopia’s modern politics.” 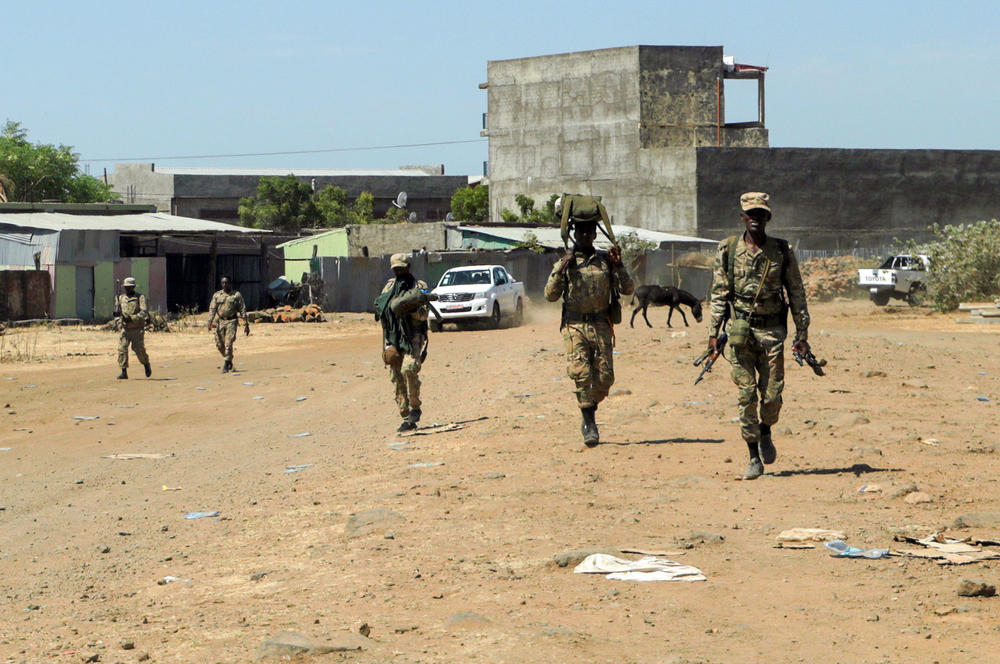 Tiksa Negeri/REUTERS
Militia fighters return to their base following clashes with the Tigray People's Liberation Front in northern Ethiopia. Analysts fear a sustained conflict in the region could spread to other parts of the country and draw in neighbouring states.

Tensions rose as Abiy’s government claimed the TPLF – which is not supported uniformly by all Tigrayans – was funding rebel groups and instigating ethnic violence around the country as part of a plan to derail the transition.

And since the TPLF won regional elections in September, both sides have described each other as illegitimate, while the finance ministry in Addis Ababa has frozen money to Mekelle, Tigray’s capital – a move TPLF leaders considered a “declaration of war”.

Both sides of the conflict are heavily armed. The national army has redeployed troops to Tigray from across Ethiopia amid concerns about the loyalty of the Northern Command, which constitutes a large proportion of the country’s overall number of troops.

Tigray’s regional forces and local militias are thought to number up to 250,000 between them – many of them experienced veterans from past conflicts against the Derg and Eritrea.

Analysts fear sustained conflict could spread to other regions of Ethiopia such as Amhara, which has a longstanding claim to territories in western Tigray, and whose regional forces and militias are supporting the federal government’s offensive.

If the Ethiopian government and army is weakened by the TPLF, opposition groups in other regions could also be emboldened. The risk is particularly high in Abiy’s home region of Oromia, where separatist rebels are fighting for independence.

A full-scale civil war could draw in Eritrea, whose president, Isaias Afwerki, has grown increasingly close to Addis Ababa since the two sides agreed to an historic rapprochement in 2018 that won Abiy the Nobel Peace Prize.

Tensions between Asmara and the TPLF stretch back to 1998, when the Tigrayan party led Ethiopia into war with Eritrea over a disputed border area. Tens of thousands died in the violence.

Debretsion Gebremichael, the president of Tigray, said on Tuesday that Eritrea had already begun sending troops over the border, though Asmara denied the claim.

Eastern parts of Sudan, which border Tigray, could see tensions between pro-Eritrean Sudanese groups and those with tighter relations with Tigray, according to the International Crisis Group.

Another concern is that the Ethiopian soldiers who constitute a large part of the African Union regional peacekeeping mission fighting al-Shabab jihadists in Somalia could be distracted by the war effort back home.

In an interview with TNH, Ethiopian analyst Mehari Tadele called for an immediate cessation of hostilities and a national dialogue. “To reject dialogue is to endorse endless war as a solution to a political problem,” Tadele said.

The African Union also called for a ceasefire on Tuesday, though few analysts are expecting an imminent negotiated solution to the crisis, given Addis Ababa’s determination to remove the TPLF leadership.

Woldemariam, the 54-year-old from Tigray, said the conflict was stirring up bad memories in his head of Ethiopia’s past wars: “I feel like I am reliving my own youth... and seeing it passed on to the next generation.”

(Additional reporting from Mohammed Amin in Khartoum, and from Philip Kleinfeld in Bamako.)

*(An earlier version of this story incorrectly stated that the EPRDF was founded after the constitution, when in fact it predated it. This version was updated on 11 November).