The scene is now common throughout eastern and southern Africa, as droughts for three consecutive years have decimated crops and caused widespread hunger. New research indicates that it is partly due to climate change driven by human action, which has worsened the El Niño weather phenomenon.

“This is about as bad as it has ever been,” said Chris Harvey, as he walked to his farm´s irrigation dam, where the water level has fallen six metres in 10 months.

“We might not be able to grow any vegetables next year,” his wife Sue added.

Dams in the area are drying out, symptomatic of the continent´s battle with years of poor rainfall. The droughts in eastern and southern Africa beginning in 2015 have affected tens of millions of people. The latest numbers from the UN suggest that 24 million people are facing food insecurity in eastern Africa alone, not counting millions of people in the southern region.

According to a new study published by the American Meteorological Society, such conditions will become increasingly normal as climate change takes its toll.

In South Africa, dams are down to 37 percent capacity, according to the government. Farmers say that actually means 27 percent in practical terms.

“The last 10 percent are unusable,” said Harvey. “It´s been lying too long on the bottom.”

Researchers associated with the United States Geological Survey found that man-made climate change contributed to the 2015/2016 droughts  and most likely to the reduced “short rains”, a second rainy season that usually occurs at this time of year in southern Africa.

The phenomenon occurs naturally every several years as a patch of warm water appears in the Pacific Ocean, which can lead to weather fluctuations including unseasonably dry periods. It is often followed by La Niña, which is associated with below average ocean temperatures and can lead to weather impacts that are opposite to El Niño.

Lead researcher Chris Funk, a professor at University of Santa Barbara, described in an interview how the oceans warm due to climate change, and very warm surface temperatures develop in pockets of the sea. These warm patches often increase the impact of natural climate variations that accompany El Niño, which can intensify droughts in food insecure areas.

For Africa, increases of about 0.9 degrees in both sea temperatures in the eastern equatorial Pacific Ocean and air temperatures in eastern and southern Africa have meant reduced rainfall.

“Our research shows that man-made climate change is making the impacts of both El Niño and La Niña climate variations stronger in Africa – meaning what we´ve seen in the last 18 months,” said Funk.

Although climate change alone did not cause the drought, it certainly made it stronger, according to Funk.

The study has yet to be reviewed by the UN’s Intergovernmental Panel on Climate Change, which is the leading expert body on climate change and does not comment on research until it is reviewed.

Richard Washington, a climate science professor at Oxford University, said he agreed with the findings overall, although he cautioned that they were based on “linear” research. “One limitation is for example: how does the Indian Ocean influence climate El Niño?” 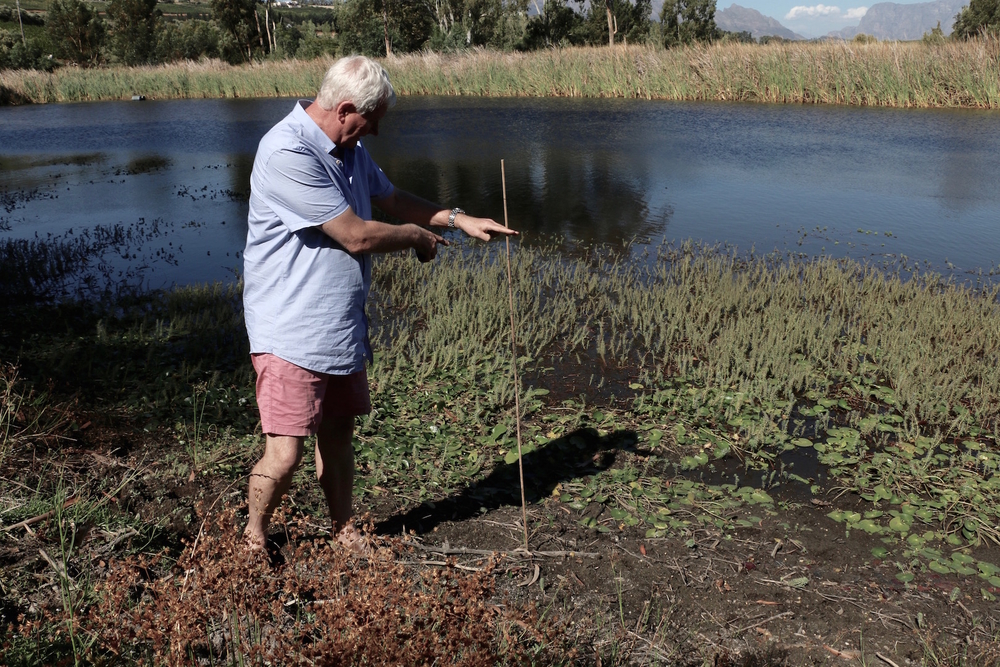 Peter Lykke Lind/IRIN
Chris Harvey says the river came up to the top of the stick only 10 months ago. His irrigation dam now sits six metres below normal level.

The UN has labelled it “the worst drought in 35 years” in southern Africa. . Almost 580,000 children are in need of treatment for severe acute malnutrition, and more than three million children have reduced access to safe drinking water.

“We estimate that more than 40 million people will be affected by food insecurity until March,” said Phiri, the UN food and agriculture coordinator. “Crops from last year are gone, and no new crops are ready.”

The UN is targeting 13.8 million people in southern Africa alone for humanitarian assistance during the peak of the lean season, which lasts until April. The worst-hit countries – Lesotho, Madagascar, Malawi, Mozambique, Swaziland, Zambia and Zimbabwe – are being specifically targeted by the World Food Programme.

David Orr, a spokesman for the WFP in southern Africa, sees positive short-term signs, as rainfalls have started again. But he still expects more frequent and more intense extreme weather events in the near future. Those include “drought and flooding as a result of upsets in the global weather system”, he said.

The situation on Harvey’s farm indicates the extent of the crisis.

“We have got 10 weeks, then we run out of water,” said Harvey. “Hopefully it will rain in at Easter, but if it does not, then we have a serious problem. There will not be enough water for the crops.”

As he walked up the dry bank of his shrinking dam, looking hopefully at the cloudless sky, he emphasised how this not only concerns the individual farmer: “What is on the line here, are thousands and thousands of jobs. It is a lot of people´s livelihoods we are talking about here, not just a few people and their crops.”