The compound of the Jesuit Refugee Service in the Ethiopian capital, Addis Ababa, is a microcosm of the region’s troubles.

Set off a busy main road, it hosts refugees from the conflicts and struggles in South Sudan, Congo, Uganda, Somalia, Eritrea, Yemen, Burundi, and more besides.

Ethiopia has a refugee population of 700,000, the largest in Africa. In the first few weeks of October alone, an additional 31,000 people fleeing the crisis in South Sudan arrived in the west of the country.

But Ethiopia is not only an important destination for refugees, it’s also a key country of origin and transit for migrants and asylum seekers as well.

The economy struggles to provide opportunities for its youth, who are increasingly heading to the Middle East via Yemen, or travelling south to South Africa looking for work.

The tight local job market means that although refugees are provided with sanctuary, they have no employment rights.

A $500 million initiative by the UK government, the European Union, and the World Bank aims to provide some of the answers.

The Partnership Framework initiative plans to build two industrial parks in Ethiopia to generate about 100,000 jobs, with Ethiopia required to grant work to 30,000 refugees as part of the deal. By investing in tackling the root causes, it aims to help put a lid on irregular migration.

Europe tries to buy its way out of the migration crisis

“Our investment is not going to solve the problem, but it may have a domino effect by showing others that this can work,” Francisco Carreras, head of cooperation at the Delegation of the European Union to Ethiopia, says of the $250 million coming from the EU.

“We’re putting migrant-related issues at the heart of our support to countries.”

The initiative is part of a pilot programme also supporting Niger, Nigeria, Senegal, and Mali. The new strategy uses targeted aid to tackle the migrant crisis afflicting both Europe and Africa.

During the UN summit on refugees in New York this September, UK Prime Minister Theresa May described the project as, “a model for how we can support host countries [in creating] jobs for their own people and refugees – a mutually beneficial solution and one we must replicate”.

Total official development assistance to Ethiopia was $3.6 billion in 2014.

“I’ve been idle for three years and my plan is to remain idle. That’s all I can do,” says 28-year-old Daniel, a qualified dentist who fled Eritrea for Ethiopia after his involvement with a locally produced publication drew the government’s wrath. 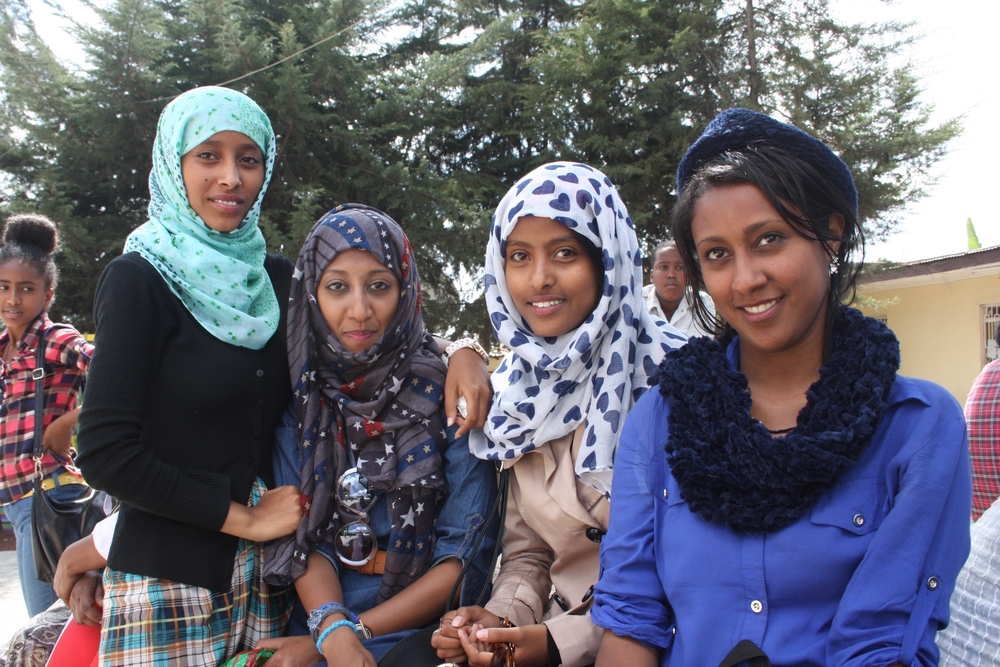 james Jeffrey
Refugees from the war in Yemen

Based on his qualifications, he managed to find a potential healthcare job in Addis Ababa. “The employer said I was a good match, but when he checked with the authorities they said I couldn’t be employed.”

“If Ethiopia feels for refugees, why doesn’t it change the law so they can work,” says Shikatende, a 35-year-old Congolese refugee who has been in Ethiopia for seven years. “It’s a free prison here. We are free to stay, but with no hope or future.”

A change in the law will be required for the industrial park initiative, observers say, although any wholesale opening of Ethiopia’s job market to refugees is highly unlikely while Ethiopia’s 100 million population continues growing at 2.6 percent a year.

“That means creating millions of new jobs every year. The challenge for Ethiopia is huge,” Carreras says, adding that the giving of millions of euros to Ethiopia is far from altruism.

“It’s in our own interests and a matter of survival for us: we can’t be surrounded by countries in difficulties and expect that building a wall or the sea alone will keep us sanitised from others’ problems.”

Build it and they (hopefully) will come

Despite his enthusiasm for the project, Carreras admits that success requires fending off myriad challenges.

“You’ve got to build the right sectors in the right places and ensure the right procurement—achieving all those ‘rights’ isn’t easy,” he says. And even if all that is pulled off, he adds, you’ve then got to attract the investors, after which you have to make sure it’s all sustainable: investors must obtain enough profit so they remain and don’t leave after a couple of years.

Those connected to the Ethiopian government appear confident that history is on Ethiopia’s side.

“Thirty years ago, large-scale labour left the US and Europe and moved to China,” says Zemedeneh Negatu, an economic adviser to the Ethiopian government.

“But monthly labour costs there now are around $450-$600 a month – Ethiopia is a fraction of that, added to which a lot of the raw materials are already coming from here.”

Hence Ethiopia’s embracing of industrial parks, which Prime Minister Hailemariam Desalegn has placed at the forefront of economic strategy.

Seven are in the process of being built at a rough cost of $250 million each. One park is already operating around Awassa, about 300 kilometers south of Addis Ababa, where it’s serving as a promising bellwether, having attracted more investor interest than it could accommodate, according to Carreras.

But there is as yet no timeline for completion of the two industrial parks under the Partnership Framework, and no word yet on how refugees will be chosen for the earmarked jobs.

And all of a sudden, Ethiopia’s reputation as a safe investment option – attracting tens of billions of dollars in foreign investment over the past decade – is looking increasingly shaky. 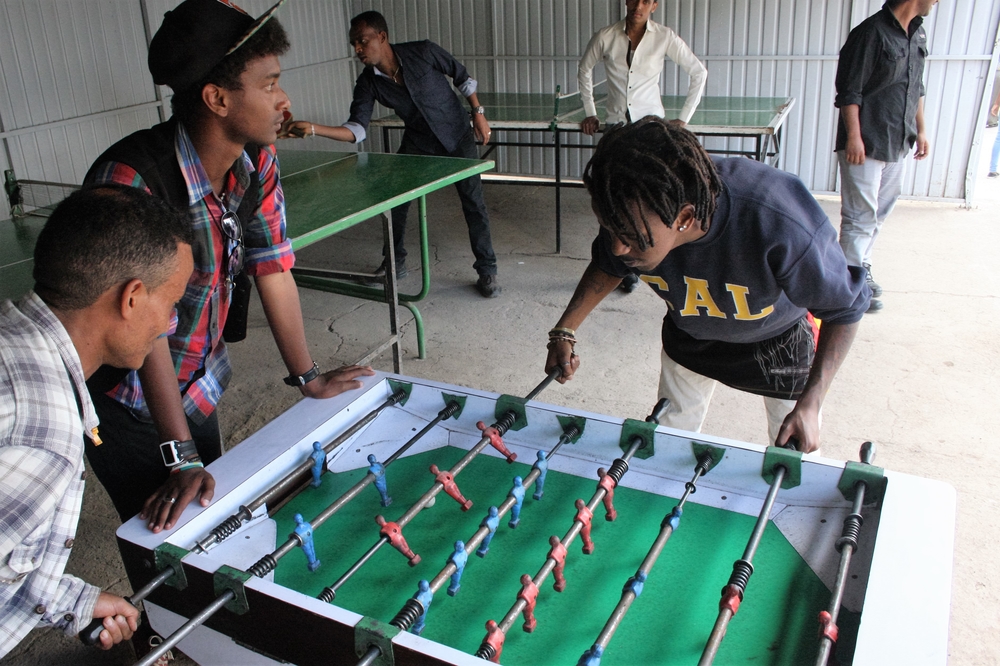 Protests against the government that have been smouldering since November 2015 have taken on a more violent edge recently. At the beginning of October, more than two dozen foreign companies suffered millions of dollars in damage.

The timing clearly doesn’t help when it comes to luring foreign investors into industrial parks. By mid-October, foreign embassies in the capital were holding situation briefings with concerned investors to try and allay mounting concerns.

At least those foreign investors have options.

“The situation makes me nervous,” says Daniel the dentist. “Not only am I a foreigner but I’m from an enemy country. It could get bad. They can beat me or kill me. There’s no one to protect me.”

“It was a bold and brave decision by Ethiopia to offer to take in foreigners when so many of its own have dire needs,” Carreras says, contrasting this stance with how Hungary recently voted against housing about 18,000 refugees.

But at the same time, there is a less salubrious side to the refugee situation in Ethiopia. Encountering groups of refugees in Addis Ababa, it’s not long before someone is sidling up to you, eyes furtively glancing around, wanting to talk about problems.

Many have harsh words for both the UN’s refugee agency, UNHCR, and Ethiopia’s Administration for Refugee and Returnee Affairs, ARRA.

There’s talk of thousands of dollars changing hands so Ethiopians can pose as refugees for resettlement in Europe, of scholarship funding meant for refugees being given to Ethiopians, and of the numbers of refugees in Ethiopia being inflated to ensure foreign funding keeps coming in.

“The numbers are accurate and based on research by UNHCR,” insists Zeynu Jernal, ARRA’s deputy director. “We gain no financial benefits from the Ethiopian operation and are in fact underfunded – last year the required $280 million budget was only 60 percent funded.”

Zeynu acknowledges that giving 30,000 refugees jobs still leaves many more without – hence other schemes being initiated.

These include plans for 20,000 refugee households to be given land so they can farm; 13,000 long-term Somali refugees being integrated into the eastern city of Jijiga with resident and work permits; and higher education opportunities for refugees who pass the university entrance exams.

Some of the refugees in Addis Ababa who have been following news about the initiatives online, however, seem less sure whether they will really benefit.

“Refugees in Ethiopia is a business. That’s what needs to be addressed,” says Shikatende from Congo.

“If you want to solve the refugee problem, you need to deal with the real cause of refugees, which is African leaders – but [foreign donors] are providing them with more money.”