Ten months ago, the UN’s 2030 Agenda laid out an ambitious set of Sustainable Development Goals to be met over the next 15 years as 193 countries committed themselves to “leaving no one behind” in the endeavour to end poverty and promote development.

Was this merely a lofty-sounding phrase or is it actually compelling countries to extend their commitments to the 65 million refugees and displaced people living within their borders?

First, the bad news: the xenophobia and nationalism dominating political discourse around the world threaten to undermine the inclusive spirit of the agenda, and perhaps even the relevance of the UN itself.

Brexit, the EU-Turkey deal, Kenya’s plans to close its largest refugee camp, Dadaab, extremist attacks inspired or directed by so-called Islamic State, the inward-looking, alienating nature of Republican nominee Donald Trump’s presidential campaign, have all contributed to a climate where governments are focused on acting individually to keep refugees and migrants out rather than on addressing their needs.

This doesn’t bode well for those hoping that concrete commitments towards a shared responsibility for the refugee crisis will emerge from the upcoming UN summit on large movements of refugees and migrants, or from US President Barack Obama’s separate Leaders’ Summit on Refugees, nor for hopes that countries will use their development agendas to prioritise the most vulnerable.

The latest draft declaration on the UN summit, to be signed by leaders in New York in September, is peppered with references to the 2030 Agenda.

The agenda, says the declaration, recognises migrants as “agents of change and as enablers for development in countries of origin, transit and destination”; endeavours to “reach the furthest behind first”; calls for facilitating safe migration and mobility; and “explicitly recognises the “needs of refugees, internally displaced persons and migrants”.

Its targets deal with issues specific to refugees and migrants, like “education, labour standards, human trafficking, exploitation of children, access to justice and the building of self-reliance and resilience”.

“Meeting a year after 2030”, the draft optimistically notes, “we pledge to realise the full potential of the agenda for refugees and migrants”.

But during a recent briefing at the International Peace Institute in New York, where panellists attempted to join the dots between the 2030 Agenda and the UN refugee summit, their repeated calls to counter xenophobic rhetoric towards refugees and migrants sounded a desperate note.

Peter Sutherland, the UN special representative of the secretary-general for international migration, warned that pervasive and increasingly dominant political rhetoric was giving rise to xenophobia and racism and “breeding the type of extreme nationalism that many of us hoped was left behind us 40 or 50 years ago”. The optimism many felt when migration made it into the SDGs has dissipated, he said.

Related: What does Brexit mean for refugees?

Besides the “leaving no one behind” spirit of the agenda that calls for addressing the needs of the most vulnerable first, Goal 10 (reduce inequality within and among countries) specifically calls for the “orderly, safe, regular and responsible migration and mobility of people”, through “the implementation of planned and well-managed migration policies” (target 7).

But as Sutherland said: “Words, of course, are cheap.” Rather than embracing the spirit of the global development agenda, political leaders are nurturing “a misguided belief that safeguarding sovereignty means acting unilaterally.

Another negative, which emerged as a source of tension at the panel discussion, is that internally displaced people will be left off the refugee summit agenda. Member states demanded that IDPs be left out because “they are an issue of national sovereignty”, said Karen AbuZayd, the UN special adviser on the summit. A perfect opportunity for countries to commit to taking responsibility for both their own and other states’ displaced people appears to have been lost.

Of the world's 65 million displaced people, more than 45 million are IDPs, pointed out Josephine Liebl, policy adviser at Oxfam. “For the summit to only focus on refugees and not look at IDPs is a huge omission for us,” she told IRIN. “In our programmes we’ve seen that IDPs receive very little protection and assistance.” This is, in part, she explained, because their movement may be less visible, because they are not crossing borders. Another reason, of course, is that IDPs are often caught up in the political conflict perpetrated by the member states themselves.

On the positive side, the 2030 Agenda does attempt to address many of the root causes that drive people to flee their homes, including poverty, climate change-induced disasters, and conflict. The wide-ranging and ambitious agenda has a better chance than the Millennium Development Goals, its predecessor, of tackling what drives migration in the first place, said Paul O’Brien, Oxfam America’s vice president for policy and campaigns.

O’Brien said the fact that three interest groups prevailed in developing the agenda – those wanting to finish the goals of the MDGs, nation states calling for more economic growth to sustain development, and those pushing for solutions to global challenges like climate change and structural inequality – has led to an agenda that is far better positioned to address the underlying causes of mass displacement of people.

Also, the 2030 Agenda is about universality. “It places obligations on countries accepting refugees and migrants to fulfill commitments regarding education, healthcare, job opportunities and everything else that the 169 targets cover,” said O’Brien. This, he told IRIN, “creates an avenue for accountability”. “There is nothing in the SDGs that says these commitments apply to countries’ own citizens only.” 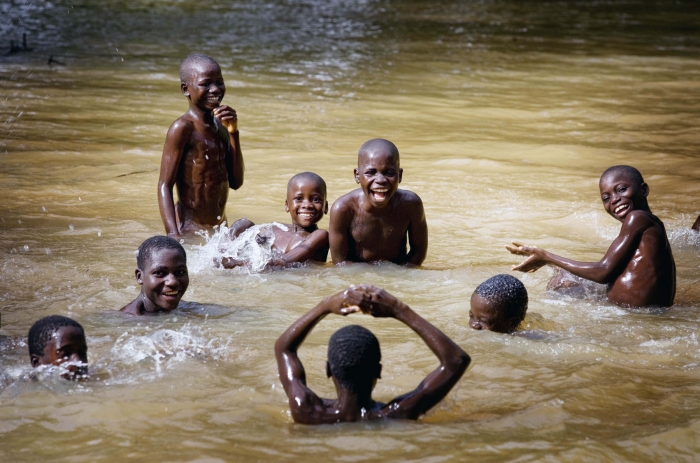 Kate Holt/IRIN
Young boys swim in a river in Kaduna State, Nigeria. Will sub-Saharan Africa ever be able to meet UN sanitation targets?

Christine Matthews, deputy director of the UN refugee agency (UNHCR) office in New York, told the panel that the 2030 Agenda’s call to “leave no one behind” was a landmark opportunity to strengthen the bridge between the humanitarian and development arenas, and for countries to incorporate building resilience and self-reliance of displaced people into their national and local development frameworks. Implementation of Goals 1 (no poverty), 10 (reduced inequalities), and 16 (peace, justice, and strong institutions), in particular, will stop people from leaving their homes in the first place, she said.

There is at least some evidence of progress in this regard. Jessica Espey, associate director of the UN Sustainable Development Solutions Network, cited Nigeria as an example of a country looking at “leaving no one behind” as a way to address conflict. And the needs of Syrian refugees comprise a central component of Jordan’s new development plan, for example.

The World Bank and other donors are also supporting a scheme where Jordan gives employment, entrepreneurial support, and education to Syrian refugees in return for trade benefits. While the primary intention may be to stop Syrians from moving to Europe, it is also a sign that the focus – both within and outside the UN – is shifting to more development-oriented approaches to tackling the refugee crisis.

Many see the inclusion of Goal 16 (peace, justice, and strong institutions) as a big positive in addressing a major driver of mass displacement – conflict. “During the SDG negotiations, many member states didn’t want to take on humanitarian and peace and conflict issues,” said Espey. “They saw this as the responsibility of the Security Council.

Related: The EU-Turkey migration deal is dying. What's Plan B?

“The problem then is that the SDGs don’t tackle a number of pressing issues to do with instability and conflict,” such as refugees and displaced people. “Goal 16 (peace, justice and strong institutions) ended up being the closest thing to a compromise.” Besides the political sensitivities, Espey pointed out that conflict and migration present an intractable and daunting challenge to an already overloaded and ambitious development agenda. “Adding governance to the agenda was just too big an issue to bite off,” she said.

Nevertheless, Goal 16 is being seen as an important “political placeholder for these crises”, as she put it, and, she agreed, for strengthening the humanitarian/development nexus. “The goal ensures that these issues of conflict and migration are being discussed as part of national priorities. And ‘leave no one behind’ gives leverage to tackle this goal.”

A final positive is the inclusion of “disaggregated” indicators: applying the different categories such as sex, race, and age to the population so that vulnerable people do not slip under the radar, as was the case with the MDGs. ‘Migratory status’ is at least one of these categories in the SDG indicators, stressed Casey Dunning, a senior policy analyst at the Centre for Global Development. Unless refugees and other displaced people are identified and counted they won’t be able to access services.

But in Dunning’s view, the interest for collecting this detailed disaggregated information is “just not there at the moment”. Not only, she said, are countries intent on looking inward and putting up fences, they are more focused on their own economic growth than on ensuring that no one is left behind.