There is only one supermarket at Jordan’s Azraq refugee camp. It’s a cavernous space, packed with crowds and stacked with tins and boxes. Sabha, a mother of six who came here from Aleppo four months ago, browses the tinned pulses, eggs, rice and fresh vegetables that line the shelves and sits on her stacked rations for the month as she queues to buy them.

When she pays, however, Sabha doesn’t take out her purse. She simply looks into a small black machine, and buys her groceries using only her eyes.

Sabha is using a new iris scanning system that’s just been rolled out in Azraq, a camp that houses some 30,000 Syrian refugees in the Jordanian desert.

The machine takes a detailed reading of her eye, matches it against hundreds of thousands of records, and deducts her grocery bill from her monthly World Food Programme allowance. This is relatively groundbreaking technology, and it’s now the standard means of distributing food aid in Azraq.

“It’s a first not just for refugees, but for the whole shopping and retail industry,” Shada Moghraby, WFP’s spokeswoman in Jordan, told IRIN. Soon the scanners will be in Zaatari, Jordan’s largest camp for Syrians, and it’s hoped they’ll appear in urban supermarkets too, as the 85 percent of Syrian refugees who live in Jordan’s cities already use iris scanners to withdraw monetary assistance from cashpoints.

But not all refugees are convinced of the technology’s value – Sabha says it actually makes her shopping more of a slog – and privacy advocates are concerned too.

“The fact is that it is so powerful,” says Eric Töpfer of the German Institute for Human Rights. “If [the data] doesn’t stop [at aid use] and it’s shared more liberally and used with less control or without controls… then it can do harm.”

Sabha’s shopping is made possible by a biometric data network that’s now a normal part of life for the more than 600,000 Syrian refugees registered in Jordan.

Iris scans, taken when refugees register in the country, are stored in a database kept by the UN’s refugee agency, UNHCR, and used to verify individuals as they seek assistance from UNHCR and, more recently, other UN agencies like WFP.

The system has significant benefits over the cards it’s replacing. Cutting down on paperwork by connecting recipients direct to the allowances they receive, it’s a more secure method of delivery that ensures allowances are only used by the people they’re intended for.

Moghraby says that feedback from refugees in Azraq camp has generally been positive, with particular advantages for the elderly.

“It eliminates hassle and waiting time and can’t… get lost in the way cards can,” she says.

At the supermarket, however, the refugees themselves don’t seem convinced at all.

Sabha says that the eye-scanning system has made her life more, not less difficult. “I’m pregnant, and I’m frightened for my unborn child,” she explains, gesturing at the chaos of the supermarket.

Because she’s named as the head of household responsible for the money only she can access the monthly WFP allowance with her eyes.

“I’d rather my son go and get the food for me, but he can’t because of the iris scanner. My sister is in the same situation. She has six kids. They’re young, but she has to take them to the supermarket when she goes to pick up food.” 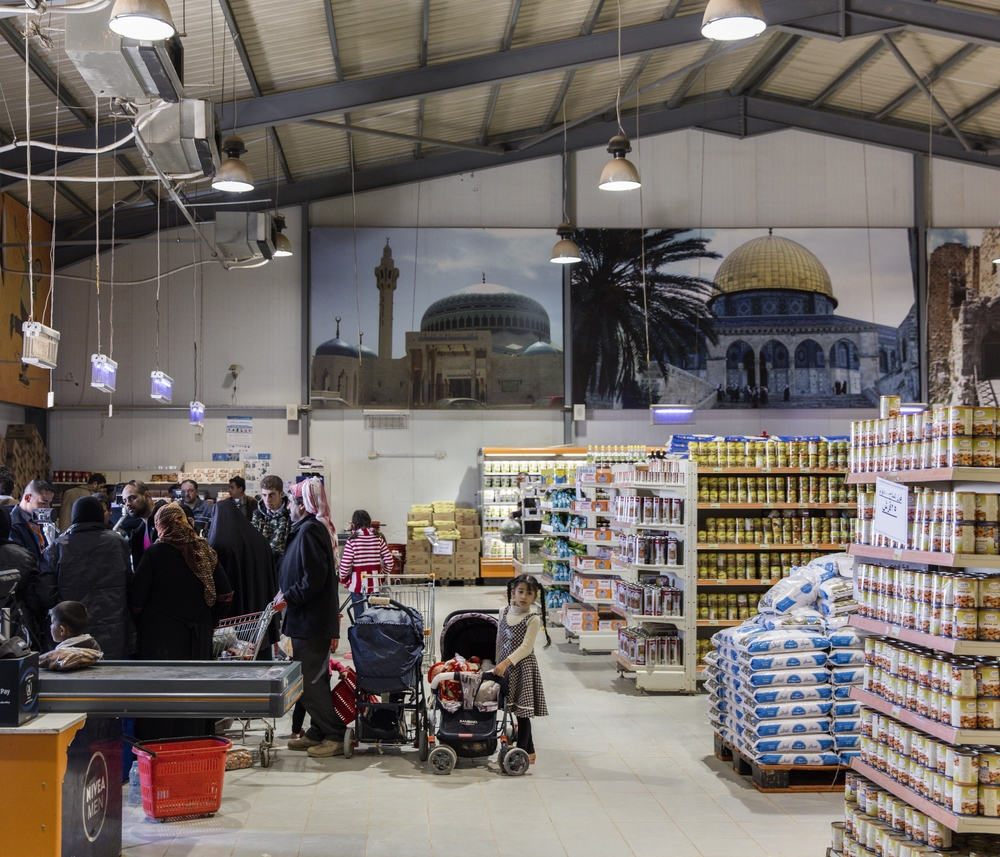 Ivor Prickett/UNHCR
Azraq has only one supermarket

Her grievance becomes a common theme among the other shoppers: many say they prefer the older cards, which allowed them more freedom to cooperate with friends and ask family members to run errands on their behalf. The fact that Azraq’s single supermarket takes significant time and effort to get to only makes the situation tougher.

Responding to the criticisms, Moghraby says that people experiencing problems with the eye scanning system can request not to use it, or to transfer the account to a family member’s iris.

But the shopping refugees didn’t seem to be aware of this option. Moghraby also points out that the transfer of vouchers from person to person is one of the things the system seeks to avoid.

When the pluses are the minuses

This is not the only way in which a benefit of biometrics can become a drawback.

Iris scanning technology’s greatest selling point is that it allows refugees to firmly establish their identity without carrying documents, and thus securely access services and aid. But this is also what makes the possibility of abuses or errors particularly dangerous.

Eric Töpfer, a researcher at the German Institute for Human Rights, is worried that unauthorised actors might be able to access refugees’ information, or that databases may be authorised for new purposes such as counterterrorism or tracking immigration.

“Given the increasing desire of security agencies to cross-match existing databases to prevent ‘foreign fighters’ travelling around the world, I see the risk that the massive data pool being built up by the UNHCR will attract the interest of these actors,” Töpfer explains.

Indeed, the head of Germany’s domestic  intelligence agency has said the so-called Islamic State was sending fighters disguised as refugees to Europe, so it’s easy to imagine that European intelligence agencies would like to get their hands on such a cache of data.

“Once the data of refugees is let out of Pandora's box and circulates within the intelligence community I doubt that affected refugees will ever be able to reclaim control, which might in the long-term pose serious risks if the data falls into the wrong hands,” he says.

Volker Schimmel, a senior field coordinator at UNHCR in Amman, played a key role in developing the iris scanning system and has thought carefully about these risks.

Schimmel has the unusual air of a chess player, perpetually considering multiple philosophical, technical and political dimensions of a humanitarian puzzle, and, like Töpfer, he knows the near certainty of a match offered by biometric testing is both a benefit and a risk.

“The real practical scenarios as to how this could be misused have neither been developed nor tested, thankfully,” he tells IRIN. “But the risks are anything from identity theft, on one hand, to manipulating what we see as the whole identity of an individual, to use that information, to filter out more people that you then target easily.

“The possibility of either manipulating identity or using it to target, particularly for harmful actions, will always be there in some shape or form,” says Schimmel.

He believes however, that the UNHCR have a strong strategy when it comes to sharing personal information and states unequivocally that refugees biometric data is not shared with governments.

Schimmel acknowledges that no means of encryption is certifiably unbreakable, but like Moghraby at WFP he’s confident that refugees’ data is reasonably secure. The key to security, he explains, is a data encryption system that means no biometric information is transferred between agencies. When a refugee looks into the scanner at the checkout, the image that’s taken is condensed down and encrypted before being sent through the infrastructure, then decrypted to be compared with the database records on the other side. The image itself, Schimmel stresses, is neither sent nor stored on the camera itself.

Only UNHCR possess the second half of the encryption key that’s needed to see an individual’s record, Schimmel says, adding that even the company that makes the system can’t see them.

Information is decrypted using the UNHCR cipher, and it’s the results of that - and not the biometric data itself - that is communicated with other agencies like the WFP.

In Azraq, and outside, few of the refugees IRIN speaks to confess to being anxious about the security of biometric testing. A few say they are worried it will affect the health of their eyes.

But also they don’t have the luxury to refuse the technology: registration and accessing aid depends on it. A population as vulnerable as refugees fleeing a war zone have little choice over whether they are able to accept or refuse biometric registration.

That leaves humanitarian agencies with a heavy responsibility when it comes to measuring up the costs and benefits.

At the International Committee of the Red Cross, Information Manager Charlotte Curtet tells IRIN that biometric systems haven’t been adopted. They’re looking into the technology to make sure it doesn’t betray key humanitarian principles and cases no harm – she calls these “absolute criteria”.

The ICRC is balancing the immediate practical considerations of refugees like those in Azraq, the bigger organisational impacts, and the security risks that biometric data necessarily implies.

Curtet says that refugees must be fully informed about what will happen to their information, and that it must never be used beyond that point.

“It’s just as when we’re handing over our information to a doctor we wouldn’t expect to see it somewhere else,” Curtet tells IRIN. “We shouldn’t collect something with one purpose, and then allow it to be used in a different way, or even to be negligent about how it’s used.”

Aid agencies are cautiously optimistic about the future use of biometric data – a new briefing paper from the UN's aid coordination body, OCHA, stresses the importance of "responsible" data use, and protecting vulnerable populations from potential harms. Although legal restrictions so far limit its use in Turkey, the UN hopes to expand iris scanning for Syrian refugees in Lebanon, especially for access to health care. That means moving forward slowly.

“We're fine now but I think if this catches on, and becomes something that more and more users want, we have to be careful,” Schimmel says. “So it’s important to keep up the debates, to keep up the discussions, the criticisms… that gives us the confidence that we’re doing the due diligence and that it’s good enough”