At the end of May, we reported on the desperate situation facing civilians in eastern Ukraine, trapped near the frontline in rebel-held parts of the Luhansk and Donetsk regions with little or no access to basic services.

Four months later, winter is approaching and another lifeline has just been taken away: 10 of the 11 international aid agencies operating in Luhansk were ordered out last week by the rebel authorities. In the rebel-held part of Donetsk, many operations had already been suspended for months.

Separatist forces seized parts of the Donetsk and Luhansk regions in April 2014, months after Russian-backed president Viktor Yanukovych was driven from power by a popular uprising, which led Russia to annex Ukraine’s southern Crimea peninsula.

We are extremely concerned about the wellbeing of the thousands of innocent civilians trapped in the crossfire of the conflict, especially with winter and its harsh conditions on the horizon

Almost a year-and-a-half of war, which displaced more than 1.4 million people, has left hospitals in frontline areas short of essential supplies, while the elderly and the sick struggle to get by as they can’t access pensions or services provided by the Western-backed Ukrainian government. Many have been relying on aid from the Russian side or from a Ukrainian oligarch.

“We have little supply from Ukraine… much of the food is coming from Russia,” Donetsk resident Natalya Chervinskaya told IRIN. “People are worrying that there will be a fall in supplies. The prices are getting higher and higher… prices are sometimes too high.”

The Ukrainian government has also put limitations on commercial cargo entering rebel-held territory and restricted the movement of civilians, leading to long queues of vehicle and people at frontline checkpoints – including for aid agencies – and less stock in stores.

“Many people buy extra food as a result of the winter because people are afraid a little bit about food supply in the winter,” Chervinskaya said.

In the winter months, people can’t rely on growing food in their fields while at the same time they need more calories due to the cold. Dwindling supplies will push prices at stores even higher while people will also need to spend more money on gas for heating, if they have that luxury.

Organisations ordered out of the rebel-held side of Luhansk include UNICEF, the World Food Programme (WFP), UNHCR, Médecins Sans Frontières, People In Need and Mercy Corps. 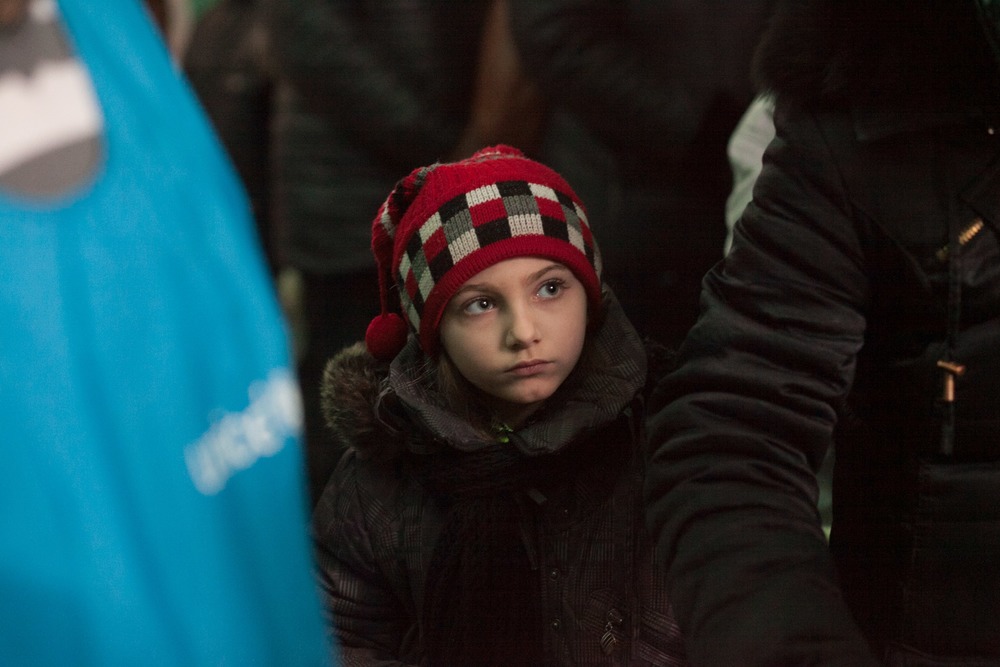 Shortages of medicines are a particular concern as chronic diseases like diabetes are prevalent among vulnerable groups of people still living in towns and villages near the frontline, many of whom are elderly.

MSF said it had closed its offices in rebel-held Luhansk, where it supported 109 health and social facilities with medicines and equipment. It also ran mobile clinics in 35 locations and donated medicine and supplies to help treat up to 37,500 people.

Several agencies and organisations expressed dismay at the rebel move, which comes after almost 8,000 people have been killed in almost 18 months of fighting.

“We are deeply disappointed by the disruption to our operations and are extremely concerned about the wellbeing of the thousands of innocent civilians trapped in the crossfire of the conflict, especially with winter and its harsh conditions on the horizon,” Mercy Corps spokeswoman Lynn Hector said in a statement sent to IRIN.

The UN’s refugee agency, UNHCR, said it had been working as normal in rebel-held Luhansk until last Wednesday and had received no prior warning it would have to stop its activities 48 hours later.

“We were told that our application to work in [Luhansk] had been rejected and that we would need to leave,” UNHCR spokesman William Spindler told IRIN. “We were given until Friday… and that was the case for many, many other agencies as well.”

Of the 11 UN agencies and aid organisations operating in rebel-held Luhansk, only the International Committee of the Red Cross said it had not been ordered out. However, it did say it had suspended its activities there until it could get further clarity on the situation from the rebel authority, known as the Luhansk People’s Republic. Its operations in rebel-held Donetsk were also suspended at the start of August but resumed about a week ago.

WFP and UNICEF said they had not worked in rebel-held Donetsk since the end of July and were still awaiting permission from the Donetsk People’s Republic (DPR). All the UN workers contacted by IRIN said they were not working in rebel-held Luhansk but that there was some confusion over whether a final decision had been made.

UNICEF has suspended psychosocial support for 30,000 children. It estimates that 1.3 million people’s access to water is at risk and 200,000 children are more vulnerable to death or injury due to restrictions on landmine education. Some 500,000 children up to 10 years of age urgently need polio vaccination in rebel-held areas, and many of the 8,000 tuberculosis and HIV/AIDS patients will die unless medicine is provided, the UN agency said.

WFP had been providing food assistance to about 45,000 people in rebel-held Luhansk. The emergency food provider says it had 20,000 food parcels ready to be sent to both Luhansk and Donetsk, but they are now on hold.

There are fears too that the rebel authorities might start imposing greater bureaucratic hurdles on local NGOs, forcing them to increase their cooperation with the separatists.

Olga Kosse, with Responsible Citizens, which provides food, health and household items to civilians on both sides of the frontline, said she was worried that if this is the case the Ukrainian government might not let her NGO work in the territory it controls because it would suspect her group of colluding with the enemy.

“Now it’s really complicated to be neutral in this conflict. So if you for example work with DPR accreditation because you don’t have any choice… [it] seems like you work with terrorists. That’s why we are a little bit afraid about this.”

Kosse also said it was impossible for local groups like Responsible Citizens to replace the work of some of the suspended international agencies because they have much smaller budgets.

Responsible Citizens has one staff member in rebel-held Luhansk who is a local and can continue operating but is limited because the work was in cooperation with international agencies that have now been ordered out.

Without the help of those agencies for the last two months in Donetsk, Kosse said many locals had been trying to figure out how to cope on their own. One community had been getting help rebuilding a school and several houses, but that aid has now stopped.

“Because winter will now be very soon… these people are now thinking about how to do this by themselves, or find a new place where they can live, or how to rebuild their house, so that’s why they are really sad.”

But not all are unhappy with the latest turn of events.

Such is the level of suspicion that Kosse said many locals agree with the rebels’ decision because they believe the aid workers are spies.