A coup, a counter-coup, a stand-off, a missed ultimatum to lay down weapons: the uncertain situation in Burkina Faso is developing quickly and no one knows how it will end.

After the army marched into the capital of Ouagadougou overnight to demand that the presidential guard disarm, regional mediators are gathering today at an ECOWAS summit in Nigeria to discuss the details of an accord aimed at ending the post-coup crisis and restoring the country to civilian rule.

It was the elite 1,300-strong presidential guard, known as the RSP, who set off the crisis by overthrowing the interim government last week and kidnapping transitional President Michel Kafando. They were unhappy at a law banning candidates who had supported former president Blaise Compaoré from running in elections to find a new leader slated for next month. Compaoré was overthrown in a popular revolution last October as he tried to amend the constitution to extend his 27 years in power.

Proposals from Economic Community of West African States (ECOWAS) mediators call for the reinstatement of Kafando as well as the continuation of the electoral process and the transition to democratic rule. However, they also include more controversial items such as granting amnesty to those involved in the coup. There is also no offer of compensation to the families of the 13 people killed or more than 100 people injured in the ensuing crackdown.

“When you look at all the suggestions from this ECOWAS protocol, you feel like they just gave everything to the coup-makers,” Mathias Hounkpe of the Open Society Initiative for West Africa (OSIWA) told IRIN. “There are still a few questions that need to be answered clearly and I can understand why people are feeling betrayed.”

Boukari Ouedragogo, a trader in the capital Ouagadougou, told IRIN: “I am very angry. How can they give amnesty to the putschists (coup-makers) after they have killed people and thrown our country into disorder? It is not right.”

General Gilbert Diendéré, the former right-hand man of Compaoré who led the coup and is the self-appointed president of the junta’s National Council of Democracy (CND), said on Monday evening that he plans to step down and return the country to civilian rule. As a gesture of good faith, he released Yacouba Isaac Zida, prime minister of the interim government and former RSP leader, who had been held hostage since the coup.

General Gilbert Diendere, president of the CND (National Council for the Democracy), a new organ tha 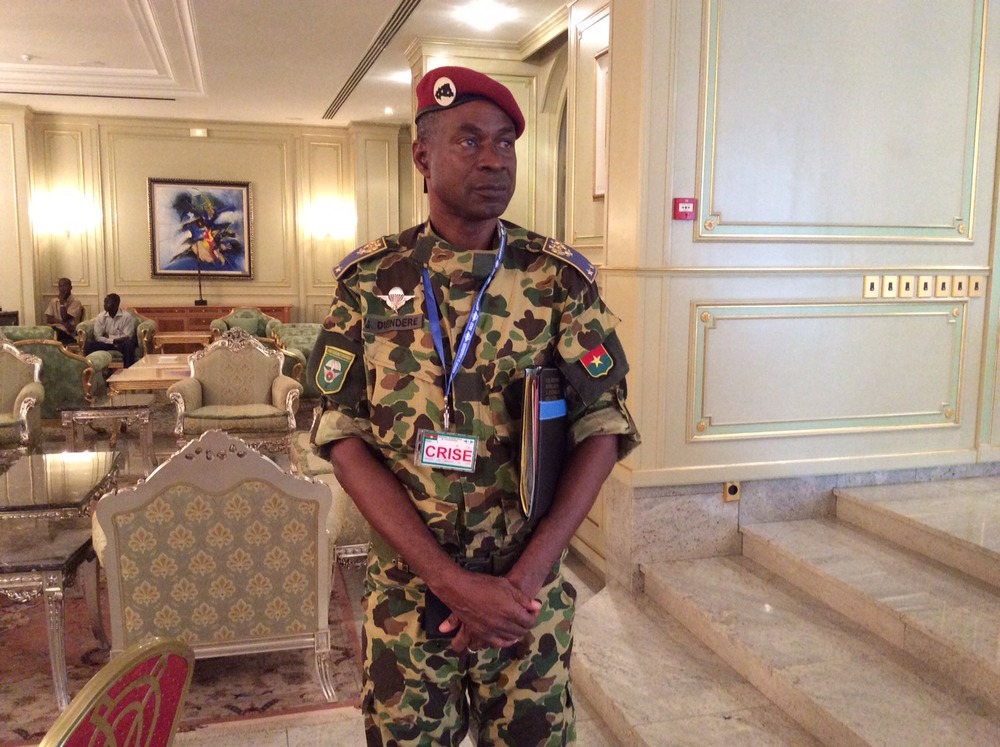 It remains unclear, however, which parties will sign what, if anything, at Tuesday’s meeting in the Nigerian capital, Abuja.

“They [these terms] have clearly been proposed by ECOWAS mediation, but the opposition we are seeing from the transitional authorities and from the political parties from the former opposition and from the civil society will make it very, very hard to be implemented and particularly to have amnesty implemented,” said William Assanvo, a senior researcher at the Institute for Security Studies (ISS).

But OSIWA’s Hounkpe said that getting the coup-makers to agree to anything without an amnesty clause would be a challenge.

“It’s not easy to ask coup leaders to hand over themselves and go to trial,” he said. “So most of the time it is necessary to give them something. But you also need a mechanism to guarantee that they will not come back again. If they just walk away and remain with the same strength, the same equipment and everything, they may just come back after the election, which is a threat to the transition.”

It appears that the catalyst for the coup may have been the final report by the Commission on National Reconciliation and Reforms calling for the dissolution of the presidential guard.

“The Commission’s report was both a betrayal and a sign of impending powerlessness,”  said Dorina Bekoe, a faculty member at the Washington DC-based Africa Centre for Strategic Studies.

Bekoe explained that in May the parliament had approved an amendment to the electoral law that prohibited anyone who had actively supported the alteration of the constitution to allow Compaore another term from standing for office.

But in July, the ECOWAS Court of Justice announced that the amendment was illegal. Burkina Faso’s constitutional court disagreed and ruled on 9 September that some previously banned candidates were clear to run while others were still not.

Former members of Compaoré’s regime were not happy. Under the deal being put forward by the ECOWAS-led mediations team, all candidates, even those formerly excluded, would be allowed to run.

This change is broadly welcomed by observers and others in the country who feel it will help Burkina Faso’s transition, and at no real risk as the voters themselves will still ultimately be able to cast their judgment on the candidates.

“[There is a] need for an inclusive transition for Burkina Faso, as a sign of what a more democratic country looks like,” Bekoe said. “Members of the former ruling party should have the opportunity to compete in elections. If they should lose their positions by the ballot box, it would be a significant message from their constituents. Similarly, if they were to gain or retain their seats, it may have been done by responding to their constituents – the essence of representative government.”

Ouagadougou resident Mamadou Congo agreed. “It is not a problem if former supporters of Blaise Compaoré can stand in the elections, because they will be punished by the people not voting for them,” he told IRIN.

While Compaoré’s opponents worry that allowing an amnesty to the presidential guard and letting the former president’s supporters stand in next month’s elections will only encourage further interference in the democratic process, experts said it could be the only realistic path to a successful democratic transition.

“In the same way that power-sharing agreements are critical – if flawed – components of resolving civil wars, peacefully transitioning from autocracy to democracy requires negotiations that must secure the buy-in by vested interests of the old regime,” Bekoe said. “In the case of Burkina Faso, Compaoré’s departure notwithstanding, the political, social, and security institutions that supported his regime remained powerfully in place.”

However, ISS’s Assanvo warned that the negotiations ahead would be far from easy.

“The next step will be very tricky,” he said. “The position of the presidential guard and the ability of either the international community or the rest of the Burkina Faso army to prevent the RSP from intervening in the political process will be key.”