Mohamed Hossien Geeldoon never questioned putting his life in the hands of smugglers who promised to covertly transport him from his home in Somaliland in the Horn of Africa to Europe.

“You would never try to go legally as a Somali; it’s impossible,” said Geeldoon, now 27. “But once you have the idea of migration in your head, it doesn’t go away.”

The then 21-year-old was convinced that making it to Europe was his best chance of getting a higher education and bettering his future. But after a two-year long odyssey mired with multiple failed attempts to cross the Mediterranean and great personal and financial costs to him and his family, he was back where he started.

He is a reminder that migrants were throwing themselves at the mercy of the Mediterranean long before the number of attempted crossings reached the levels we are seeing today – with nearly 160,000 sea arrivals so far this year, according to the International Organization for Migration.

As the European Union continues to engage in deeply divisive talks about how to deal with the influx to its shores, Somaliland – a self-declared state internationally recognised as an autonomous region of Somalia – is having its own conversation about why so many of its young people are risking everything to reach Europe.

Policymakers in this region of 3.5 million people, where youth unemployment sits at between 60 and 70 percent, are struggling to come up with ways to convince would-be migrants that the often hollow promise of a better life in Europe is blinding them to the perils of getting there.

Somaliland's immigration commissioner Maxamed Cali Yuusuf says as many as 300 people, predominantly young men, leave Somaliland each month. They rely on a sophisticated network of smugglers to take them through Ethiopia, Sudan and Libya, with Europe as the promised destination.
Lanky and always sharply dressed with plastic-rimmed glasses framing his thin face, Geeldoon wants to serve as a cautionary tale for others. He visits schools across the country to share some of the harrowing details of his attempted journey to Europe.

There is no shortage to choose from. At one point, after his smuggler abandoned him and his fellow travellers in the Sahara desert in Sudan, Geeldoon walked for 12 days before reaching the Libyan border. Fifteen of the 32 people in his group did not survive the desert trek.

See: Migrant dreams that wither and die in the African desert

After a two-year ordeal trying to reach Europe, Mohamed Hossien Geeldoon returned to Somaliland to try to convince other young people not to risk illegal migration. 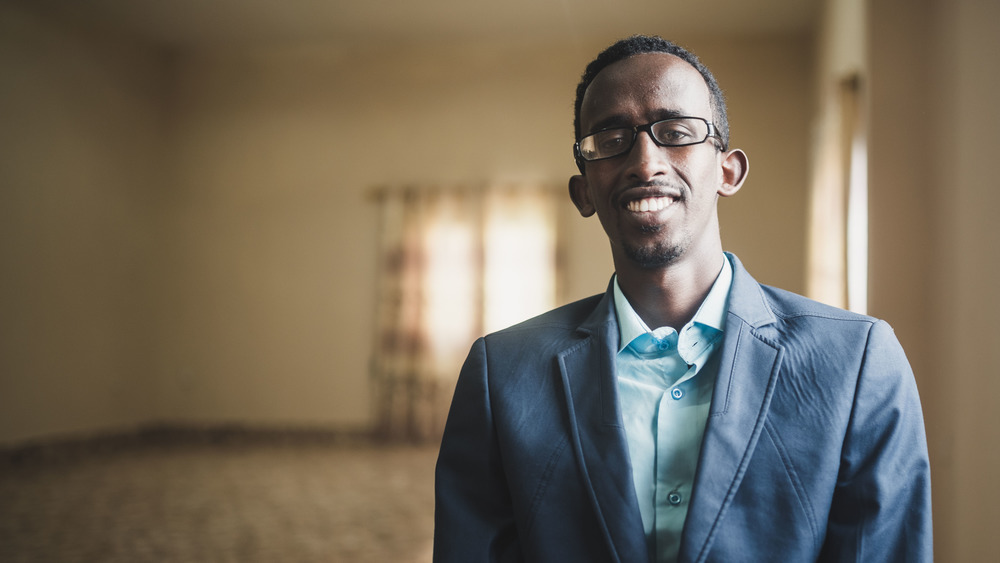 Other incidents included witnessing a smuggler near the Libyan border beat a pregnant woman because her family had not paid a ransom demand, and watching a man jump from an overcrowded boat that had been at sea in the Mediterranean for three days after he thought he saw land.

But the disillusionment with life in Somaliland that so many young men and women feel is difficult to overcome. Research has consistently found that migrants are usually well-informed about the dangers that lie ahead, but view the expected benefits of reaching their destination as worth the risk.

“Sometimes I tell people my story, and they still go,” Geeldoon said.

Jama Musse, director of the Hargeisa Cultural Centre in the capital, said that young people in Somaliland feel a lack of hope and a disconnection with older generations who grew up with different expectations.

“I consider peace an achievement; for them this is normal,” he said, referring to Somaliland’s battle for its self-declared independence from Somalia in 1991 after several years of fighting.

Somaliland’s youth has experienced stability and a form of nascent democracy not found in many other countries in the region, but is nevertheless disenchanted with its government and its lack of capacity to help them stake out a place in an increasingly globalised world.

At a recent event at the Cultural Centre to discuss youth migration, young participants clamoured at the opportunity – microphone in hand – to grill government officials.

“I see the government as the smugglers,” quipped one. Many accused the government of enabling corruption and serving an entrenched tribal system that inherently favours elders at the expense of younger members of society.

The government “woke up” to the unfolding crisis of youth migration in 2013, said Abdirisaq Mohamed Saed, head of international cooperation at the foreign ministry. That year, Somaliland’s government formed an inter-agency committee to propose policy solutions and create more jobs. Saed described advocacy campaigns, a renewed commitment by law enforcement to arrest smugglers, and the establishment of a government-sponsored employment centre as successes that have begun chipping away at the problem.

But he admitted that government funding had tapered off and that more youth are migrating than ever before.

Nimo Ali, a PhD student at SOAS, University of London, who is studying the impacts of illegal migration, suggested that the government’s focus on job creation is unlikely to have any significant impact on migration flows. Creating jobs on the needed scale would require major foreign investment and significantly improved infrastructure such as better roads and electricity connections. In the short term, she said, Somaliland needs to address some of the social factors driving migration.

In particular, she highlighted the unintended consequences that the return of Somaliland’s diaspora from abroad is having on the psyche of younger generations.

“They create a narrative that if you leave and come back… you have opportunities,” she told IRIN. Those that return from abroad bring language skills and foreign passports that make them attractive candidates for government and NGO jobs, which are known to be some of the highest paying.

The diaspora’s economic contributions, through remittances and local development of business are indispensable to Somaliland’s economy, but Ali worries that this is perpetuating a social hierarchy whereby respect and prestige are derived from being a dual-passport holder.

The result is that many see the only way to get ahead as to travel outside the country.

“It’s good to acknowledge [the diaspora’s important] role, but we have to be careful of the message that we send to young people,” Ali said. “You need to make sure that diaspora contribute to and don’t replace the efforts that locals are making.”

Others argue that the international community’s long-time stance of not recognising Somaliland’s independence forces people to migrate illegally. They point out that with the exception of Ethiopia, Somaliland does not host any foreign embassies and thus a Somaliland passport does not take holders far beyond its borders.

Tom Vens, head of the politics, press and information section of the EU delegation to Somalia, disputes the argument that Somaliland’s ghost nation status fuels migration. He believes there is “an important role for legal migration” through scholarships and other policies that encourage it, but that “it will not address the fundamental problems” driving the exodus.

If the opportunity presented itself, Geeldoon would still go to Europe, but he vows to never again try it illegally.

But asked if he was on the winning side of the battle against illegal migration, he responded, “No, no, no,” and shook his head.