Read about what we achieved.
FREETOWN

Fear and poverty are keeping many children in Sierra Leone out of classrooms and on the streets hawking or labouring– another effect of the Ebola outbreak that kept schools closed for nine months.

Four weeks into a new term, a third of the seats in Freetown’s Kroo Bay Community Primary School are still empty.

“Most [parents] complain that they don’t have the money to send kids to school. There are many challenges in the school and the community. Kids have a lot of fear,” headmaster Abdul Bundu Kamara told IRIN.

To counter this, public information campaigns have been launched, to persuade parents that schools are safe and precautions have been put in place.

To reduce the risk of Ebola spreading, restrictions on people’s movements, public gatherings and business hours are still in place in Sierra Leone. Trading is prohibited after 6 pm on weekdays, after noon on Saturdays and all day on Sundays.

“They can no longer sell at night and people are afraid to buy [their products]. They want their children to come to school but it’s just the financial pressure that’s the problem.”

Save the Children estimates that just 10 percent of children in the capital turned up on the first day of school. While a low attendance rate is normal for the very beginning of the school year, Save the Children’s country director for Sierra Leone, Rob Macgillivray, said the Ebola outbreak had made things much worse this year.

“Trying to stop kids from working and going [back] to school will be a mammoth task,” he said. “The kids have gone backwards in this time.”

Forced to drop out

The World Bank has estimated that Ebola will cost Sierra Leone’s economy $920 million in 2015. Around 180,000 Leoneans have lost their jobs since the beginning of the outbreak.

Even before Ebola, more than 60 percent of the population lived on less than $1.25 a day, according to the United Nations Development Programme.

Mohammed Mansaray, a father of four from Freetown, who recently lost his parents and grandmother to Ebola, along with the work he used to do at his mother’s water distribution company, said he has been struggling to make ends meet.

"The work gives me pain in my head. I want to go to school but my dad says I must wait until next year"

“My children are no longer in school,” he told IRIN. “I’m not financially strong because of Ebola.”

Though primary school is normally free and the government has said it would cover secondary school fees which cost around 75 000 Leones ($17) per school term in government schools, Mansaray, like many other parents, says he is unable to afford unofficial school costs such as teachers contribution fees, uniforms and other school supplies.

Hassan Kamara, who used to finance his own education at the Prince of Wales High School in Freetown by selling used clothes in his free time, says he no longer earns enough to re-enroll.

“We had many clients before and I went to people’s homes, but then with the Ebola by-laws and quarantines I was not able to sell,” Kamara said, explaining that he used to earn as much as $10 dollars per day. Now he is lucky to earn two.

“Most of my friends live the same struggle,” he said, adding that many now work as motorcycle taxi drivers, instead of going to school.

Like Kamara, even many younger students have been forced to start working, just to help the family survive.

“I see many children helping their mothers to sell food and other items,” said Bob Allen Shiaka, the headmaster of the Church of Christ Primary School.

According to a Freetown-based NGO that works to support street children, Don Bosco Fambul Sierra Leone, the number of homeless youngsters living on the streets in the capital increased from 2,500 in early 2014 to an estimated 4,000 this year.

A normally overflowing classroom in Sierra Leone's Freetown's Tengbeh Town remains mostly empty, despite school having resumed in April for the first time since the Ebola outbreak began. 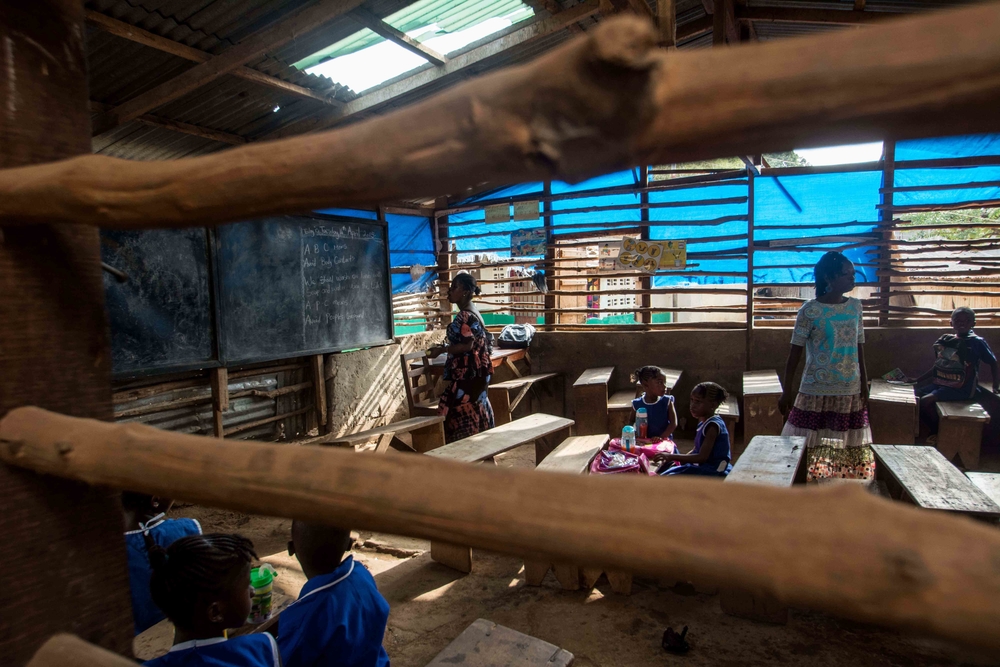 Isabelle Risso-Gill, a researcher for Save the Children who has been interviewing children affected by the epidemic, said almost all those she spoke to had had to work during the Ebola crisis but not before it.

“Market prices have increased so they’ve been asked to seek financial contributions for their parents,” she said, adding that many families lost the main breadwinners during the Ebola outbreak.

Fourteen-year-old Gibrilla Moiforay, for example, from the fishing village of Lakka, just outside Freetown, has been labouring as a construction worker since schools closed last year.

He used to attend class 6 at Lakka Community Primary School, but was forced to drop out after this year due to Ebola-related financial difficulties at his father’s carpentry business.

“I don’t like the work; it gives me pain in my head,” said Moiforay, who is tasked with, among other things, carrying concrete blocks around the construction site. “My father doesn’t have money…I want to go to school this year but my dad says I must wait till next year.”

Two weeks after the reopening of schools, UNICEF started distributing more than 1.8 million free school kits, enough for every registered school child in the country. Kits include exercise books and stationary.

UNICEF hopes these will encourage children to go back to school. 17,000 radios have also been distributed to help those out of school to access broadcast lessons, which have been extended.

Despite these efforts, development organisations worry some parents might wait until the next school year to enroll their children.

No country has shut down an entire education system for a period as long as this and extending children’s time out of the classroom is likely to  lower literacy rates and raise levels of child labour, school dropouts and  teenage pregnancies, according to Save the Children.

Headmaster Kamara said the best he can now hope for is that his students hold off working until after school hours.

“I see them in the markets and try to encourage them to come to school,” he said. “But it’s not easy to change domestic norms. Families value the work they do.”