Authorities in Madagascar are struggling to respond to increasingly severe flooding in the central highlands region of the country that includes the capital, Antananarivo, in addition to a prolonged drought in the south.

The latest round of flooding, which started when three rivers that cross Antananarivo – the Sisaony, Ikopa and Imamba – burst their banks during a storm on 24 February, has left 19 people dead and an estimated 36,000 displaced, according to the National Office for the Management of Risks and Catastrophes (BNGRC in French). A further 40,000 people were displaced in 13 other districts.

On Wednesday, BNGRC issued a new alert warning that a low-pressure system just off the island’s west coast was expected to bring more torrential rainfall to the central highlands region. Several neighbourhoods in Antananarivo remain braced for further flooding and landslides over the coming days.

The current flooding adds to the many challenges already facing the city in the wake of Tropical Storm Chedza, which caused 68 deaths and almost 80,000 displacements across Madagascar - over 16,000 in Antananarivo alone - during the weekend of 17 January. In the aftermath, several of the city’s public spaces, such as sports stadia, have been providing temporary shelter for the displaced.

Antananarivo’s topography means the heavy rains have had varying impacts on different parts of the capital. While residents of lower lying areas like Soavina have had to contend with waist-high gushing waters, the city’s hillier areas have experienced landslides and significant infrastructural damage.

BNGRC has issued a warning for landslides in several locations. The agency’s staff have been going door-to-door warning residents in affected areas to examine their homes for cracks or other signs of damage. 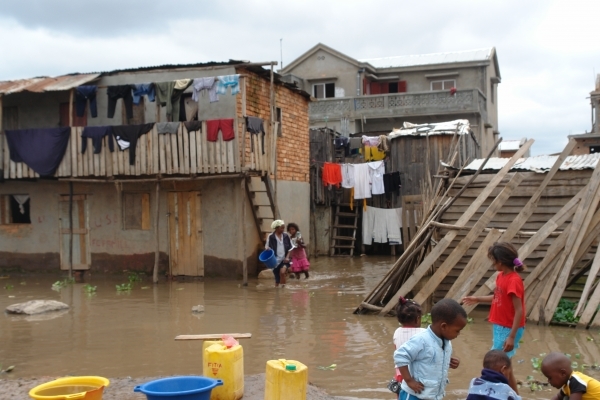 Many of the worst affected are the city’s poorest residents who violated city planning policy by constructing their houses in riverside areas prone to cyclical flooding during the high plateau’s December to April rainy season.

The National Assembly has organised a telethon to collect donations from members of the public while also asking for more support from the international community. City residents have also been mobilising to assist those affected by the flooding with various church groups calling for donations.

Meanwhile, southern areas of this vast Indian Ocean island have been enduring a protracted drought. The UN’s Office for the Coordination of Humanitarian Affairs (OCHA), which is supporting the national response, estimates that 80,000 people are in need of urgent food assistance. However, an additional US$3 to $4 million is needed to respond and the funding gap is expected to increase in the coming weeks.