What happens when you suddenly inject billions of dollars, hundreds of jobs and 500 aid agencies into to an isolated corner of the world battered by more than a quarter century of conflict and then devastated by one of the world’s worst natural disasters? IRIN looks back at some of the unintended and residual consequences of the international response in Indonesia’s Aceh Province to the Boxing Day tsunami of 2004.

Within two years of the tsunami, more than $6.2 billion was donated by some 70 countries and inter-governmental bodies to the overall response to the disaster. The aid, which ultimately reached $8 billion in the following years, was “of a volume and force probably unprecedented in the history of Indonesian development,” according to Edward Aspinall, a professor of politics at Australia National University and an Aceh expert.

“The impact of the influx of people and money into a war-time economy where relationships mattered more than productivity or outcomes was overlooked by many involved in the response,” Rina Meutia, who was a university student when the tsunami hit, told IRIN. Meutia joined the UN Office for the Coordination of Humanitarian Affairs (OCHA) and the World Bank in their relief and recovery efforts. She explained: “When the tsunami hit Aceh we had an increasingly hot war-time economy - violence, extortion, intimidation, and informal taxation and income generation. To pour billions of dollars into that situation changed everything.”

“The difference between Aceh and another developing country is that the deluge of money came as a shock - we were closed off to the outside world by Jakarta, then the response came all of the sudden - then ended,” she said.

Now, according to Julfikar (who like many Indonesians uses only one name) who runs an Acehnese human rights NGO coalition, “It’s almost as if we need another emergency – but this time to stimulate the local economy. It was a shock to the system to see so much aid in a very short time, and then the agencies just packed up and left.”

He argued: “We were left with nice infrastructure after the humanitarian response, but honestly we were also left with an addiction to aid money. The government has taken this on, too – operating with a charitable mindset, not a development mindset.”

“If you spoke any English you were immediately recruited by the INGOs,” recounted Meutia, who coordinated a session on disaster response in conflict zones at a World Humanitarian Summit preparation meeting in Japan this year. “One day I showed up to the office and the new driver was one of my university lecturers. All of the sudden this man I had been studying under was my subordinate,” she said. “It was a shock, but he was making such a good salary at the time that he didn’t really care – no one did.”

Acehnese NGOs felt an immediate impact in human resource demands with the arrival of hundreds of aid agencies. Hermanto Hasan, who worked with the People’s Crisis Centre (PCC), a local NGO helping conflict-affected people, told IRIN: “PCC ran on volunteers. Then the INGOs came in and we learned that so-called UN volunteers got a salary of US$2,000 per month.”

Hasan saw his networks decimated: “Within two months none of my usual volunteers were available to do even basic things like food distribution.” And recipient attitudes changed as well: “Once tsunami aid programmes began, you would ask people to get together for a meeting and they [would] ask whether you will be paying for their transportation or not.” He said: “After the tsunami, you could write a proposal with a pencil on a napkin and you would get funding, it was coming from everywhere.”

Years into the recovery and reconstruction effort, as operations began to wind down from an unprecedented aid rush, the precipitous plunge in available funds left the local economy shocked.

“There was deep denial that the emergency economy was over,” said Meutia. “By the time the INGOs left, the students they had recruited had a hard time going back to school. It had been five years of humanitarian work with good salaries and exciting outcomes, so going back to the classroom with a new generation of students next to us was strange,” she explained. “We also, many of us, felt that a degree was unnecessary because we had just had such amazing jobs in the response phase.”

“Before the tsunami we supplied fishing supplies on a revolving loan basis - based on the money coming back from each loan then going out to someone new,” explained Bustamam, who uses one name, the president of an association of fishermen in Banda Aceh. He proudly pointed to a 100 percent pay-back rate on the loans. “After the tsunami, everything changed because all of a sudden it was all free.”

Others continue to lament that aid interventions changed local dynamics. Said one village leader: “It’s not that we didn’t want or need the help, but we didn’t expect the change it would cause.” He explained: “We didn’t expect that 10 years later, when a tree fell down and needed to be cleared, we wouldn’t be able to get volunteers from the village because they expected cash-for-work.”

Meutia argued that the aid influx “changed the market for beneficiaries,” highlighting that Jakarta’s limiting foreign access to Aceh for many years preceding the tsunami made the province uniquely isolated. “The difference between Aceh and another developing country is that the deluge of money came as a shock - we were closed off to the outside world by Jakarta, then the response came all of the sudden - then ended,” she said.

Meutia described a World Bank project implemented after 2009. “We offered participants $50 for an activity that had community benefits. It was calculated as a fair wage given the local economic conditions. But the people told us: ‘During the tsunami time, we would get $300 for that amount of work, so we won’t do it now.’”

The economics of newfound peace

Some aid groups’ poor understanding of the war-time economy, including the multiple new streams of cash, didn’t help interventions. According to Patrick Barron, who worked for the World Bank at the time, “The failure to link - even partially - the reintegration programme to tsunami reconstruction and broader development efforts left key post-war issues unresolved and, moreover, exacerbated inequality in Aceh.”

“When the tsunami NGOs arrived, they evaluated our village and said the people were farmers. But that’s not entirely true,” explained the elected leader of a village in Indra Jaya sub-district on Aceh’s west coast who asked not to be named. He explained that while the village had some farms, only a minority of residents were active farmers: “The income here was earned from illegal logging. Not many knew how to farm.”

Some, especially in urban areas such as Banda Aceh, took advantage of the aid rush to start businesses. Waktar, a shop owner in Banda Aceh said the crisis response phrase boosted Acehnese confidence. “For private citizens, the hopes and dreams changed when there was a lot of money,” he said. “Some people took out loans to open restaurants, and five years later they were bankrupt because the humanitarians were gone and the grants were gone, so everyone went back to eating at home.”

A rescue vehicle itself in need of rescue after the tsunami hit Meulaboh, West Aceh (File photo 2004) 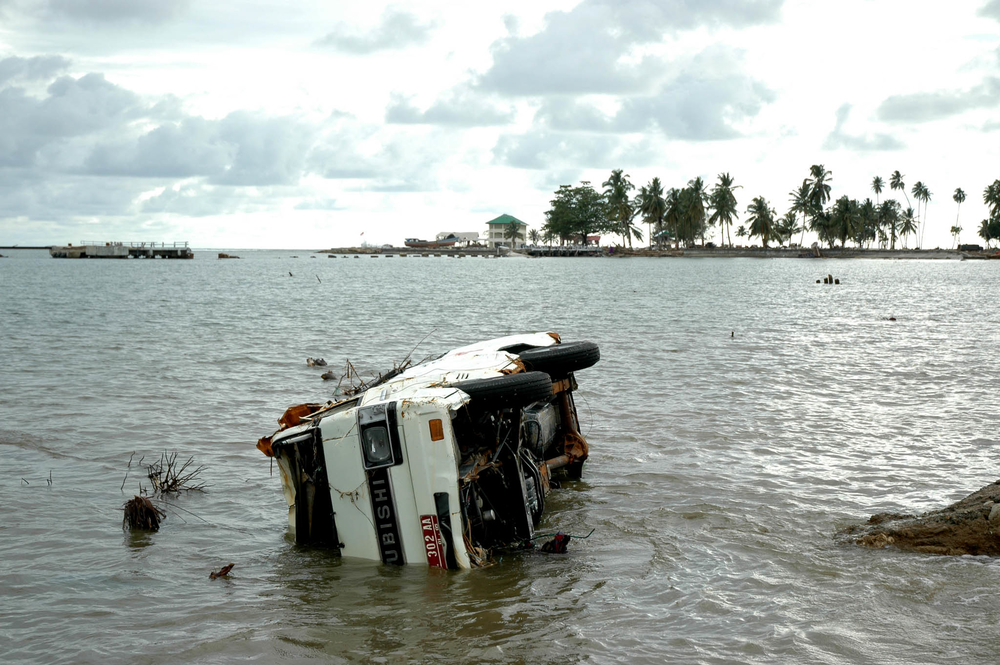 But after being buffeted by decades of war and political foment, and amid a deluge of relief and reconstruction projects alongside newfound peace, Acehnese civilians struggled to make sense of emerging economic and political power structures.

As part of the peace agreement that ended nearly three decades of hostilities between the Indonesian army (TNI) and the Free Aceh Movement (GAM), many GAM affiliates were slotted into rehabilitation programmes, which became almost immediately controversial as they involved the distribution of funds to ex-combatants.

But with combatant reintegration funding dwarfed by both tsunami aid and new provincial development funding from Jakarta, and GAM enjoying considerable political clout, ex-combatants were able to access the other pools of funding. Aspinall noted: “Only the reintegration funds were specifically designed to smooth the transition of former fighters into civilian life and help them to support themselves economically. However… they turned out to be the least significant in terms of their quantity.”

Aspinall, who also volunteered in the tsunami response, argued that even with their lack of professional skills, GAM members were able to gain economic ground by winning (mostly government) reconstruction contracts because they possessed two important resources: “political influence and a capacity for intimidation and violence - [both of which] were established ingredients of economic success in Aceh, as in other provinces in Indonesia.”

“When money, whether it was from the tsunami or the war response, came in for contracts or NGOs, a lot of the same war-time issues like taxation and extortion continued, so GAM gained powerful positions.”

Over time, he explained, as GAM leaders were elected into provincial office, public political literacy struggled to catch up: “Now we had guerilla rebels in political positions. A lot of people didn’t know how to think about that - they didn’t know that it was different and that these leaders were public officials now with accountability. Just now people are growing upset.”