Julie Francis's self-imposed curfew starts when the sun sets. The widowed mother of four has been living at the UN base outside Malakal since December, one of more than 17,000 people who have fled there to escape episodic fighting in South Sudan's Upper Nile State capital. But the overcrowded camp is not without its own dangers, especially for women and girls.

Francis can hear drunken teenagers hound women as they make their way around the site's darkened paths. She has seen the holes men have cut through the tarpaulin walls of the showers so they can peep and leer at women. She has comforted rape survivors.

"It is too much," she said. "They attack us at the place of the toilets or at night where we collect water." There were 28 reported cases of sexual assault in the Malakal camp between January and June of this year, according to an assessment released by the inter-agency Global Protection Cluster late last month. But aid workers acknowledge the vast majority of attacks probably go unreported.

So Francis has decided it is best to push a bedframe in front of the entrance to her tent as soon as it gets dark. If she or her daughters need to go to the bathroom, they just use a bag.

But she doesn't think it is fair. "People should take this seriously," she said. "They should be serious to help. There are still people who need to know that it is not right to rape."

Where, she wants to know, are the floodlights that could roust deter men hiding near the latrines, or the regular UN Police (UNPOL) patrols to protect women who want to visit their friends at night or go to the bathroom? Why, she asked, does it seem like she is the only one taking steps to make sure she does not get raped?

The problem is not in Malakal alone. Since fighting broke out in South Sudan in mid-December, nearly 100,000 people have crowded into 10 UN Mission in South Sudan (UNMISS) bases across the eastern half of the country. They have been dubbed "Protection of Civilian" or PoC, sites. Though there are no official statistics, humanitarian groups say sexual and gender-based violence (SGBV) - including rape, but also beating, harassment and domestic violence - exists in varying degrees at all of the larger camps, as does a growing resentment among women and girls that more is not being done to protect them.

"Of course there's increasing frustration," said Nana Ndeda, the advocacy and policy manager for Care International. She has been talking to women living in the camps about their experiences since the conflict started. "They're getting very frustrated by the fact that UNMISS is not able to provide the kind of security that they would want provided."

What is most galling, she said, is that the strategies for what should be done already exist. The 87-page Guidelines for Gender-Based Violence Interventions in Humanitarian Settings, compiled by a committee of UN agencies and humanitarian groups, offers detailed recommendations, including lighting communal areas, creating safe spaces where women can confidentially seek help and consistently soliciting the input of women and girls on how to improve the situation.

But in the early days of the conflict, with unprecedented numbers of civilians seeking shelter at the UN bases and scores of humanitarian workers evacuating, UNMISS employees were scrambling just to provide basic services.

"We had many more people than we could house and we needed to find a way to still be able to operate the base, as well," said Derk Segaar, who heads UNMISS's protection team. In the early days of the conflict, as people flooded into bases across the country, "it was a matter of trying to get them in a sustainable space that would allow just enough space for them to be there."

Thousands of people are still living in shelters hastily constructed in the early days of the fighting, when issues like SGBV took a backseat to rescuing as many people as possible.

Tidial Chany is a community leader elected to represent one of the original parts of the Malakal camp, known as PoC 2. He works closely with UNPOL on security concerns in his area, but said it is nearly impossible to monitor all of the boggy, unlit alleys and has ultimately concluded, "It's no good for security within the PoC."

Aware of the problems, UNMISS started working to secure additional land and to construct more strategically planned sites almost from the beginning of the conflict, Segaar said, but their efforts were slowed by both bureaucracy and continued fighting.

New camps finally opened in Juba and Malakal in June. Within the new spaces, attention has been paid to the guidelines: women's latrines are stationed near well-lit arteries and are separated from the men's, for instance. Another site is slated to open in the Jonglei State capital, Bor, later this month.

"It's not a matter of a few weeks or a few months and people will all be happy to go home," Segaar said. "That's why we built these bases. We need to be able to keep people safe and healthy for potentially a much longer period of time."

But, at least in Malakal, there is still not enough space in the new site for all of the displaced. When more people surged into the base on rumours of another attack last month, they had to take refuge in the same shelters people had recently left. In Bentiu, currently the largest displacement site with more than 47,000 people, ongoing rains have made it impossible to start work on a new PoC.

That has shifted the focus back to implementing other, more basic interventions to stop SGBV. And while the Mission works closely with aid groups, issues including lighting and latrine location are "a very clear humanitarian responsibility", Segaar said.

Vehicles set ablaze during fighting between government forces and rebel fighters in the town of Malakal, South Sudan 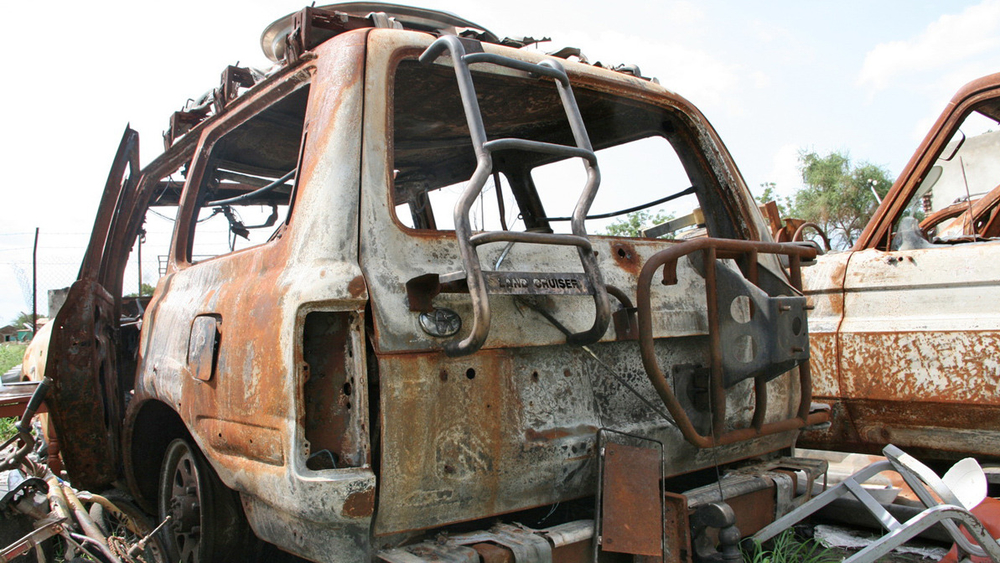 Ndeda said aid groups are constrained by the space issues - especially in Bentiu, where "really you cannot fit in one more tent." That means they cannot create permanent safe spaces for women. Instead, they have turned to temporary options, taking advantage of empty rooms in health clinics to hold temporary counselling sessions.

But she also acknowledged that, in her experience, it has been difficult to find the funds needed for interventions like improving latrines and shower blocks. "Very few people were coming out saying they want to provide lighting facilities," she said.

That is starting to change as more people become aware of the gaps. Oxfam, for instance, is providing 6,400 solar lamps to people in Malakal, which will make it safer for women to go to the bathroom at night.

After nearly nine months, Ndeda said it is past time for UNMISS, aid agencies and camp leaders to figure out how to shore up their protection efforts. As peace talks between the government and rebels led by former vice-president Riek Machar continue to sputter in the Ethiopian capital, Addis Ababa, she warned, "there's no end in sight to the PoC world." And even if all of the camps are overhauled, security is going to remain a problem.

UNMISS has roughly 1,300 police officers - including Formed Police Units, who are specially trained to deal with crowd control - deployed across all of the sites. That is up from the 900 UNPOL originally assigned to the mission three years ago. But Segaar said by the time they assign officers across all of the camps and then further split them into three different shifts, only a handful are actually patrolling at any given time.

"I would say that's the biggest constraint we have," he said.

At the same time, the social structures that could have offered women some protection have broken down. "Many of the protective mechanisms that might have been in place before are not in place now," said Lea Krivchenia, a senior programme manager with Nonviolent Peaceforce, a non-profit helping protect and engage women in some of the camps, as well as rural areas. That includes community meetings and traditional justice systems, which have been difficult to re-establish in the crowded camp environment.

Rachel Nayik, has lived at the Malakal base since February. The former secondary school teacher now organizes weekly women's meetings in the camp. She blames most of the SGBV on young men who have been traumatized by the violence that started in mid-December. She said their experiences have made them aggressive, which is then fuelled by the alcohol they turn to to relieve the enforced idleness of camp life. "The traditions here don't allow rape," she said. "It is only because of the war that it is becoming rampant."

As SGBV continues, she told IRIN that women are worried that the attacks have become part of the fabric of camp life. So in the absence of more UNPOL patrols or redesigned camps, she said women living in the camp are willing to take on the task of protecting themselves.

But they want better options than shoving a bedframe in front of their doors or going to the bathroom in a bag.

Surendra Kumar Sharma heard the same thing during assessment he helped organize in one of the Juba camps a few months ago. Sharma, the chief technical adviser for the UN Development Programme (UNDP), had some money available for a pilot project to improve conditions in the camp. So he asked the communities how UNDP could help.

"Security was absolutely one of the major issues which was of concern to everybody, especially for the women and children," he said. Community within the base had already organized themselves into community watch groups, but were looking for assistance to more effectively canvass the camp and prevent crime - especially SGBV.

Together with UNPOL, UNDP put together a week-long training on the basics of how to effectively monitor the camp and deal with SGBV. They have been on the beat for nearly a month now. Sharma said it is too early to tell if crime has come down, but he is hopeful.

The community watch groups fit the need to "find a solution to this problem within the existing parameters," Sharma said. He said they would happily export the training to other camps if they can get funding for it. "If a solution comes from within, if they want to do something themselves, and we support them in that, I think it's more likely to be sustainable."