A key drawback of the deal is the exclusion of important stakeholders.

The Comprehensive Agreement on the Bangsamoro (CAB) envisages the creation of a new autonomous region covering a chunk of southwestern Mindanao as well as numerous islands further southwest. The proposed region is broadly similar to the current Autonomous Region of Muslim Mindanao (ARRM) which it will replace.

“We ask them to listen to the plea of their own brothers and sisters to give peace a chance,” the government's chief peace negotiator, Miriam Coronel-Ferrer, said in an official communiqué in January.

According to a recent UN report evaluating progress in building lasting peace in countries emerging from conflict since 2010, “exclusion is one of the most important factors that trigger a relapse into conflict… Almost all cases that have avoided such a relapse have had inclusive political settlements, achieved either through a peace agreement and subsequent processes or because of inclusive behavior by the party that prevailed in the conflict.”

Inclusion in a peace process for all groups affected by a conflict, and in the future governance of a country, is an important tool in ending conflicts, said a recent policy brief on the current situation in South Sudan.

Inclusivity is just one of a number of challenges: Many details of the CAB are not yet being openly discussed.

Pacific Strategies' Williams says that while the peace deal - if signed - is a step in the right direction, there remains "a greater law and order challenge to be addressed before meaningful peace is achieved".

BIFF and other armed groups would continue to "play agitators", potentially destabilizing Mindanao over the near term, he said.

Maguindanao, Philippines - Army troops en route to a combat patrol in Maguindanao Province, southern Philippines. Thousands of people have been displaced by the ongoing conflict in Mindanao 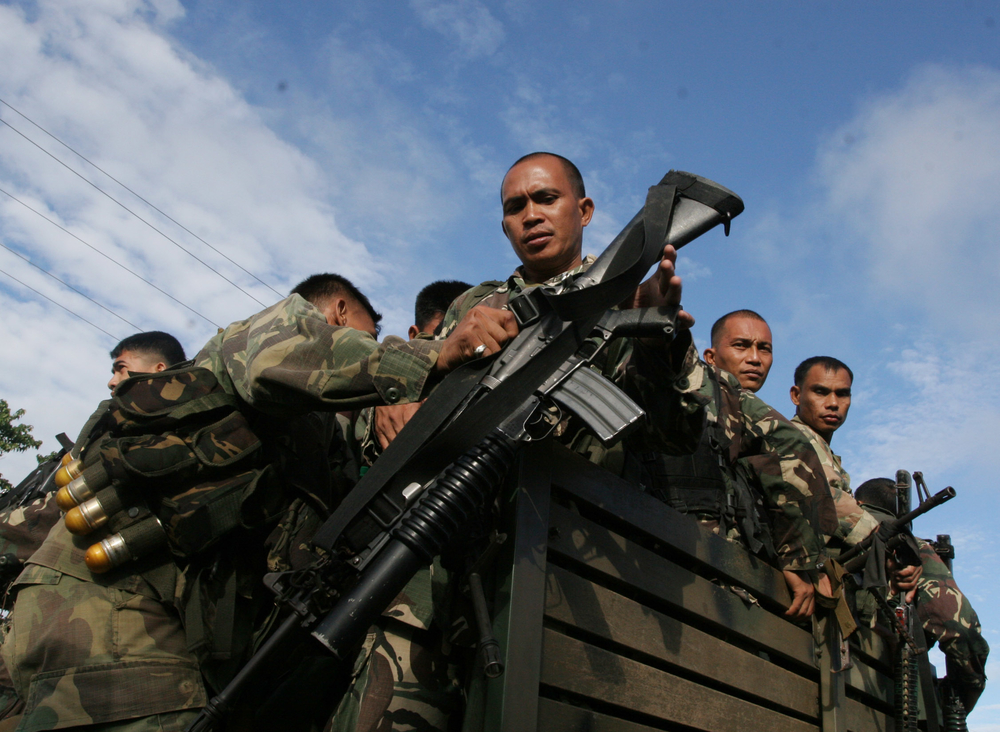 It [the disarmament] will be gradual and “commensurate” with other steps, said Jaafar in a recent interview.

And then there is the idea that some of these same fighters will somehow be integrated into the ranks of the armed forces or the police - a goal not yet fully explained.

Getting CAB signed is only the first of a number of steps before the deal can be implemented.

If and when CAB is signed, President Aquino, who had promised to end the decades-long insurgency by the time his six-year term ends in 2016, must marshal his party members in Congress to pass the Bangsamoro Basic Law (which lays down among other things the structure of the government of Bangsamoro, the relationship of Bangsamoro with the central government, and the rights of residents).

A referendum would then follow on the areas to be included in the autonomous region, a potentially politically sensitive issue given the presence of local warlords who may not want to come under Muslim rule.

In terms of governance, the plan is for the region to be ruled as an autonomous state with its own parliament elected by local residents.

"Political challenges will come from traditional, local politicians who view the change of the status quo could affect their standing in the region," said Rommel Banlaoi, who heads the Philippine Institute for Peace, Violence and Terrorism Research which has been closely following the talks.

"If their interests are threatened they can undermine the peace process and hijack the political agenda of the proposed autonomy," he warned.

"Implementation won't be easy… That is to be expected in a complex situation with many stakeholders who have to be brought together, and whose respective interests have to be addressed," Coronel-Ferrer conceded.

"As I have said before, things would still get worse before they become decisively better," she said. "There will be ups and downs, eruptions of some kind of violence that cast doubts on the viability of the process. But we cannot be disheartened. We're on our toes. We cannot be derailed by these peddlars of violence," she stressed, referring to splinter groups that have vowed to sabotage the deal.

A recipe for more violence?

The Muslim rebellion began in the early 1970s led by the MNLF, and has left large parts of mineral rich Mindanao mired in poverty. Investors shied away, and millions have been displaced over the years.

Children live under the barrel of a gun literally as they await food rations at an evacuation camp in Pikit, North Cotabato Province. 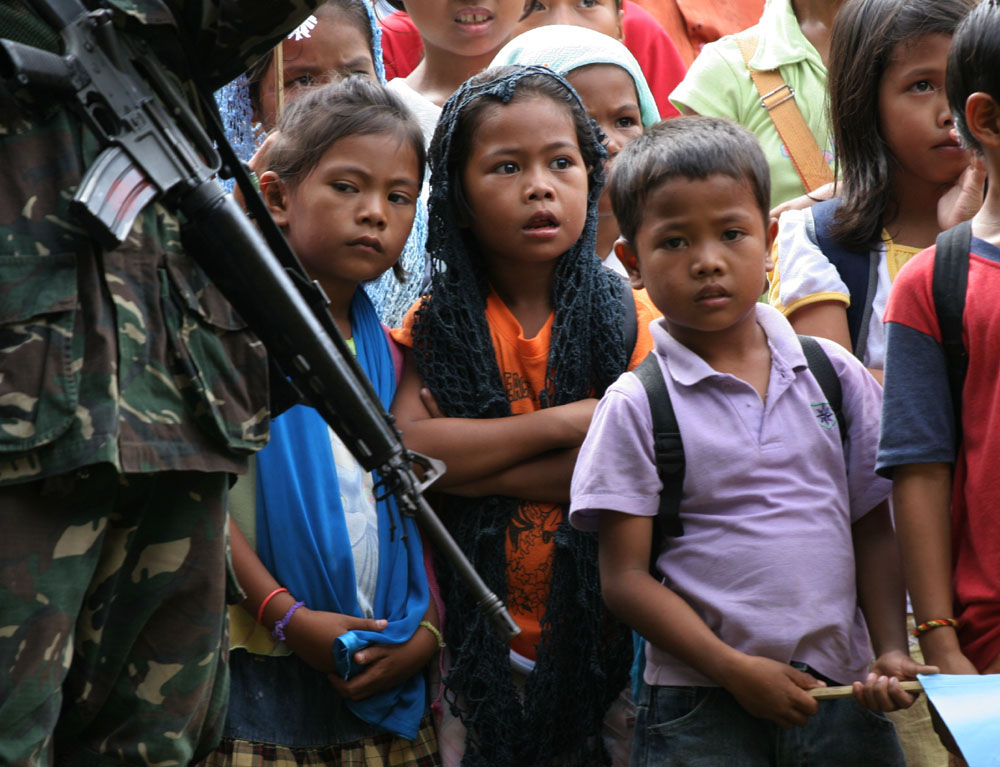 "The government is conscious that the process should lead to empowerment, not short-term appeasement based on patronage," Coronel-Ferrer said. "There is that awareness that the peace dividends must reach everyone, and if not allocated justly, could in fact lead to dissension in their ranks."

Banlaoi of the Philippine Institute for Peace, Violence and Terrorism Research warns that violence could erupt if the deal does not produce concrete economic results. “Armed oligarchs" who had traditionally profited from lawlessness in the south posed a danger to the peace talks, and will sow chaos if the promised economic incentives from the deal do not take root, he said.

Various estimates say Mindanao is believed to have a large chunk of the nation’s estimated US$840 billion in gold, copper and other mineral reserves. It also has vast fertile fields that remained uncultivated because of the conflict.

"If the proposed Bangsamoro government becomes weak and fails to deliver on its promises, it could be a recipe for more violence," Banlaoi said, noting that an immediate threat could come from BIFF or the followers of MNLF's Misuari.

In September, Misuari's group launched a daring, three-week siege of the port city of Zamboanga, leaving thousands displaced and over 200 dead; and more than 10,000 people were also displaced when the military in January 2014 launched a targeted assault on BIFF positions, an event that was hailed at the time in the pro-government media as the virtual annihilation of BIFF.

"They [BIFF] still have access to small arms and light weapons and they can still make trouble," Banlaoi noted. "The challenge now is how to tame these groups and effectively convince them that they have more to gain than in waging armed struggle."

MILF's Jaafar says the rebel leadership is prepared to share the fruits of peace, but “we will not tolerate any armed attacks from them [splinter groups] and threats to destabilize our work."

Coronel-Ferrer said BIFF was known to harbour foreign jihadists and terrorists. The military, she said, will continue to go after BIFF remnants to "force them to remain dispersed and unable to establish any significant foothold" in one place.