Aid workers are struggling to provide assistance to more than 100,000 people displaced by fighting in Mindanao, a crisis that could undermine Philippine President Benigno Aquino's efforts to bring peace to the country’s turbulent south.

“There are reports that some of the evacuation centres are overcrowded, and there are serious WASH [water, sanitation and hygiene] concerns, as well as access issues to non-food items," confirmed David Carden, head of office for the UN Office for the Coordination of Humanitarian Affairs (OCHA) in the Philippines. “We need to ensure that sufficient assistance is available to all those affected.”

According to the National Disaster Risk Reduction and Management Council (NDRRMC), as the crisis entered its 10th day on 18 September, the number of displaced in the city of Zamboanga and Basilan Province has swelled to 109,686, with humanitarian agencies calling on both sides to protect civilians and aid workers on the front lines.

Thirty-seven percent of the city’s population is now displaced, the International Organization for Migration reported on 17 September.

Of the displaced, some 95,000 are now staying in more than 30 evacuation centres, including the city's main sports stadium, where lack of water and toilets is quickly becoming a concern, aid workers say. Over 50,000 people at the Joaquin Enriquez Sports Complex are now sharing 33 portable toilets, a dire situation that could pose health and sanitation problems soon.

The rest of the displaced are staying with their families or friends, but remain vulnerable from desperate Moro National Liberation Front (MNLF) rebels now fleeing the assault.

At the same time, residents living along coastal areas were staying in small boats anchored near the sea, only venturing inland to seek relief goods.

"We are just in the evacuation phase. The more challenging part is when they return to their destroyed communities and start to rehabilitate and rebuild," Social Welfare Secretary Corazon Soliman, who is supervising relief work in Zamboanga, told IRIN.

The crisis began on 9 September, when hundreds of MNLF rebels seeking to hoist their independence flag at the Zamboanga city hall seized control of six heavily populated coastal villages. 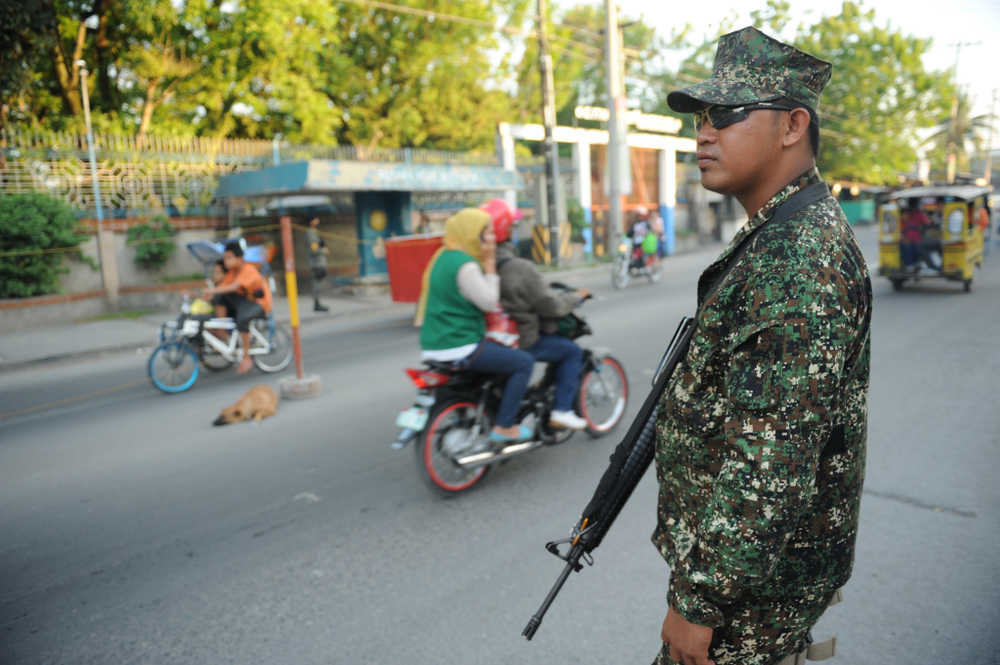 Although there are reports that food stocks are sufficient to meet the current needs in the evacuation centres, the sudden influx of displaced is posing challenges in food distribution due to a lack of personnel and equipment, OCHA reported on 17 September.

Food supplies have been bolstered by local businesses helping to provide tens of thousands of food packs, and the Philippines Department of Social Welfare and Development (DSWD) has deployed health workers to help counsel the evacuees, many of whom were distressed after seeing their loved ones hurt or their homes burned down.

"Many are angry and are asking when this would end," said regional civil defence official Adriano Fuego, describing the situation as “tense”.

“They [evacuees] are helpless at the moment... Even if they want to flee the city, the airport is closed," he said.

The rebels razed entire communities and took dozens of hostages, whom they used as human shields. Many were trapped in their homes amid the crossfire, while the Philippine Red Cross temporarily suspended its operations in some areas after 10 of its staff and volunteers were injured.

“Since the fighting began, our Red Cross staff and volunteers are risking their lives and working around the clock to assist people displaced by the stand-off in Zamboanga,” Philippine Red Cross Secretary General Gwendolyn Pang said on 15 September.

Troops intensified their campaign on the fifth day of the crisis, deploying two attack helicopters that fired rockets toward enemy positions, allowing ground forces to significantly retake ground from the rebels. But the MNLF rebels have continued to engage in heavy sporadic fighting, using snipers and mortar fire to slow the advance.

Over the past two days, some 149 hostages have either been rescued or managed to escape to safety, where they were tearfully reunited with their families.

Air and ferry services and schools have been suspended for days, but shops and banks have slowly begun to reopen in Zamboanga, a major port city on southern Mindanao Island, which previously voted against joining an autonomous region once under the control of the MNLF.

Residents who fled a raging battle between the Moro National Liberation Front (MNLF) and government forces camp out near the shoreline. As of 18 September, 10 days of fighting has left over 100,000 displaced and dozens killed 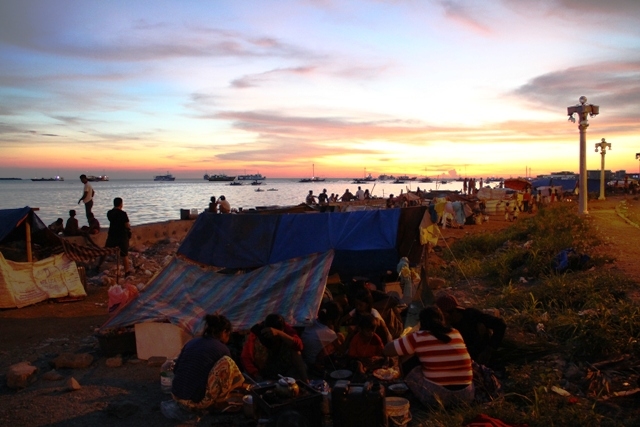 Meanwhile, questions remain as to the fallout this will have on the ongoing peace process.

Nur Misuari founded the MNLF in the early 1970s to fight for an independent Islamic state in the south, which local Muslims consider their ancestral home. The long-running insurgency has led to a proliferation of other armed gangs and a black market of unlicensed guns that contribute to the region’s instability.

Over 150,000 have reportedly died in the decades-long conflict. In 1996, however, Misuari signed a peace pact with Manila, ending his bid for independence in favour of the creation of an autonomous region, where he subsequently became governor. But the government later called the region a "failed experiment", in which Misuari's autonomous regime squandered millions of dollars in aid and failed to improve the lives of Muslims.

The siege has led to significant economic losses, and is now undermining President Benigno Aquino's aim to put an end to cycle of violence by the time he ends his term in 2016.

"The Zamboanga city crisis must end in order to prevent further loss of innocent lives and avert more damaging ramifications to the region's economy," said Luwalhati Antonio, head of the Mindanao Development Authority and an Aquino aide. "We are currently assisting in the process of assessing the full extent of the damage, as well as the quantifiable impact to the region's economy, in order to determine immediate recommendations for post-conflict rehabilitation.”

But the crisis appears to be far from over, with the military saying they expect the rebels to continue putting up a fight. At the same time, aid workers predict that, even when the conflict is over, the humanitarian consequences will last for quite some time.

"We will continue to press forward in this calibrated military response. As to when this would end, we can't give you a specific time frame other than to say we hope to finish this as soon as we can," military spokesman Lt-Col Ramon Zagala said.

According to the Philippine Army, the death toll now stands at 97, which includes 78 MNLF fighters, 12 security forces and seven civilians, with dozens wounded on both sides.