Southeast Asia is slowly embracing harm reduction in an effort to curb illicit drug use and HIV/AIDS, but huge obstacles remain, experts say.

“There's rhetorical acceptance of harm reduction in many Southeast Asian countries, although it remains at the fringe of national anti-drugs policies,” Joe Amon, director of the health and human rights division at Human Rights Watch, told IRIN.

Almost all countries in the region now have some form of harm reduction, a strategy to prevent dangers associated with drug use. However, many programmes lack government funding, are ill-equipped to meet demand, or fail to comply with UN standards.

Moreover, authorities then herd thousands of drug users into compulsory treatment centres, ignoring evidence-based approaches, and despite a joint UN statement in 2012 calling for the closure of such centres, which are deemed costly with high relapse rates and a threat to detainee health and human rights.

While most countries allow key harm reduction strategies, such as needle and syringe exchange programmes (NSPs) and opioid substitution therapy (OST), a harsh “war on drugs” method often prevails as the Association of Southeast Asian Nations (ASEAN), a 10-member economic bloc, struggles with the “unrealistic hope” of a drug-free region by 2015, Amon said.

The UN General Assembly passed HIV/AIDS targets in 2011, including a 50-percent drop in HIV transmission among IDUs in four years. A comprehensive package was also set up to guide nations to treat drug users with nine interventions such as NSP, OST, antiretroviral therapy (ART), blood tests, counselling and others, backed by scientific evidence.

To date, not a single Southeast Asian nation has been able to implement the entire package, although it is uncommon for any country to do so, according to UN officials.

“The key policymakers aren't convinced enough about the effectiveness of harm reduction services,” Bijay Pandey, chairperson of the Asian Network of People who Use Drugs, explained, noting a lack of political will and a push for drug abstinence often shapes government responses.

According to Harm Reduction International, a global NGO, more than 570,000 IDUs live across Southeast Asia. More than half of them come from Indonesia, Thailand and Vietnam, which are listed by the UN as high priority with major HIV epidemics in IDU populations.

IRIN looked at each country to better discern where they stand.

In late 2011, the Thai government issued a new drug control strategy to end the nation’s spread of drug abuse by focusing on the prevention of drug use and recidivism.

The following year, at least 400,000 drug users - many of whom inject drugs - were put into government treatment centres run by the military. In 2013, another 300,000 people are expected to go through the system, which previously saw roughly 100,000 patients annually. About half of the patients are forced into the centres, Thai government officials said.

“We want to give them a second chance to be a positive part of the community,” Sukhum Opasniputh, deputy secretary-general of Thailand’s Office of the Narcotics Control Board (ONCB), told IRIN.

However, heightened focus on drug crime has resulted in 297,000 drug-related arrests in the past nine months, Opasniputh said. Previous drug efforts had much fewer arrests, but still staggering tallies, with almost 250,000 in 2011 and about 208,000 the year before that, according to the UN Office on Drugs and Crime (UNODC).

Those determined to be drug addicts can be sentenced to compulsory centres for up to six months, and this can be extended for a total of two years if no progress is made, said Supodjanee Chutidamrong, a policy analyst with ONCB.

Chutidamrong expects a relapse rate of 40 percent in the recent round of patients, who are given several follow-ups after treatment. “We need 100 percent but it’s impossible,” she conceded, noting that the cost of a patient is about US$160 per month, excluding other expenses such as personnel wages and infrastructure.

In 2012, the UN and Thailand’s ministries of health and justice agreed that the centres were ineffective at reducing drug dependency and lacked proper health care. Officials recommended greater harm reduction services, but discussions with policymakers remain ongoing.

One proposal under consideration was for a bigger presence of NSPs, currently not funded by the government. Pascal Tanguay, director of Thailand’s office of international NGO Population Services International, said his team and other partners hand out safe injection kits at 19 drop-in centres to 4,000 people each year.

Thailand’s national drug policy, however, often undermines the programme, meant to prevent the spread of HIV and other blood-borne diseases - with police sometimes staking out drop-in centres and arresting clients. “There’s clearly a push to criminalize drug users,” Tanguay said.

Indonesia, which has about 380,000 people living with HIV, has suffered one of the fastest spreading HIV epidemics in the region. From 2006 to 2011, there was a 10-fold increase in the number of reported HIV cases, the country’s National AIDS Commission (NAC) reported.

Fuelling the climb is the alarming 36 percent of IDUs with the virus, by far the region’s worst percentage, but still better than the 2009 prevalence rate of nearly 50 percent.

To contain the virus, government officials have fast-tracked harm reduction policies. Since 2010, at least eight national regulations were passed to support measures. Total spending on AIDS also gradually swelled from $56 million in 2006 to $69 million in 2010, the NAC report said.

Still, there are concerns that measures and funding are not keeping up with the demand.

From 1998 to 2011, the country’s NSP ballooned from one to 194 sites. But, only a quarter of IDUs have access to the sites each year, below the recommended coverage of 60 percent.

At the same time, opioid substitution has grown over the past decade to 77 clinics in 2012. Yet again, less than 3 percent of IDUs have access to the therapy when at least 40 percent should be covered, according to a 2013 International Drug Policy Consortium (IDPC) report.

Preparing a tranquilizer-type substance for injection with a safe injection kit. There are more than 40,000 IDUs in Thailand 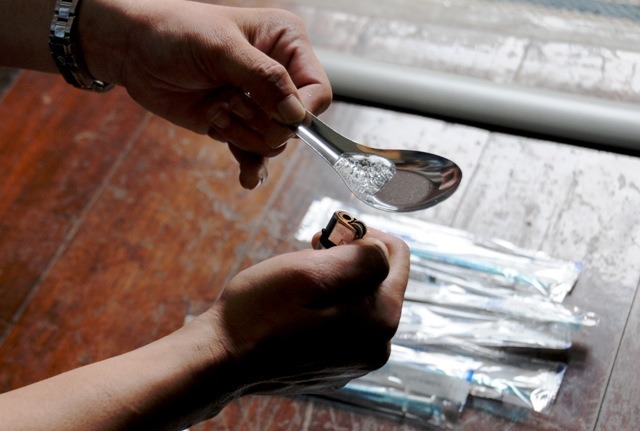 “Quantity above quality,” David Gordon, director of the YAKITA Foundation, a network of Indonesian non-profit drug rehab centres, told IRIN. “The results of the programmes are based on numbers accessing the services rather than any change in the quality of life of the addict.”

In its drug war, Jakarta passed Narcotics Law #35 in 2009, paving the way for drug offenders to be diverted into compulsory treatment centres. It is even mandatory for drug users to report themselves to the centres. Failure to do so can lead to a $200 fine or six months in prison, while families of drug users are also legally bound for not registering them and can be fined or face three months locked away, according to a report from Community Action on Harm Reduction (CAHR).

Compulsory treatment can last for six months to one year, resulting in many drug users avoiding essential health services or hiding their addictions from families and friends, the IDPC report said.

Faced with challenges to reduce HIV in at-risk groups, such as IDUs and sex workers, in 2012, Hanoi issued a national strategy to prevent and control HIV/AIDS up to 2020. The strategy echoed earlier ones aimed at combating new infections, discrimination of infected people and AIDS-related deaths, according to the country’s latest AIDS response progress report.

Starting in 2001, harm reduction measures were implemented in a handful of areas with limited impact. Later, with more aid from the international community, the government was able to cast a wider net to stem the problem.

According to government officials, HIV rates have dropped, mainly due to harm reduction. In 2011, HIV prevalence among IDUs was 13 percent, down from 30 percent a decade before.

Today, most of the nation’s 58 provinces have harm reduction measures in place, including almost 300 NSP sites, condom distribution and community outreach activities for drug users, they said.

"For the past 20 years, we have focused mostly on sending drug addicts to rehabilitation centres,” he said in a recent local news report. “Now we can do much better in providing additional support to help them integrate with society.”

In the first half of 2012, drug treatment centres saw 16,000 patients, of which 9,400 were compulsory. MOLISA manages more than 120 compulsory centres, which generally have a “very high” relapse rate, a UNODC drug report said.

With roughly 85 percent of drug users on heroin, the government also expanded methadone therapy. In 2008, a pilot programme for methadone was ordered to cure addicts and offset HIV transmission from needle sharing. Four years later, the government approved a decree for more clinics.

Le Hoai Trung, Vietnam’s ambassador to the UN, lauded the efforts but warned that overlapping policies, scarce personnel, health facilities and equipment, along with limited resources for sustainable programmes could reverse progress, he said in a statement.

Major international donors to the Vietnamese HIV/AIDS campaign have already cut funds or plan to as a result of the nation’s economic progress and global financial concerns, the AIDS response progress report said.