For 10 months The New Humanitarian has been on the ground reporting as a surge in violence rips through West Africa. Here’s what we found.
More of this in-depth coverage
GENEVA

A surge in violence across West Africa’s Sahel has displaced hundreds of thousands of people and left thousands dead since January, as Islamist militants with links to al-Qaeda and so-called Islamic State extend their reach across the region at a time when they are losing ground in their Middle Eastern strongholds.

For the past 10 months, The New Humanitarian has been one of the few news organisations reporting consistently from the front lines on the civilian impact of the rapid rise in violence by the militants, who are based primarily in Burkina Faso, Mali, and Niger – three countries with shared borders and problems.

According to data from ACLED – a group that monitors and maps conflicts – civilian fatalities between November 2018 and March this year rose by an “alarming” 7,000 percent in Burkina Faso, 500 percent in Niger, and 300 percent in Mali, when compared to the same period the year before.

In early May, senior UN officials from all three countries warned that insecurity had “reached unprecedented levels”.

The situation has surprised many analysts and UN and government officials and is pushing an area already prone to droughts and floods to its limit, with 440,000 people forced from their homes by conflict in the past year alone.

Hundreds of thousands of people are now without access to education and healthcare as staff flee their posts; 1.8 million people are facing critical food insecurity.

"Many people affected by the violence were already facing serious difficulties,” said Mbaranga Gasarabwe, the UN resident coordinator in Mali. “For them it is a double disaster."

The militants’ increased presence has sparked a violent backlash by the region’s overstretched security forces and fuelled a growing number of explosive inter-communal conflicts among ethnic groups accused of either supporting or opposing the jihadists.

At the start of the year we highlighted the rise of militant groups in Africa as one of the 10 humanitarian crises to watch in 2019. Here’s a look at how they are now spreading violence and humanitarian needs across West Africa, drawn from our months of on-the-ground reporting.

Why is violence rising?

The violence has its roots in the activities of a number of local but globally oriented jihadist groups that have spent the past few years laying the groundwork for armed insurgencies and are now wreaking havoc across the Sahel – a semi-arid belt of land on the southern edge of the Sahara.

In 2012, the militants were largely contained to northern Mali, where they had joined forces with separatist Tuareg rebels to take over a number of strategic towns, including the fabled city of Timbuktu.

A French intervention in January 2013 dislodged them, but they regrouped and insurgencies have since spread into central Mali, northern, eastern and southwestern Burkina Faso and the Tahoua and Tillaberi regions of southwestern Niger.

“It is unprecedented,” the top UN official in Burkina Faso, Metsi Makhetha, told TNH recently. “The country has never had to deal with such massive displacement.”

The militancy’s rapid progress has been aided by the region’s vast desert areas and porous borders, a flow of firearms from nearby Libya, and weak – and often predatory – states that struggle to provide even basic social services: Burkina Faso, Mali, and Niger all rank among the 10 least developed countries in the world, according to the UN’s Human Development Index.

“People think the jihadists can offer them a better life than the state,” Mahamadou Savadogo, a Burkinabe researcher, told TNH.

In recent times their tactics have shifted from targeted assassinations of government officials, soldiers, and local leaders that oppose their vision of Islam, to indiscriminate attacks against civilians and entire villages.

The response from security forces has, by and large, made matters worse. Last year Malian troops were implicated in mass killings in the central Mopti region, while in northern Burkina Faso TNH has documented recent atrocities by military personnel, who are now killing three times as many civilians than jihadists. Affected communities describe being trapped between the state and jihadists. Both sides accuse them of collaborating with the other.

What is causing ethnic conflict?

Jihadist groups have recruited heavily from Fulani pastoralists, an ethnic group that suffers from social exclusion as well as government and development programmes that favour agriculturalists.

This has raised tensions with members of other ethnic groups who say they are targeted by the jihadists. In the absence of the state, some have turned to self-defence militias, who have indiscriminately attacked Fulani communities.

In January, attacks against Fulani villagers in northern Burkina Faso left more than 200 dead according to local civil society groups. In March, some 160 Fulani men, women, and children were killed in a single attack by an ethnic Dogon militia in central Mali. The violence is now being widely described as “ethnic cleansing”.

France’s counter-insurgency force in the Sahel – Operation Barkhane – has been accused of stoking communal tensions by backing two Mali-based militias, the MSA and GATIA, which have targeted Fulani herders during anti-jihadist operations in both Niger and Mali.

A string of recent attacks on churches by militants in Burkina Faso could also now test relations between the country’s majority Muslim and minority Christian religious groups.

Internal displacement has increased five-fold in the past year according to the UN, with 330,000 people uprooted and a further 100,000 people fleeing across borders.

In Mali, the number of people forced to flee tripled in 2018 and continues to rise, with 133,000 newly displaced since the beginning of the year, according to the Norwegian Refugee Council.

In Burkina Faso, 170,000 people have been uprooted, with more than 100,000 fleeing so far this year. In Niger’s Tillaberi and Tahoua regions, violence has forced more than 70,000 people from their homes.

How much worse could it get?

Conflicts are likely to escalate further through the year as militants expand their reach, ethnic militias proliferate, and communal divisions harden.

So far this month, 20 people have died after militants attacked four churches and a religious procession in northern Burkina Faso; at least 18 civilians have been killed by ethnic militias in central Mali; and jihadists killed 28 soldiers in western Niger – one of the deadliest attacks recorded in that area to date.

“People think the jihadists can offer them a better life than the state.”

Projections on future population displacement are hard to come by, but Daouda Djouma, an official at the UN's emergency aid coordination body, OCHA, has said more than 380,000 people could be uprooted in Burkina Faso alone by December.

How is the international community responding?

Efforts to stem the violence aren’t working. The UN has around 13,000 peacekeepers deployed in Mali, but attacks by jihadists mean the mission is now “more a target than an anchor of stability”, according to a recent assessment from the German Institute for International and Security Affairs.

The French have 4,000 troops in the region as part of Operation Barkhane; the US is building a $110 million drone base in Agadez, Niger; and five Sahelian states – Burkina Faso, Chad, Mali, Mauritania, and Niger – have united under the G5 Sahel joint force.

But analysts and aid groups say focusing on military solutions risks overlooking the social and political grievances enabling militants to take root within local communities. A recent study by the peacebuilding charity International Alert attributes the rise in violent extremism in the Sahel to weak states rather than religious ideology.

Which jihadist groups are involved?

The largest coalition of jihadist groups is known as Jama’at Nusrat ul-Islam wal-Muslimeen, or JNIM. It brings together al-Qaeda's Sahara franchise, AQIM, with a number of other militant groups. The coalition was formed in March 2017 and operates in Mali, Burkina Faso, and Niger.

A franchise of so-called Islamic State, known as Islamic State in the Greater Sahara or ISGS, has been active since 2015 and is also gaining ground despite recent pressure from French forces.

Jihadists, Militaries, and Militants: Who's Where 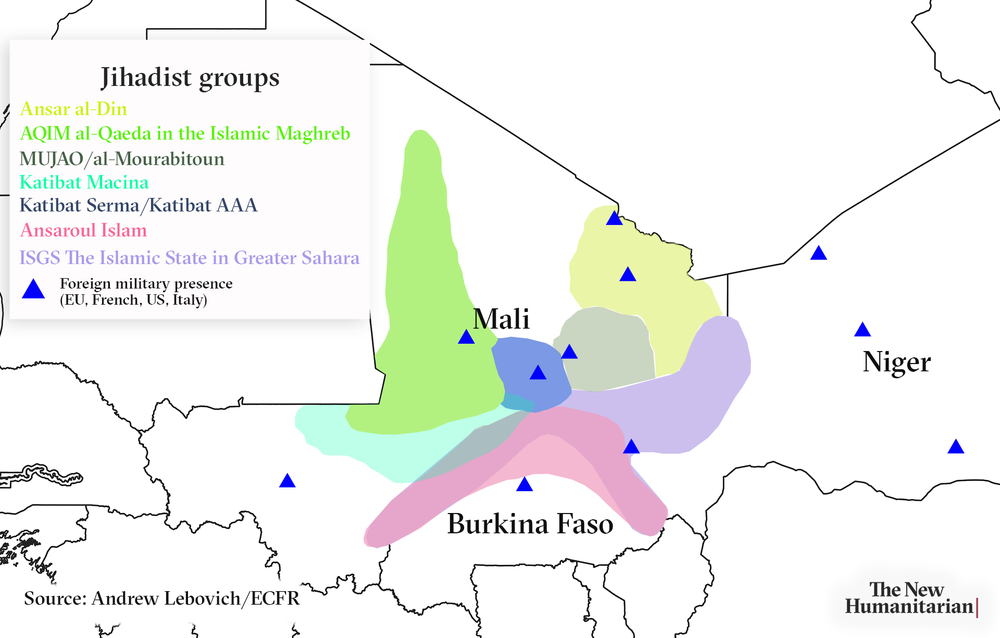 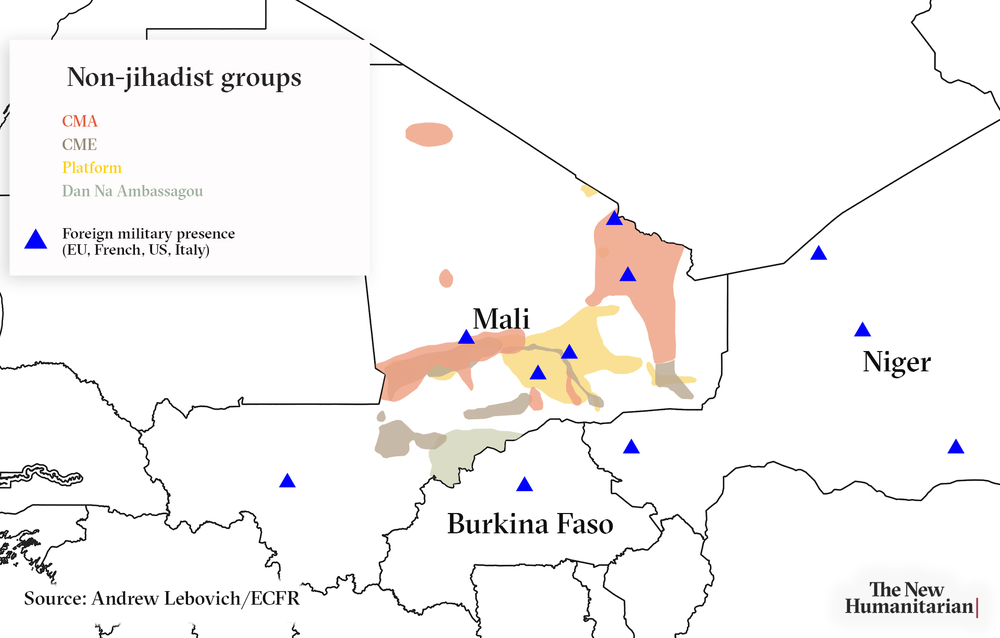 In his first video message in five years, the Islamic State leader, Abu Bakr al-Baghdadi, paid special tribute to ISGS fighters in Burkina Faso and Mali: “We congratulate them for their joining the convoy of the caliphate,” he said.

An assortment of homegrown militant groups – including Ansaroul Islam in northern Burkina Faso and Katiba Macina in central Mali – completes the picture. Their success is largely predicated on understanding the local grievances of different communities, in particular the Fulani.