Nearly a month after Iraqi Kurdistan’s non-binding vote of “yes” to independence, the borders of the would-be state have already shifted, alongside signs that Kurdish unity is not nearly as strong as the referendum’s architects hoped.

The front line for conflict and dissent has been the oil-rich province of Kirkuk, provoked by the Kurdish Regional Government’s decision to allow the population in disputed Iraqi territories (claimed by both the KRG and Iraq) to take part in the vote. However, the would-be war for Kirkuk turned out to be one neither side wanted to fight.

As Iraq announced its forces were coming for Kirkuk last week, Kurdish peshmerga soldiers peered over the tall concrete barricade walling off the disputed borders of Iraqi Kurdistan. They watched as thousands of Iraqi soldiers, tanks, and military hardware amassed on the other side of the narrow Zab River, which divided the two opposing forces near the road leading towards the city.

“We hope there will be no fighting to keep Iraq as a federal country but we are absolutely ready to fight if we receive orders to do so,” Iraqi Army Major Yahyah Salman, heading a tank unit, told IRIN. “We hope we won’t need to begin a new war but there should be no borders like this inside Iraq,” he added, gesturing towards the peshmerga positions.

A peshmerga fighter washing pots and pans in the river chatted and joked with an Iraqi federal policeman standing on the opposite bank beside a machine-gun trained on peshmerga positions.

“It’s hot today. Shall we go for a swim later?” another peshmerga soldier shouted across the river to the Iraqi soldiers.

The deadline passed in the early hours of the next morning and, following overnight clashes, reported as intense, for control of a military airbase, the Iraqi Army advanced towards Kirkuk, their armoured bulldozers ploughing through now-abandoned Kurdish defences. 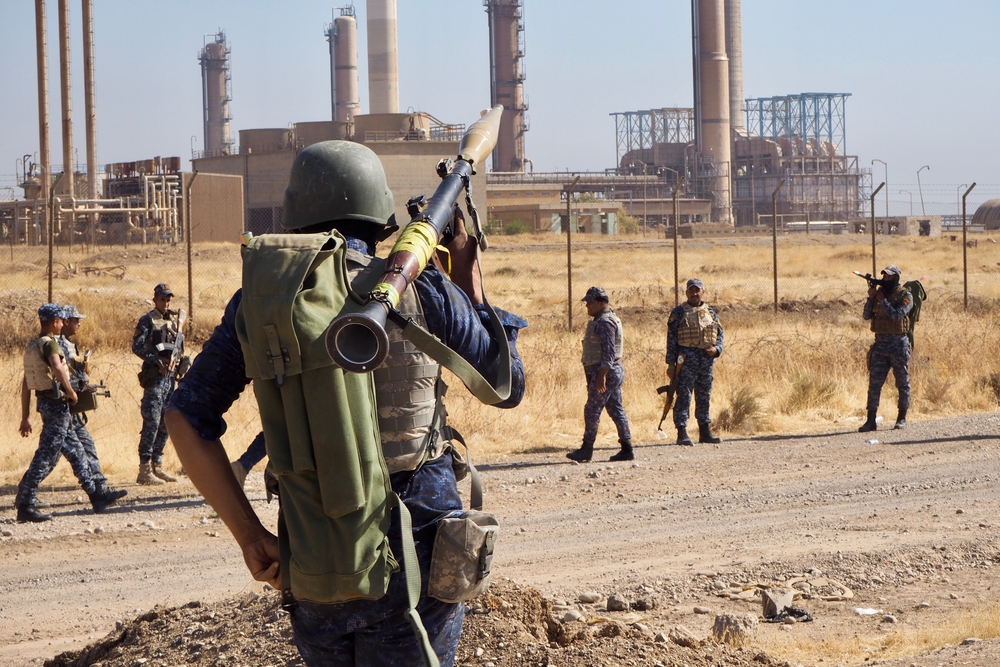 IRIN witnessed the advance, which was led by the Iraqi Army, several Iraqi Special Forces units, and the country’s Federal Police. With no direct clashes and only sporadic exchanges of fire, the advance was largely peaceful on the road to Kirkuk and in the city itself. By 17 October, the Iraqi Army had declared itself in control of the local oilfields.

Elsewhere, the transition of power was not so peaceful. In the nearby town of Tuz Khurmatu – which also saw violence on election day – fighting reportedly left 51 civilians wounded and five dead.

While the international community called for calm and Iraqi and Kurdish leaders stepped up their rival political rhetoric, Iraqi military convoys rolled past deserted oil facilities and abandoned peshmerga outposts, out onto the main Kirkuk road. What was noticeable was the raucous welcome they received from the city’s minority populations.

Arab and Turkmen villagers flocked into the streets to cheer the soldiers, and a middle-aged man ran forward to fire celebratory gunfire from an aged Kalashnikov, which kept jamming. “We are so happy to see the Iraqi Army here today,” said an elderly woman, her eyes welling with tears. “We waited so long for this victory.” Another man said: “To be honest, the Kurds were okay and I am a policeman so I have to work with whoever is in change, but I am very, very happy today because the army will be much better for Kirkuk.”

As the Iraqi forces reached the outskirts of Kirkuk, the smouldering wreckage of a burned-out Toyota Hilux was the only evidence of any resistance. In the back lay a torn-open corpse. “There were three peshmerga driving towards the Iraqi Army when the car exploded. We saw the other two peshmerga running away,” a local resident told IRIN.

Iraqi Turkmen living in Kurdistan were the largest ethnic minority demographic to have taken a public stance against the referendum, with Turkmen political parties pledging allegiance to Baghdad and calling on people to boycott the vote.

Why favour the central government?

Some explanation for minority support for Iraq’s federal government may be found in simple economics – salaries in the KRG for public sector workers and peshmerga have been slashed since 2014, with reduced payments routinely delayed.

“Iraq’s minorities are divided, even amongst themselves, and are stuck between two powers,” explained Iraq research fellow at Chatham House, Renad Mansour. “The KRG has long supported political movements and leaders they perceived as loyal, and ordinary people are now realising that issues such as salaries and regular supplies of electricity and water are more important than nationalism and top-down politics.” 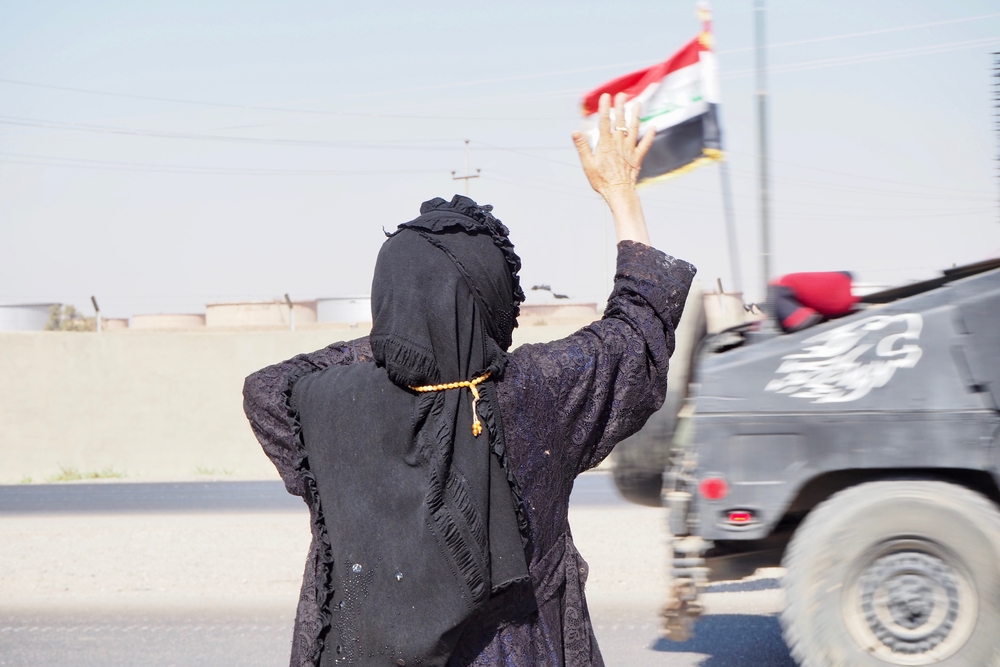 It was not only minorities who welcomed the Iraqi advance: As soldiers took down a huge Kurdish flag, Mohammed, a Kurdish journalist, said: “This is very good, seeing the army here today. The KRG president {Barzani} is a danger, a great danger, to everyone. He has made a new war between the Kurds and the Arabs in Iraq.”

Mohammed, 45, added that he had boycotted the referendum because he thought it was a terrible idea that would only serve the interests of Kurdish politicians and not the Kurdish people.

On 20 October, the day after the Iraqi Armed forces took control of Kirkuk, life in the city already seemed to be returning to a new normal. Iraqi and Turkmen flags were prominent, now flying alongside the Kurdish flags, to represent the multi-ethnic city. The removal of Kurdish flags the previous day had been merely symbolic, said one soldier.

But, whilst ethnic minorities who say they suffered marginalisation under Kurdish rule were celebrating, Iraq’s takeover of Kirkuk was a dark day for Kurds.

“Our Kurdish friends are very upset and angry about what happened here,” said Turkmen Ahmed, 46, serving tea from a roadside stall. “They are not angry with the Iraqi Army, but they are angry with the peshmerga because they feel betrayed.”

Fearing sectarian violence, hundreds of Kurds piled possessions into cars and fled Kirkuk, many returning a day or two later. KRG authorities and associated media made no effort to stem the hysteria, reporting incidences of violence and revenge from Iraq’s Iranian-backed Hashd al-Shaabi (popular mobilisation) forces in Kirkuk, which people on the ground told IRIN were largely untrue.

On 16 October, the UN reported that an estimated 61,000 people had fled disputed territories, the majority from Kirkuk. By 21 October, it said “well over 100,000” civilians had fled from Kirkuk, Makhmour, and Tuz Khurmatu – although some had already gone back home.

Meanwhile, fragile Kurdish political unity has been crumbling fast. The independence referendum had given the main parties – the late Jalal Talibani’s Patriotic Union of Kurdistan and Barzani’s Kurdish Democratic Party ­– a shared goal. But the Iraqi army advance swiftly divided them again, with both sides blaming the other for the fall of Kirkuk.

Barzani's press office pumped out inflammatory statements, including from the General Command of Kurdish Peshmerga Forces, about the “historic treason” of the PUK, which claimed its members had met with Iraqi and Iranian officials and struck a deal not to defend the province. This was echoed by Barzani himself who said that “some people from a certain political party had unilaterally paved the way for such an attack whose result was the withdrawal of the Peshmerga forces from Kirkuk. 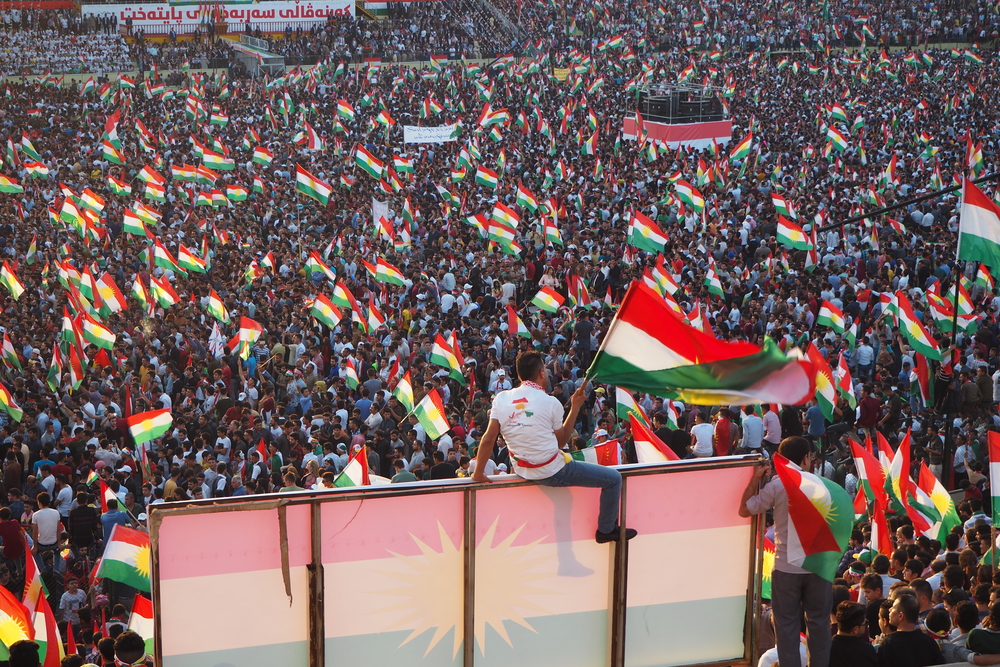 Tom Westcott/IRIN
A pro-referendum event in Erbil, days before the vote

PUK spokesman Sadi Ehmed Pire told reporters the events in Kirkuk were a direct result of the referendum.

“The KRG have created another external threat in the form of Iran and the Hashd al-Shaabi to try and unite people against this threat, but people are now starting to see through this,” said Chatham House’s Mansour.

That doesn’t mean Iran had no involvement in what happened in Kirkuk. PUK spokesman Sadi Ehmed Pire said there had been Iranian and Turkish involvement in the takeover – that, in short, it reached the point where real fighting was no longer on the cards. “PUK authorities agreed with Iraqi authorities over Kirkuk. The withdrawal of the Peshmerga was part of that agreement,” he said.

For its part, the Iraqi branch of the Turkey-based Kurdistan Workers Party (PKK) released a statement saying it had tried to defend Kirkuk but was unable to hold its positions after peshmerga forces retreated and broke the lines of defence.

While Kurdish parties squabble and lash out at one another, the Iraqi armed forces have taken back control of other disputed border territories held by the KRG, including Sinjar, again meeting little or no resistance. Stronger resistance was met as Iraqi forces drew closer to Iraqi Kurdistan’s de facto capital Erbil, with reports of fierce clashes late last week as Baghdad sought to further push KRG control back to its 2003 borders.

The KRG’s decision to pursue the independence referendum against the will of long-standing allies in the region and beyond has likely lost it some international support. But it’s decision to include ethnically mixed Kirkuk province in the vote may prove even more costly to the cause.

(TOP PHOTO: An Iraqi federal policeman poses for photos in front of a defaced Kurdish flag at a border crossing on the way into Kirkuk. Tom Westcott/IRIN)