Read about what we achieved.
Massive flooding in North Korea has killed at least 138 people and washed out roads, making it impossible for relief workers to reach thousands of victims. In addition to physical barriers to delivering aid, the crisis highlights the difficulties agencies face in a country subject to authoritarian rule, as well as international sanctions.
While the full extent of flood damage won’t be known until relief workers are able to reach areas in the northeastern part of the country, the UN’s resident coordinator Tapan Mishra said in a statement today that about 140,000 people need assistance.
State media said the floods are the worst natural disaster to hit the Democratic People’s Republic of Korea in 70 years.
“The storm and flooding left houses for tens of thousands of families and public buildings collapsed and railways, roads, electric power system[s], industrial establishment[s] and farm lands destroyed or submerged,” the state’s Korea Central News Agency said on Sunday. 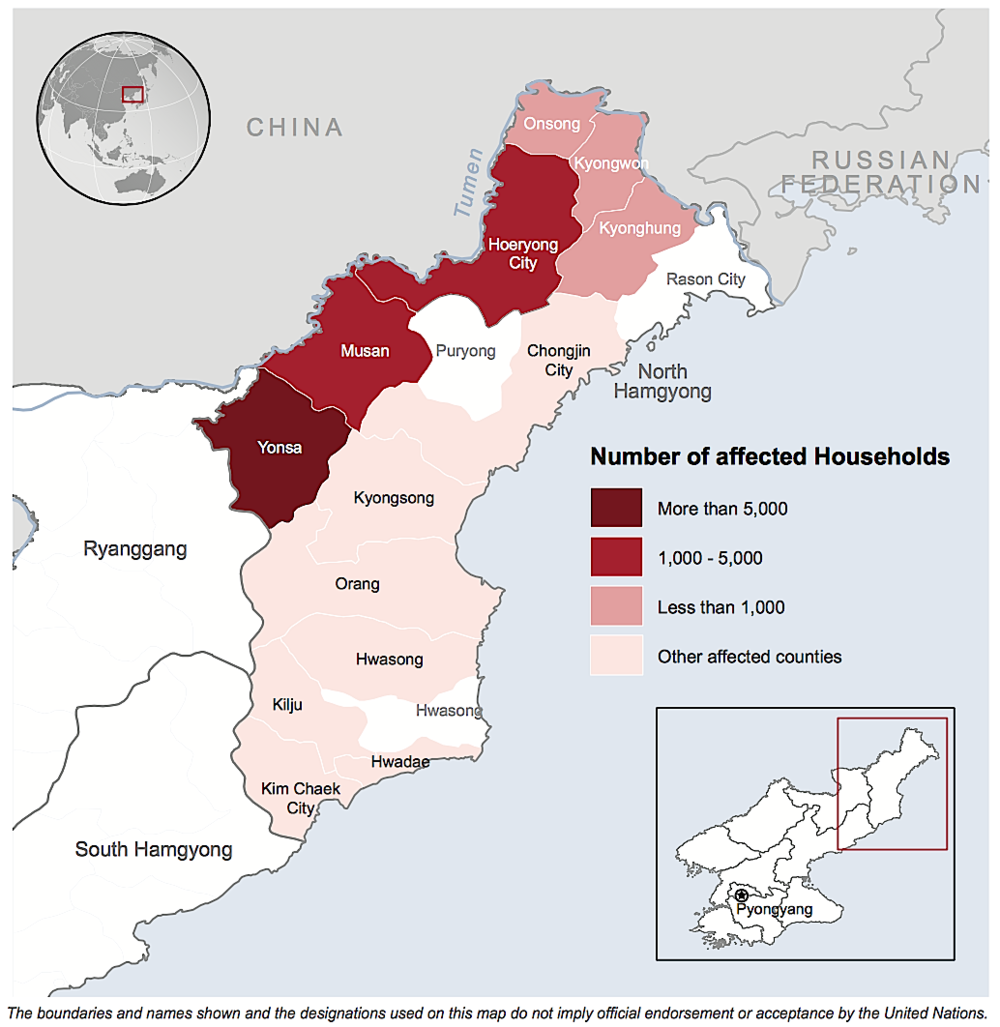 OCHA
Flood-hit areas in North Korea
The magnitude of the disaster prompted the government to ask for help from international agencies and, in a relatively rare move, it invited aid officials to join an assessment mission last week to flood-hit areas.
The team was unable to reach two counties – Musan and Yonsa – because flooding had washed away 50 kilometres of road, according to Murat Sahin, who is deputy representative to the DPRK for UNICEF.
“There is now a large team of local people working to repair these roads and bridges, in order to provide access to these heavily hit counties,” he said in an email from Pyongyang, North Korea’s capital. “We expect the roads to be open by this weekend.”

The Red Cross said 1,000 volunteers helped government authorities carry out search and rescue efforts and provided emergency medical care in the immediate aftermath of the floods, which struck North Hamgyong Province on 9 September. The UN’s World Food Programme said it has so far distributed emergency rations to 140,000 people.
In order to meet the urgent need for rations, WFP dipped into stocks that were meant to go to young children and pregnant or nursing mothers as part of a programme that provides food to 650,000 people throughout the country. The WFP considers about 70 percent of North Korea’s 25 million people to be “food insecure”, while a 2013 nutrition survey by UN agencies found that 28 percent of the population is chronically malnourished.
SEE: Drought by numbers in North Korea
Now, WFP needs to replace those rations, but that could be harder than you’d expect.
In response to its fourth nuclear test, the UN tightened sanctions on North Korea in March. Humanitarian aid is exempt from the sanctions regime, but banks are now even more reluctant than before to make transfers. As a result, the UN lost its banking channel and aid agencies are still trying to figure out a way to get cash into the country to replace their rapidly dwindling supplies.
“While the sanctions did not prevent us from responding to these floods, this emergency response – which obviously comes on top of planned programme expenses – is forcing us to spend what cash we do have access to more quickly than anticipated, which will cause further challenges in coming months,” Silke Buhr, a WFP spokeswoman, told IRIN. 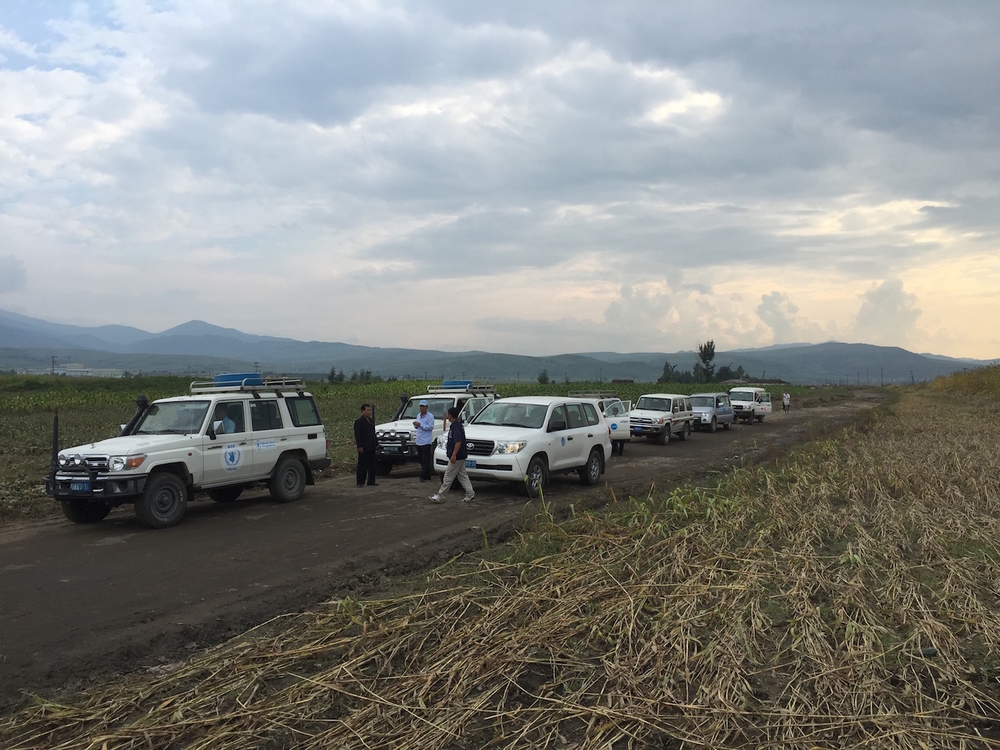 UNICEF
Aid agencies carry out an assessment of flood damage in North Hamgyong province
Sahin said UNICEF has also had trouble making money transfers into North Korea, and shipments of humanitarian supplies are sometimes blocked too.
The UN resident coordinator's office told IRIN that officials are working to resolve the banking issue and hoping for a solution "soon", while agencies are taking measures to preserve the cash they have inside the country.
"In the meantime, most of the procurement is done abroad, thus minimising the need to spend cash in-country,” the office said in an email.
In addition to dealing with sanctions, agencies have a hard time raising enough funds to support their programmes as donors shy away from any relationship with North Korea, which many regard as an international pariah due to its repressive government and its insistence on developing nuclear weapons.
The WFP, for example, has been forced to scale back on food distribution and says it still needs $21 million to continue the programme into 2017, as well as $1.2 million to replace the rations it has funnelled into flood relief.
Sahin said that UNICEF has been struggling to raise money to buy vaccines to inoculate 160,000 children.
“The sudden and large-scale disaster has put significant strain on our existing resources in DPR Korea, which were already underfunded,” he said.
That situation is unlikely to change anytime soon. North Korea conducted its fifth and largest-ever nuclear test on Friday, exploding a bomb underground that caused a magnitude 5.3 earthquake and raised alarm throughout the diplomatic community.
jf/ag
(TOP PHOTO: A Red Cross member surveyed flood damage in North Hamgyong province last week. CREDIT: UNICEF)
Share this article
Join the discussion