Over the last five years, close to 4.8 million Syrians have fled the conflict in their country by crossing into Jordan, Lebanon and Turkey. But as the war drags on, neighbours are sealing their borders. Forced from their homes by airstrikes and fighting on multiple fronts, the vast majority of Syrian asylum seekers now have no legal escape route.

Earlier this week, EU leaders reached a hard-won deal with Turkey aimed at ending a migration crisis that has been building since last year, and that in recent weeks has seen tens of thousands of migrants and refugees stranded in Greece. But the agreement turns a blind eye to the fact that even larger numbers of asylum seekers are stranded back in Syria, unable to reach safety.

Syrians hoping to apply for asylum in Europe first have to physically get there. EU member states closed their embassies in Syria at the start of the conflict, and even embassies and consulates in neighbouring countries have been reluctant to process visa and asylum applications.

When Syria’s war erupted in March 2011, it was initially relatively easy for most refugees to leave the country. Those without the means to fly poured out in waves of tens of thousands across land borders into Jordan, Lebanon, and Turkey. But one by one, these exits have been restricted or closed off entirely.

Jordan closed its borders to the vast majority of Syrians in September 2014, but many are still arriving there. The numbers stranded at crossing points near Rukban and Hadalat have been growing steadily since January and have now reached more than 37,000.

No legal route out from Syria.jpg 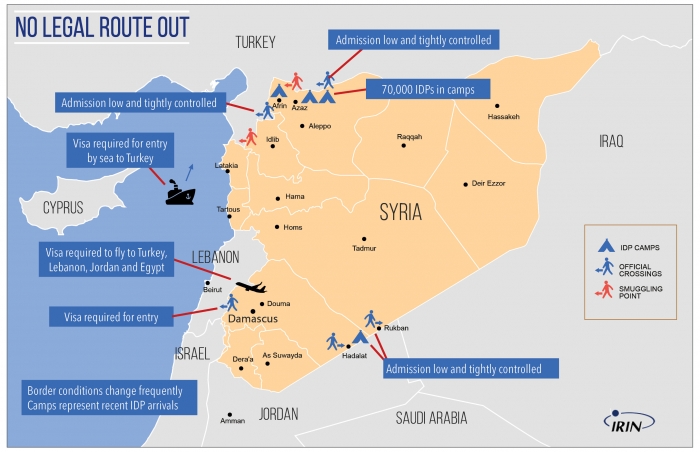 Lebanon was a popular way station. It had always been easy to cross the Lebanese border, and from there Syrian refugees with the money could either fly or seek passage by boat to Turkey – seen as the best gateway for illegal migration to Europe due to its proximity to Greece and the fact you didn’t need a visa to get there.

But Lebanon ended its open-door policy for Syrians in January 2015 when it introduced new regulations requiring them to apply for difficult-to-obtain visas or a Lebanese sponsor before being admitted. And then in January 2016, the Turkish government began to require visas for Syrians arriving by land or sea, effectively cutting off Lebanon as a route to Europe.

Other options are bleak. The heavily militarised and UN-patrolled border with Israel leads to the contested Golan Heights. Asylum seekers cannot cross. Iraq, particularly the semi-autonomous Kurdistan region, saw an influx of Syrian refugees in 2013. The borders are now mostly closed to asylum seekers. Egypt, the other main aerial route out, closed its doors to Syrians without visas in July 2013.

As “No Entry” signs were erected elsewhere, the perilous overland option through Syria’s northern border to Turkey became increasingly popular.

But Turkey, long the most generous host country in terms of the sheer numbers of Syrians it has taken in, closed its last two official border crossing points to almost all asylum seekers in March 2015. And in recent months, it has implemented further border controls aimed at not just cracking down on smugglers of goods and people, but also at preventing Kurdish fighters and militants from so-called Islamic State crossing its border with Syria.

Now, the only remaining paths out – for those who can afford it – involve difficult and dangerous illegal crossings overland into Turkey, usually with the help of people smugglers.

Their house destroyed by shelling, Ahmad, a 26-year-old taxi driver from Aleppo, and his wife Amani, paid smugglers $650 in total for two attempts to get them and their two children out of Aleppo and into Turkey using one such route, skirting the northeastern edge of Syria’s Latakia Province before crossing illegally into the Turkish border town of Yayladaği.

“We never thought about leaving Aleppo,” Ahmad told IRIN. “But when the regime and the Russian-led offensive started escalating, we realised that staying would mean simply… dying.”

It didn’t take them long to get rid of their few remaining possessions. They used money sent by Amani’s mother, who works as a cleaner in the Turkish city of Gaziantep, to pay a smuggler $400 and then travelled by bus to an informal camp in Latakia. They waited there until nightfall and then set off on foot through the wooded, hilly terrain preferred by smugglers because of the cover it provides from Turkish border guards.

“My children were very scared because of some shooting in the distance and, as they lost their shoes in the mud, I abandoned all my bags and helped them face the hard road ahead,” recalled Ahmad.

They made it as far as Guvecci – a small border village inside Turkey – before they were surrounded by Turkish police and taken to a military base with hundreds of other Syrians. Women and children were kept in one room, men in another. There was “no food, no water and not even a blanket to warm ourselves with,” said Ahmad.

“A man was bleeding after being shot by the police and no one helped him,” the young Syrian added.

The following morning, despite everything they’d been through, they were sent back to Syria. 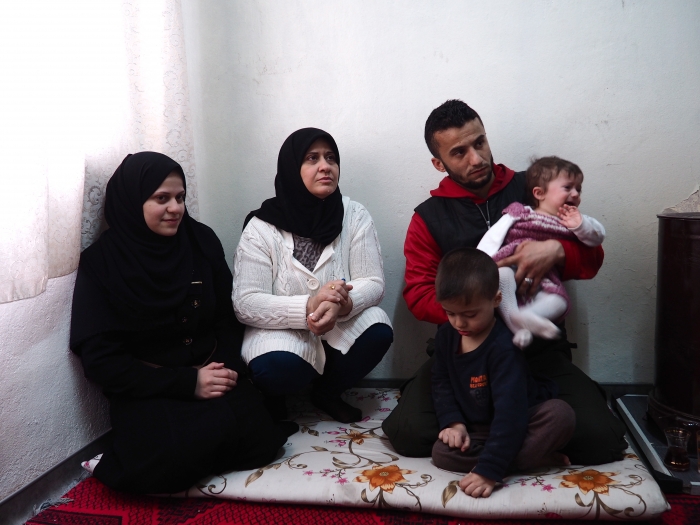 Eleonora Vio/IRIN
Ahmad and Amani with their two children and Amani's mother, Umm Abdu, at her home in Gaziantep

The family refused to give up. The second time, they paid their smugglers a lot less, $250, but things didn’t go smoothly. Ahmad described the whole experience as “like an action movie”.

The large group they joined was split in two before they started walking. One group was shot at and intercepted by Turkish police, but Ahmad and Amani’s contingent reached Guvecci, where they were handed over to a Turkish smuggler and taken to Yayladaği, then Hatay, and finally to Gaziantep, where they were reunited with Amani’s mother.

Advocacy groups, including Human Rights Watch, have been warning about the lack of legal routes out of Syria for several months.

“Jordan, Lebanon and Turkey have essentially sealed their borders with Syria, leaving civilians who can pay with no choice but to use smugglers to escape, and forcing those who can’t to stay put and risk their lives under increasingly hostile skies, including in extremely dangerous border areas near Turkey,” Gerry Simpson, a senior refugee researcher with HRW, told IRIN.

Ege Seçkin, an analyst with the IHS think tank, said the Turkish government had reportedly authorised border guards to open fire on people attempting to cross the border last March.

“The government’s rationale for that is very clear – they don’t want Kurdish militants to be going back and forth in the context of an insurgency inside Turkey,” he said, adding that the crackdown, which includes trenches and fences along some sections of the border, had made the work of smugglers much riskier. As a result, they’ve started demanding higher fees than many Syrians can afford.

Noting that the border smuggling trade had dropped dramatically since late 2015, Seckin told IRIN: “You can cross, but it comes at a cost, and it is very risky.”

Last month, Amnesty International reported that Syrian hospitals in Azaz, a border town northwest of Aleppo, were treating an average of two people a day who had been shot attempting to cross into Turkey. In one case, a 10-year-old was shot in the head.

“We are all hearing the reports about shooting incidents [at the border],” said Metin Çorabatır, president of the Research Centre on Asylum and Migration, a Turkish think tank. “The officials explain it is clashes between security forces and smugglers, but the point is that really there is no mechanism of verifying the situation. The UN doesn’t have any presence on the border area.”

The Turkish government did not respond to IRIN’s requests for comment, but Turkey’s official line is that its border remains open to those fleeing violence in Syria. In early February, President Recep Tayyip Erdogan said, “If they reached our door and have no other choice, if necessary, we have to and will let our brothers in.”

In practice, it has admitted only a fraction of the more than 85,000 Syrians displaced from their homes during the month of February, prior to a fragile “cessation of hostilities”. The largest displacement took place in Aleppo, where Russian airstrikes and advances by pro-regime ground forces sent tens of thousands of residents to the Turkish border. Approximately 70,000 people are now staying at eight camps in the Azaz area, near the Bab al-Salameh crossing.

Turkey said it had allowed 10,000 of them to cross, but Amnesty International contests this claim and NGO sources working on the border told IRIN that only critical medical cases had been allowed in.

“The majority came to the border because it is safe and they hoped to cross to Turkey,” said Sharvan Ibesh of Syrian NGO Bihar, which has a presence near the border. “The majority of people in north Aleppo had many relatives who had crossed into Turkey already, so they imagined if they crossed the border, they could [reunite with their] relatives. But unfortunately this didn’t happen.”

Conditions at the camps, which doubled in population during February, are now cramped, with three or four families sharing the same tent in freezing conditions and a lack of adequate medical facilities.

“We believe people have the right to seek refuge and safety, however we don’t see them being allowed into Turkey,” Filip Lozinski, who is managing the Norwegian Refugee Council’s aid response in northwest Syria, told IRIN. “Now we’re preparing for being able to provide necessary [ongoing] services in these camps because it looks like there’s not going to be any short-term solution.”

In early February, Turkey temporarily opened the border near Yayladaği to allow ethnic Turkmen to flee Syrian regime advances in Latakia. More than 7,000 crossed the border before it was closed again.

“If you are neither a Turkmen nor a severely injured person, your only chance to leave Syria is crossing into Turkey illegally,” said Umm Abdu, Ahmad’s mother-in-law.

Turkey has registered 2.7 million Syrians as living in the country under its temporary protection (the government does not recognise them as refugees). But many Syrians don’t register with the authorities and this week’s EU deal could see tens of thousands more refugees forced back to Turkey from Greece.

Lebanon demanded that UNHCR, the UN’s refugee agency, stop new registrations of Syrian refugees in May 2015, but at last count it was hosting more than 1.1 million. A further 637,000 are registered in Jordan.

Rights groups and aid agencies acknowledge that neighbouring countries have borne the brunt of the spill-over from Syria’s protracted civil war, but insist those trying to flee the conflict must have a safe way out.

“Countries in the region and beyond must continue to allow access to asylum for people fleeing Syria, and not forcibly return those who are desperately seeking safety.”

But with the EU poised to begin returning refugees to Turkey and no sign of any legal routes out of Syria emerging, civilians fleeing the war are increasingly trapped.

Jordan cracks (down) under refugee pressure

A timeline of Syria’s closing borders

The long way round