Following the 9/11 attacks and the launch of the Global War on Terror, many humanitarian policy wonks spoke of a new era of heightened aid instrumentalization - that is the use of humanitarian action or rhetoric as a tool to pursue political, security, development, economic, or other non-humanitarian goals, which would muddy humanitarian principles and constrain access to those in need.

But a new book, The Golden Fleece, argues that instrumentalization goes back centuries. The only thing that has changed is the “centrality and sheer size” of the humanitarian enterprise, says its editor Antonio Donini, senior researcher at Tufts University’s Feinstein International Center. “There never was a golden age of humanitarianism,” he says.

While aid agencies balked at Colin Powell’s description of them as “force multipliers” in the US “war on terror”, he was not far from wrong, says Lt-Gen (rtd) the Honorable Roméo Dallaire, head of the UN assistance mission in Rwanda during the genocide and author of Shake Hands with the Devil: The Failure of Humanity in Rwanda.

US aid agencies, for instance, were used as “force multipliers” in the Vietnam war and in the Central American civil wars of the 1970s and 1980s, to give but two examples.

“Humanitarians have been used… as fig leaves to veil government action and inaction in the face of war crimes and genocide. Humanitarians have been paid, manipulated, and `embedded’ with singular disregard for humanitarian principles. They have been routinely ignored, even in cases of obvious humanitarian need and enormous public outcry. They have been silent when they should have spoken out, and they have spoken out when they should have remained silent. They have called for military intervention… and on the few occasions when they got their wish, they mostly lived to regret it,” says co-author Ian Smillie, a long-time aid critic and founder of Canadian NGO Inter Pares.

The Golden Fleece explores different forms of aid manipulation starting in the 19th century, and progressing to the 20th and 21st centuries, presenting a series of case studies in Sudan, the Occupied Palestinian Territory, Pakistan, Somalia and Haiti, among others.

Instrumentalization can also be more subtle - for instance when humanitarian emergencies are largely ignored by aid agencies and governments alike - or, in the case of food aid, when it is used to dispose of surplus stocks, to create new markets and to win over governments, as opposed to more blatant manipulation involving say, the diversion of stocks by warring parties.

An increase in the number and severity of crises, the vast growth of the humanitarian sector, the increased ability of governments to dictate the shape of agency programming, the more intense real-time scrutiny, and the impact this has had on funding, have made agencies more aware of aid instrumentalization.

Some agencies stick to the humanitarian principles of independence, impartiality and neutrality more strictly - notably the “Dunanist” agencies International Committee of the Red Cross and NGOs such as Médecins sans Frontières (Henri Dunant inspired the creation of the Red Cross movement at the battle of Solferino).

However, even the ICRC has struggled to uphold its principles at times: for instance, by failing to step up its protection response to victims of concentration camps in 1930s Germany; or in keeping silent about British-run concentration camps during the 1890s Boer war.

For multi-mandate agencies - both NGOs and UN - neutrality, independence and impartiality “are more guidelines than principles. For them, manipulation… has been the default position, some using and some eager to be used,” says the book.

The danger for them is that in a place like Afghanistan, “some multi-mandate agencies may find themselves in a bind,” says Donini. “They want to do humanitarian aid at one point, but having been implementing partners for the government, for military-political provincial reconstruction teams, they are realizing these chickens will come home to roost.”

Instrumenalization of aid is more obvious in some crises than others. In Somalia all local groups - from local NGOs to businessmen to warlords - have sought to manipulate assistance to project their authority or enrich themselves, say the authors.

The authors refrain from being prescriptive, but some lessons do emerge. A clear one is that calling for military intervention is almost always regretted later on. “Agencies call for the cavalry at their peril,” says Smillie, “This is a cautionary tale.”

Another is that aid agencies too often compartmentalize or simplify their view of a complex emergency, perpetuating a self-referential reality in which their solutions (food, tents), define the problem. This can often lead them to ignore the real problems at hand (human rights abuses, say, in Sri Lanka, or feeding genocidal killers, say, in Rwanda).

Such a vision leads Darfur to be depicted as a relatively straightforward tale of “bad” Arabs and “good” Africans rather than a more complex power struggle over land and water. 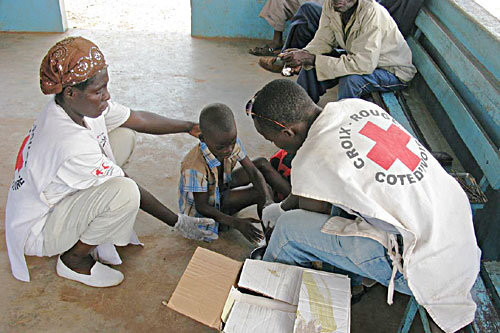 It also blinds them to their own impact: several researchers have asserted that humanitarian aid prolonged the war in Nigeria’s Biafra in the 1960s - a conflict in which an estimated one million people died, the majority as a result of malnutrition. Of course hindsight is a wonderful thing, but Smillie, who was there at the time, says several NGOs were aware of this dynamic at the time.

Perhaps one of the most useful lessons is that, in the authors’ analysis, manipulation of assistance generally does not get the manipulators what they want. “The fact that aid can be a force multiplier may be wrong,” said Smillie. Studies have shown for instance, that humanitarian aid in Iraq and Afghanistan did little to win over hearts and minds. Perhaps its very ineffectiveness should be an incentive to loosen the hold.

As Western power wanes and crisis-affected countries begin to assert their right to control crisis response, new dynamics will arise. Donini gave Sri Lanka as an example of where its leader Mahinda Rajapakse used the Global War on Terror and respect for sovereignty rhetoric to justify overwhelming force against the Tamil uprising when he came to power in 2005, out-manoeuvering and repressing humanitarians.

Long on problems and short on solutions, the book can make for depressing reading. But Donini stressed a final point: “This book focuses on the negative - we wanted to unscramble instrumentalization. But we shouldn’t deny all the positive…. there is much about the humanitarian enterprise that is really quite good.”