In a nondescript cafe in one of Istanbul's more rundown neighbourhoods, migrants from Africa watch a Congolese soccer match as Afro-pop music blasts in the background.

“We feel comfortable in here, everyone is from Cameroon or Congo,” Patrick, the leader of an informal Cameroonian community organization, told IRIN. “But outside of this restaurant, it’s a very hard life for us.”

Patrick, who did not wish to give his full name, did not know much about Turkey before he arrived here three years ago. He heard only that there was a chance of finding a job in Istanbul and that the country’s lenient visa policy made travel there easier than to other European countries. But after three years of only occasional, low-paying work, Patrick says, “I was wrong to come here, it’s not what I expected.”

While most media and humanitarian attention has been on the influx of 1.7 million Syrian refugees into Turkey, in recent years the country has also seen the arrival of an increased number of African migrants searching for economic opportunities. Although some manage to secure steady employment, many complain about a lack of job opportunities, poor living conditions, workplace exploitation and racism.

There are no statistics for how many Africans presently live in Turkey, but some areas of Istanbul, particularly parts of Yenikapi, Osmanbey, Eminonu and Kurtulus, are especially popular with Africans these days. The largest groups are believed to be from Somalia and Nigeria.

Brigitte Suter, a senior researcher at Malmö University in Sweden, who published her dissertation on Africans in Istanbul, attributed their increased presence in the city to ongoing political turmoil in several African countries, increased diplomatic relations between Turkey and some African states and the development of African business and personal networks in Istanbul.

“None of my informants had a clue about Turkey before arrival,” she said. “Many were even surprised that English was not the lingua franca.”

Many of the Africans IRIN interviewed said it took months before they were able to secure enough work to afford food and rent. While looking, they often burned through any savings and either relied on a network of other Africans in Istanbul for support or had to ask relatives back home to send money.

Although Turkey’s entry visa policy is lenient, obtaining a work permit is difficult and many migrants simply overstay their tourist visas. But having no legal status or knowledge of the Turkish language leaves them susceptible to exploitation by employers.

Frank, 24, arrived from Cameroon about three months ago having paid an agent back home to arrange a job and work visa. It turned out to be a scam. Since then, he has found only two short-term jobs. One paid a fraction of the amount the agent had promised he would earn, while the other did not pay at all.

Many of the migrants rely on getting informal work through their compatriots. Senegalese are known for peddling goods like sunglasses or wallets on the street; Nigerians often work in textiles and trade; and Cameroonians tend to sell clothing. Some get involved in petty crime and prostitution to survive. 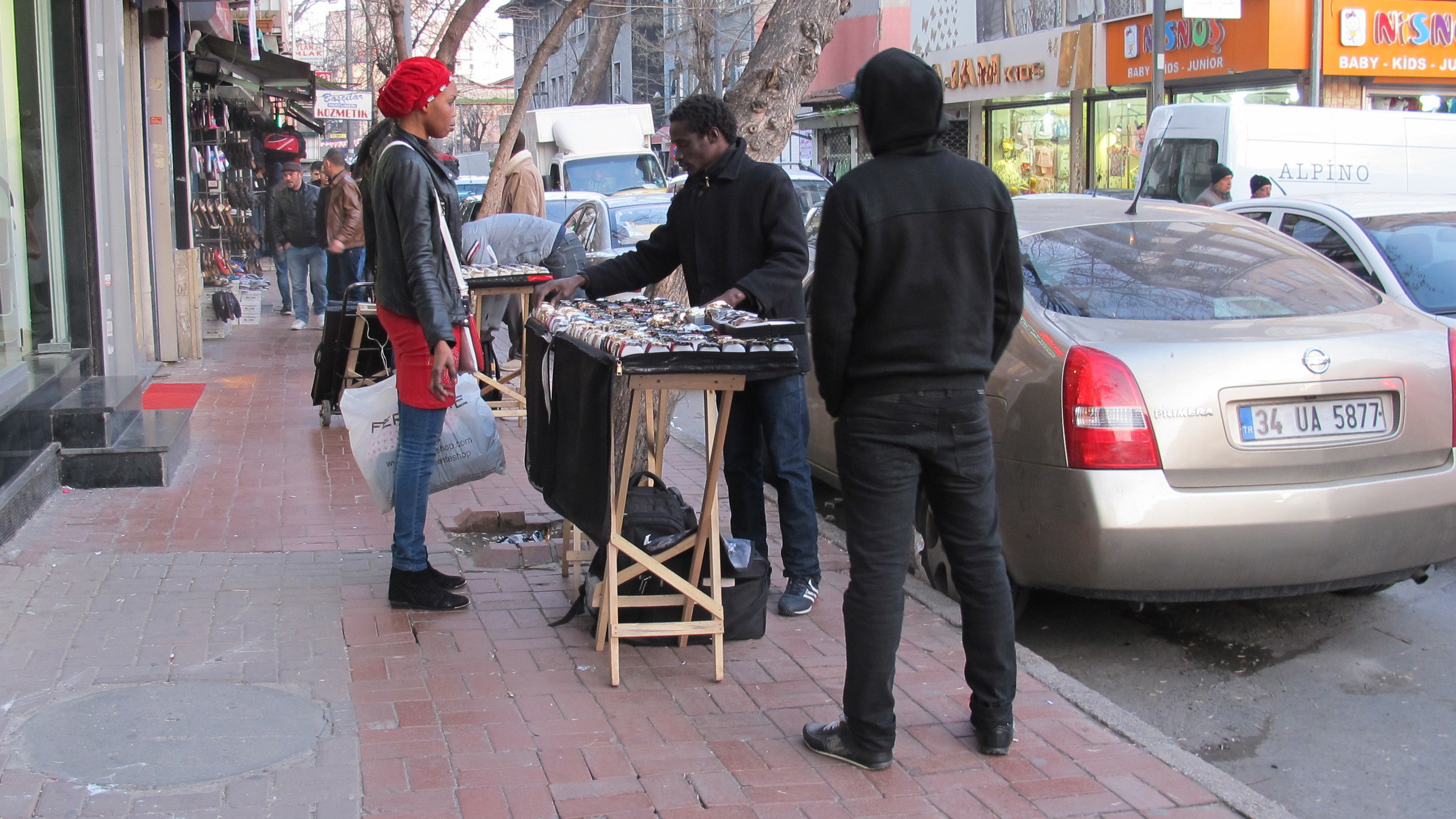 Photo: Michael Kaplan/IRIN
Many African migrants in Istanbul work in the informal economy

Even with a job, earning enough to send money back home – the main purpose of coming to Turkey for many – is often difficult. Some are forced to rely on money transfers sent from their family members back in Africa, defeating the point of leaving in the first place.

“Life was much better in Cameroon,” said Frank. “There’re too many rats and mice,” he said, referring to the apartment he shares with nine other Cameroonians.

“I used to eat three or four meals a day, but now it’s just rice and juice.”

As a steady stream of refugees from Syria exhausts much of Turkey's aid resources, few humanitarian agencies are working with African migrants. The UN Refugee Agency (UNHCR) provides monetary and legal support for those eligible for asylum until they can be resettled in a third country (Turkey only allows refugees from other European countries to remain), and several aid groups provide emergency healthcare, food and clothing to women and children.

A pervading sense of bitterness was made worse when the Turkish government began issuing temporary work permits to Syrians late last year.

Suter said the migrants she interviewed reported that Turkish society in general was ‘not used to Blacks’.

Several of the migrants told IRIN they had been touched by Turkish people curious about their skin colour and one woman said sexual harassment was common.

"This is not a country for black people," said Frank.

To Greece and back again

Many Africans come to Turkey hoping to use it as a stepping stone to other countries in Europe while others attempt the journey after failing to find steady work in Istanbul. Turkey has been a transit point to Europe for decades, but the crisis in Syria has fueled the human smuggling trade.

Late last year, Eloi, also from Cameroon, paid about U$2,100 to be smuggled from Turkey to Greece, but his ship was intercepted by Turkish authorities and turned around. He and the 43 others on board, including Syrians, Iraqis, Afghans and other Africans, were detained for two weeks before being released.

"It was terrifying," Eloi said of his experience. "But I have to try it again, I'm afraid of getting old here."

Sea crossings to Europe are extremely dangerous. In the first two months of 2015, nearly 400 people died trying to cross the Mediterranean, according to UNHCR.

"Most people do make it," said Chris, a Nigerian who earns a commission setting people up with smugglers. "For about 2,000 Euros, depending on what you want, you can get to Greece [by land] from Edirne or [by boat] from Izmir… but you’re at your own risk.”

A readmission agreement between Turkey and the European Union stipulating that non-Europeans caught crossing illegally into Greece can be returned to Turkey, means that some migrants end up back where they started in Istanbul.

It’s a cycle Frank is hoping to avoid. After months going from shop-to-shop fruitlessly looking for work, he’s ready to go home, although raising the money will be a challenge. “I think it’s a big risk to go [to Europe] and I can’t stay in this country anymore,” he said.