The World Humanitarian Summit starts on Monday, bringing together (some) global leaders to agree ways to better respond to the world’s crises. Here’s what we’ll be watching out for.

Who’s going to show up?

A summit ought to have heads of state. That’s the definition. Of 193 UN member states, how many are going to show up? The lower the rank of the government representative, the less seriously they take it. If developing countries send their presidents and PMs, while the rich and powerful countries send lowly deputy ministers, the idea of a meeting of minds is, well, not met. So far the organisers have told us 60 heads of state or government will come out of 175 countries attending – is it too late for that to rise? Are the RSVPs looking a bit patchy? And how many will be A-listers (we know neither Putin nor Obama are going)? The Paris climate summit managed a score of about 150. Given Turkey’s recent past, security will be very tight, and hosts and organisers alike will be relieved if and when it’s over without incident.

Are the RSVPs looking a bit patchy?

Governments, rich and poor, have their reasons for keeping a low profile: the rich ones may feel they are being hit up for more cash at a time of austerity, while the poorer ones may be wary of NGOs and civil society usurping their authority. Russia has said that this UN-organised gathering left the views of the member states “on the sidewalk”. The African Union’s position paper makes a pointed reminder that states have “primary responsibility” for emergency relief. For the careful listener, references in speeches to UN General Assembly resolution 46/182, the bedrock of the current much-criticised international emergency response system, usually suggest a favouring of the pre-eminence of the state and a warning to NGOs not to get above their station. NGOs, accustomed to being put “on the children’s table” at these events, have been centre stage in the lead-up and will have more prominence at this summit. But there’s a drawback: if states (that have duties, obligations and weapons) are treated the same as unarmed non-profits, does that help states shirk their responsibilities? Whose issues will make it to the final document (if there is one)?

Do the NGOs stay on the "children's table"?

Budgets, staff and strategies for longer-term development aid tend to be separate from emergency response. Development funding is at least four times more than emergency aid or “humanitarian” spending. As crises erupt, recur and drag on, shouldn’t these two be better aligned? At the summit, many will argue the distinction is often unhelpful and the two should work towards the same goals. But others feel passionately that a development process is inherently political and cannot act boldly, independently and in a principled way where governments are a big part of the problem. Watch out on one side for the “everything-and-the-kitchen-sink” rhetoric, folding poverty, climate change and disaster prevention together (the International Committee of the Red Cross calls this “totalisation”). Big development bureaucracies will generally favour this, and it likely will be the arena of UN agency and World Bank competition and manouevering. On the other end of the spectrum, defenders of the special, exceptional nature of humanitarian response will refer to humanitarian principles a lot, especially independence and neutrality. Will the exceptionalists or the totalisers hold sway?

Beyond the soundbite: “as local as possible, as international as necessary”

Local aid groups are rising in respect and influence, at least in commonly-rehearsed rhetoric, while the model of foreign aid groups leaping into action is looking increasingly inefficient and inequitable. Local NGO advocates will speak about a new model, power and funding flows. The “shy internationalists” don’t want to be seen defending the white-people-jumping-on-planes cliché. They may speak of technical smarts, “capacity” and proximity (the value of their teams having face-to-face interaction with people on the ground). A truce between the internationalists and localists has been achieved to some extent with the graceful soundbite: “as local as possible, as international as necessary”. But tensions remain, arising both from self-interest and principle. Foreigners may have an advantage of being seen as properly neutral in some wars. Local groups may not have the scale and systems to take over some operations. BINGOs (Big International NGOs) may not view their demise with equanimity. All local NGOs may not be saintly and authentic. Watch out for “south-washing” and lip-service to localisation and détente: northern aid groups that play up “partnerships” to show they are well-planted at the grassroots may not really be letting go.

The devil is not in the details. It’s in the subordinate clauses.

The devil is not in the details. It’s in the subordinate clauses. The Grand Bargain’s concrete target for a quarter of funding to go to local and national aid operators by 2020 would be huge if implemented: a 20-fold increase in just three or four years. But look, there’s a get-out clause: the money should flow “as directly as possible”, a phrase that leaves the door open to continued subcontracting.  Are commitments with exit clauses really commitments? There will be a lot of “urging” and “endeavouring” and “making concrete progress towards”. Look for numbers in statements. Discount heavily. Don’t forget the phrase “it’s a process” – the evergreen euphemism for kicking the can down the road. There’s probably a drinking game here, or at least a round of bullshit bingo.

We’ll be watching for those who call for change in others, but don’t offer much detail on how they will change themselves. Also look out for declarations of turf: laying claim to thematic or professional segments. We’ve already seen a badly-handled carve-up with the issue of “inclusion” – one “Inclusion Charter” covers disability; another aims to rope in disability, age and other vulnerabilities. Two different inclusion charters?  If the inclusion people can’t get it together, what hope is there for the rest? Similarly, there are rival claimants to the sexy “humanitarian innovation” crown. Capturing “mind share” at an event as fluid and happily broad as the summit might be as good a result as some would hope to get. 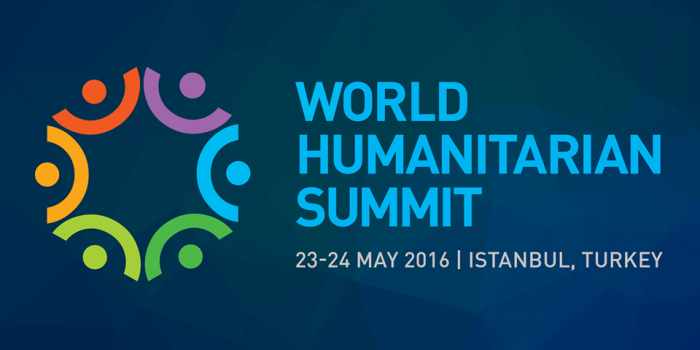 If it’s a miasma of cosy platitudes by the Bosphorus, critics will have a field day.

Rows, bust-ups and blunt statements will show there is real significance to the summit. When real issues are at stake, and the status quo is challenged, you’d expect some pushback. If it’s a miasma of cosy platitudes by the Bosphorus, then critics will justifiably have a field day. There will be petty conflict and grumbling about passes, airtime and badges and who gets into the VIP section. That’s not what matters. Much business will be done in the corridors, souks and shisha cafés.

The summit may already have exerted its greatest influence – its open-ended consultation phase sparked much internal reflection, even if messy, and changes are afoot. Whatever theatricals and absurdities happen in Istanbul, real changes to make better help reach more people are the things to watch for in the months and years to come.