IRIN is introducing an occasional series of "Open Forum" guest columns to broaden the
space for debate and discussion. Argument, opinion, comment,
conversation, constructive rant. In the first of his irreverent takes on all things humanitarian - which
we have dubbed "Uneven Distributions" - humanitarian consultant Paul
Currion asks what it would take to keep the public's attention on Ebola.

Film critic Roger Ebert wrote that pandemics were “one of the great scare stories of our time, the notion that deep in the uncharted rain forests, deadly diseases are lurking, and if they ever escape their jungle homes and enter the human bloodstream, there will be a new plague the likes of which we have never seen”. Thankfully, this Ebola outbreak isn't that specific apocalypse. But in terms of holding public attention, that's part of the problem.

I wanted to impress the hell out of you in this first column, so I made a graph (Fact: graphs have been scientifically proven to impress the hell out of you.) Look how quickly public interest in the Ebola epidemic has fallen away. People aren't talking about Ebola as much as they used to – definitely not as much as they should be, considering the worst-case scenario is pretty much the dictionary definition of “worst case”.

Waning interest in Ebola is a major concern 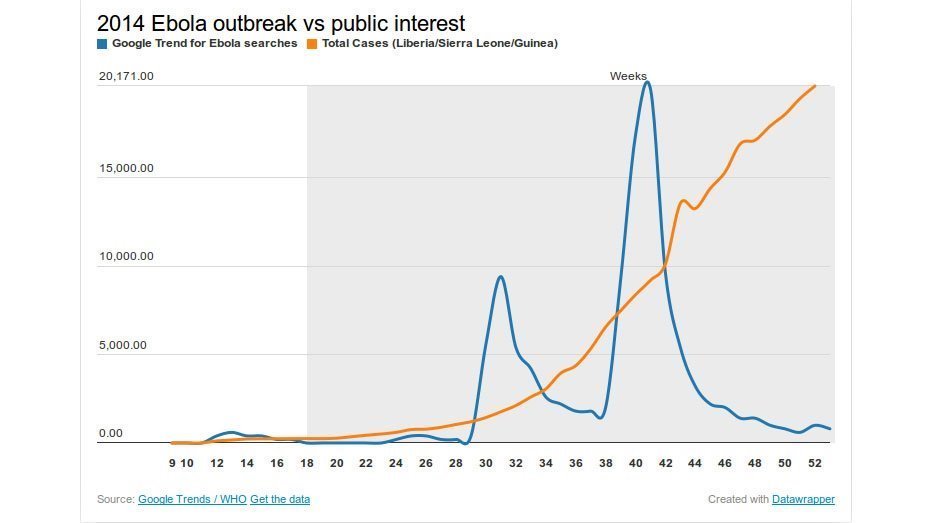 Diminishing interest in Ebola – despite better public information than ever before, such as the World Health Organization’s semi-interactive map, the Humanitarian Data Exchange dashboard or EbolaDeeply’s aggregation – is worryingly familiar. A 1989 Los Angeles Times  article pointed out: “The drop in concern about AIDS [was] due largely to lower concern among whites and people over age 40 that they personally will be affected by the epidemic,” (Thanks, old white people!)  The same dynamic is playing out with Ebola, to the extent that even those in affected countries are living (and dying) in denial.

The media focus on easy numbers, but cumulative caseload (18,603 confirmed cases as of 17 December 2014) and fatality rate (hovering at around 70 percent like a peculiarly malevolent hummingbird) are terrible metrics to measure the epidemic's impact. Economic figures paint the bigger picture: on 2 December, the World Bank issued a report revising growth projections for countries affected by Ebola, with both Sierra Leone and Guinea moving into the negative in 2015. On one of those rare occasions when economists agree, a report from the UN Economic Commission for Africa also laid it out clearly.

Waning global interest in Ebola is a serious problem. 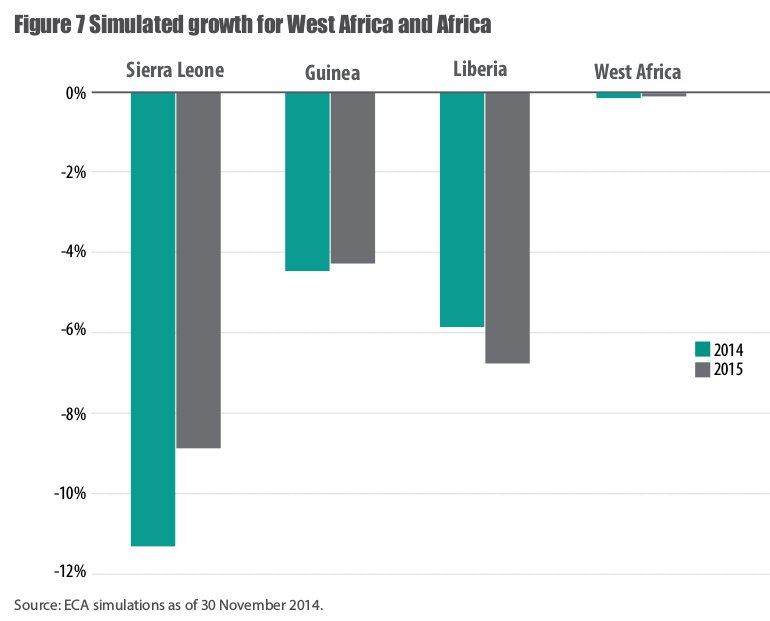 Across the three countries suffering the brunt of the epidemic, lost income in 2014-15 is estimated to be more than US $2 billion. Financial projections aren't always reliable – the World Bank updates its predictions more often than Beyonce changes wardrobe – but the message is clear. Any economic contraction in already poor countries means big decreases in the quality of people's lives.  But the second-order impacts are where the real action is, because they show how this type of epidemic can fatally wound countries:

- The impact of Ebola is gendered – 75 percent of fatalities in Liberia have been women, because women do most of the caregiving when a relative falls ill.

- The group with the highest fatality rates are health workers themselves, hollowing out already under-resourced health systems.

- Schools have been closed in Ebola-affected countries for varying amounts of time. The longer children are out of school, the less likely it is they'll return.

- Closed markets mean food shortages for all, with farmers eating their seeds – which means no seeds for planting next year.

- More resources for Ebola translates into fewer resources for other diseases – even threatening the welcome progress made in fighting malaria.

We live in an attention economy in which most of the world stopped worrying when it became clear that they weren't going to be overrun with Ebola zombies. Yet the zombie television series The Walking Dead has managed to keep people's attention for five years now – about five years longer than WHO managed to keep people's attention after the 2009 H1N1 misfire – so maybe we should be thinking more about zombies?

Well, no. Treating Ebola victims like zombies is a stupid idea, even by my low standards. Now that the Ebola Fighters have been named Person of the Year by Time magazine, how about a new TV franchise? Mighty Morphin Ebola Fighters could be huge – one from each of the Ebola-affected countries in West Africa and when they combine forces they turn into a giant David Nabarro.

The struggle isn't going badly, all things considered, but this isn't going to be the last outbreak we'll have to manage – we're still waiting for that big influenza pandemic, remember? To avoid catastrophe next time, we need to be better prepared, which means that we need a longer-term commitment: to re-examine the logic of the global public health system, to focus on a more holistic approach and to invest in health systems in at-risk countries. What we talk about when we talk about Ebola needs to be a much more compelling narrative than Roger Ebert's scare story

If you want to contribute to "Open
Forum”, contact [email protected].