Every Friday, IRIN’s team of specialist editors offers a curation of humanitarian news, trends, and developments from around the globe.

The women of Syria’s war prisons

Over the past few months, the Syrian government has been quietly issuing death notices for hundreds of political prisoners who died in its jails. Many of the deaths appear to have taken place in the early years of the country’s seven year war, and analysts believe that the flurry of notices suggests president Bashar al-Assad’s regime may be signalling it is firmly in control of the country and no longer fears the anger that admitting these deaths could provoke.

Many thousands of detainees have gone into Syria’s notorious detention system, and among those who actually made it out is artist Azza Abo Rebieh, whose drawings of her fellow prisoners in Damascus’ Adra prison are profiled in the New York Times this week. Abo Rabieh, who painted protest murals at the start of the uprising against al-Assad and later smuggled food and medicine to displaced people, draws the women she met in detention from 2015 to 2016. She lives and draws in Beirut now, and the images she makes, as well as the stories she tells, are haunting.

And still the war is not over for civilians in northwestern Idlib province, where the UN estimates a looming government offensive on the last major rebel-held territory in the country could displace as many as 700,000 people. Many of Idlib’s 2.5 million civilians have already fled or been evacuated from their homes elsewhere in Syria, and the government has begun dropping leaflets over the province urging residents to cooperate with the army.

In search of “tangible progress” in Myanmar

It was billed as the first step in a long process to return Rohingya refugees to Myanmar. But two months after UN agencies signed a secretive agreement to explore repatriation with Myanmar’s government, there’s been little “tangible progress” to do just that. The UN’s refugee agency, UNHCR, and its development arm, UNDP, released a statement this week urging the government to “improve conditions” in northern Rakhine State, where a military campaign last August pushed hundreds of thousands of Rohingya people into neighbouring Bangladesh. Calling for “tangible” progress, of course, implies there has been anything but. One key takeaway: the very basis of the controversial agreement was that UNHCR and UNDP would be given access to northern Rakhine, which has largely been closed off to international aid groups for the last year. This hasn’t happened. Both UN agencies submitted travel requests to start working in mid-June; the government hasn’t replied. In the meantime, remaining Rohingya and ethnic Rakhine communities in the state continue to “live in fear of one another” and there’s been no movement at all on the core issue for most Rohingya – a clear path to citizenship.

The ripples of #MeToo

The recent scandals in aid agencies and subsequent crackdown mean more cases of sexual harassment or abuse are being dealt with, according to the Thomson Reuters Foundation. For example, the Norwegian Refugee Council and Save the Children disclosed increases in reported cases in 2018 compared to last year. Others told TRF they expected cases to rise, while some in the survey of 21 agencies gave fewer details or were unable to report numbers yet. A few more developments on #MeToo issues:

- An IRIN investigation in Central African Republic, “I have no power to complain”, reveals new allegations of abuse by UN peacekeepers as well as broken promises on follow-up care for victims and botched investigations

- A pattern of alleged harassment by an official of UN Women was reported by Newsweek, and the UN agency has called upon investigators to wrap up the case, without offering details

- The Geneva-based policy group, the Inter-Agency Standing Committee, has published a detailed account of measures under discussion to prevent “transgressors” being re-hired

It has been four years since the United States first announced it was using airstrikes against so-called Islamic State in Iraq, an operation that began near Erbil. Other countries later joined the anti-IS coalition in Iraq and Syria. Nearly 30,000 airstrikes plus plenty of ground fighting later, the militants now hold little in the way of territory and are on the back foot. But, as casualty monitor Airwars points out, civilians paid dearly for the liberation of cities like Raqqa and Mosul. Counting casualties in war is tricky, but Airwars estimates that between 6,500 and 10,000 civilians were killed in coalition air and artillery strikes. The coalition puts the numbers much lower, at just over 1,000, but Amnesty International this week said its own investigations had prompted the US-led coalition to admit that its aerial bombardments during the Raqqa offensive killed 77 civilians. And the human rights watchdog says that’s likely just “the tip of the iceberg”. Meanwhile, without any major cities to its name, IS is reverting to the horrifying tactics that first brought it notoriety: executions and kidnapping minorities.

On a related and similarly morbid topic, humanitarian situations that ought to ring alarm bells don't do so because mortality data is badly calculated on the basis of a 30-year-old benchmark, according to researcher Fabrice Weissman. What makes a crisis severe is the numbers dying. As people still die of natural causes, emergency workers need to know how many deaths are above normal. To do this, they calculate the crude mortality rate (CMR) of "deaths per 10,000 per day". Many humanitarian organisations work on the basis that a rate of one or more death per 10,000 per day is an emergency. (It can get worse than that: UNHCR benchmarks say 5/10,000 per day is a "major catastrophe"). (This primer from think tank ODI can tell you more.)

In a new blog, MSF veteran Weissman says the 1/10,000/day threshold is based on the assumption that twice the underlying rate should count as an emergency. But he finds that the underlying rate (0.5/10,000/day) was based on a US review of routine mortality rates in various African countries in the 1980s (which may have since halved). A more careful application of the benchmark should, where possible, be set at double the real normal rate in the surrounding population but too often is not, Weissman suggests. (This is also recommended by the Sphere humanitarian standards group). Taking the example of northeastern Nigeria, he cites an MSF study where people displaced by the Boko Haram insurgency had a mortality rate of more than double the local population (0.41 compared to 0.19) but since neither passed the 1/10,000/day cutoff, field teams couldn't convince their management that the situation was as serious as it really was. Weissman writes that this issue is "highly political" as it defines what is "excessive" and therefore requiring exceptional action. He has a simple proposal: cut the threshold in half.

In case you missed it, 6 August-10 August

Indonesia: The death toll continues to climb after a 7.0-magnitude earthquake struck the Indonesian island of Lombok on 5 August, but the government has so far “strongly” declined international aid, according to the AHA Centre, a regional inter-governmental disaster coordination agency. The government says at least 321 people have died. Yayasan Sayangi Tunas Cilik, a local NGO, says communities an hour’s drive from the district capital in North Lombok have been cut off by landslides and are living in tents without any help.

South Sudan: Rival leaders in the world’s youngest country may have taken another step towards ending one of the world’s most brutal and devastating civil wars by signing a deal on power-sharing and governance that’s meant to pave the way for a comprehensive peace accord. President Salva Kiir and rebel leader Riek Machar expressed regret for the “untold human suffering” their rivalry has brought about since December 2013, but similar deals in the past have done nothing to end the killing, so optimism over this new document is at best “cautious”. Look out for our upcoming analysis.

United Nations: UN Secretary-General António Guterres has nominated Michelle Bachelet to be the organisation’s top human rights official. If approved by the General Assembly, the two-time president of Chile will succeed Zeid Ra’ad Al Hussein as High Commissioner for Human Rights. Zeid has been an outspoken critic of powerful countries, and chose not seek a second four-year term, saying last December that doing so “might involve bending a knee in supplication”.

Yemen: On Thursday morning, a bus carrying children in a Houthi-controlled area in northern Saada province was hit by the Saudi Arabia-led coalition, killing dozens. According to the International Committee of the Red Cross, the official toll is 51 dead, including 40 children, as well as 79 wounded, 56 of whom are children. The coalition said in a statement that the strike was a “legitimate military action” aimed at rocket launchers used to strike Saudi Arabia, and accused the Houthis of using children as soldiers and human shields.

Briefing: Another Ebola outbreak, this time in a conflict zone

The Democratic Republic of Congo has more experience than any country when it comes to tackling Ebola. The latest outbreak, announced on 1 August, is its 10th since the virus emerged in the country (near the Ebola River) in 1976. Gabon, Sudan, and Uganda would be next on that list, with three major outbreaks apiece. However, this time around, there’s an added problem: it broke out in North Kivu Province, where dozens of armed groups operate and where decades of conflict have devastated key infrastructure. Hopes are high that the vaccine that may have helped quickly contain the previous outbreak last month in Equateur Province can do the same now. But, as our weekend read spells out, tracing all those who have come into contact with suspected cases in the midst of an active warzone and then vaccinating them in time may not be possible. There are also large population centres nearby, and international borders. As of Friday, the outbreak had claimed 37 lives (nine confirmed as Ebola, 28 still being verified), but it’s worth getting up to speed now in case things get worse from here. 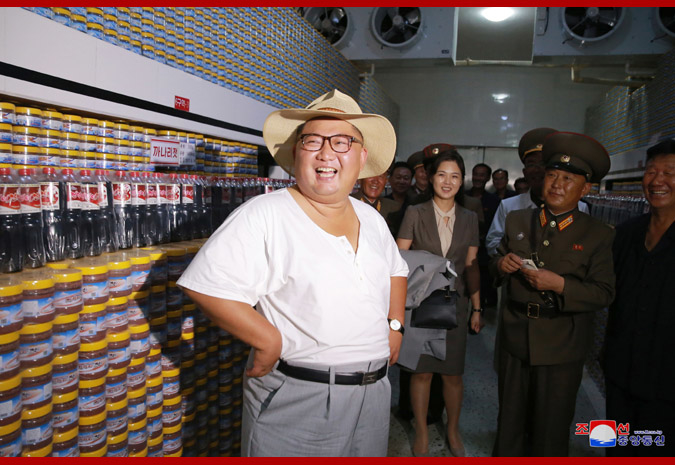 You can leave your hat on

We don’t strive to be your go-to source for sartorial matters here on the Cheat Sheet (well, sometimes we do), but we couldn’t help but take note of North Korean leader Kim Jong-un’s slimmed-down wardrobe. Pictures published in state media this week show Kim ditching his usual Mao suit for a loosely buttoned white T-shirt and a breezy hat. Blistering heat waves around the globe have also hit North Korea, which likely has something to do with Kim’s recent fashion choices. But more importantly, humanitarian groups warn the soaring heat is likely to wither crop yields in a country where chronic food insecurity and malnutrition are widespread. And, as we pointed out last month, the UN’s Food and Agriculture Organization was already projecting a 652,000-tonne cereal shortfall, in part due to low rainfall and soaring temperatures earlier this year. State media have called the heatwave an “unprecedented natural disaster”. The UN’s humanitarian aid chief, Mark Lowcock, recently warned of declining aid funds for North Korea, but such entreaties haven’t been enough for donors to overcome years of misgivings: this year’s UN-wide appeal for North Korea is only 10.8-percent funded – the second-lowest commitment to any emergency.