Here in the Rohingya refugee camps, where flimsy shelters sprawl over steep hillsides and floodplains, aid workers and residents have been reinforcing bamboo tents, clearing land, building new roads and bridges, and storing emergency supplies ahead of the monsoon and cyclone season.

But with a severe shortage of space and no evacuation plan or storm shelters available for the vast majority of people, camp residents and humanitarian groups fear weeks of work may prove futile as the rains start to arrive and become heavier over the next few months.

Aid groups say slow government approval for key preparedness projects has impeded their work, and warn that a worst-case scenario could trigger “a massive loss of life” among the almost 900,000 Rohingya, including the more than 686,000 new refugees who fled a military crackdown in Myanmar’s Rakhine State last year.

Heavy rain and winds, commonly seen during the season, could wash away infrastructure like toilets, health clinics, and schools, cut off large parts of the camps from aid, and exacerbate the already problematic health situation.

Aidan Gromoll, site coordinator for DocMobile, which provides volunteer medics to clinics in the camps, warned that submerged and impassable roads and pathways could put refugees beyond the reach of aid.

All aid operations at risk

Cox’s Bazar, where the majority of Rohingya refugees are concentrated, sees some of the country’s most substantial rainfall, with the heaviest downpours expected from June through August. The threat of tropical cyclones, which peaks now, and again in October and November, adds to the risks of the season.

Cyclones can wreak havoc in densely populated Bangladesh, and the areas around coastal Cox's Bazar have been a frequent target. Only a year ago, Cox’s Bazar was struck by Cyclone Mora, which destroyed up to a quarter of homes in the camps, according to the International Organisation for Migration.

Since then, many of the hundreds of thousands of new refugees have dug homes into precarious hillsides and flood-prone land that local Bangladeshi communities have avoided settling on. 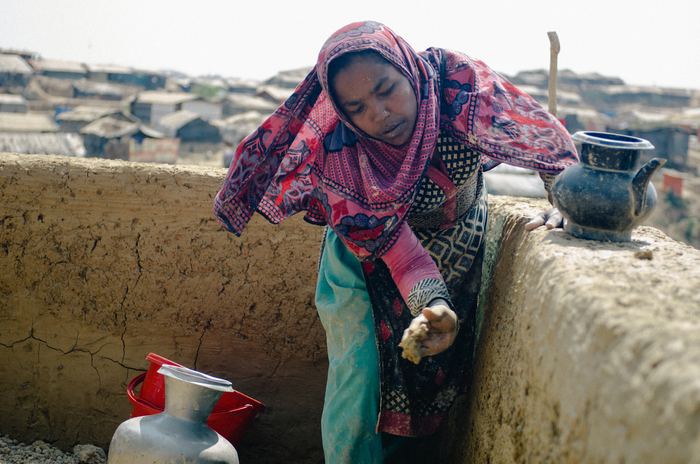 Kaamil Ahmed/IRIN
Shafiqa, a 25-year-old single mother of two who fled to Bangladesh last year, builds a mud wall to protect her home from high winds.

Earlier this year, a risk assessment of the Kutupalong Refugee Camp, home to more than 600,000 of the Rohingya, estimated that landslides and floods could directly impact more than 100,000 people.

“In any disaster, people need to get to safer grounds,” said Caroline Gluck, spokeswoman for the UN’s refugee agency, UNHCR. “The problem is there are very few places for people to go to. Where do they run to when they need to protect themselves and their families?”

Overall, Gluck said more than 150,000 refugees are vulnerable to floods and landslides.

The World Health Organisation says one quarter of the camps’ health facilities are at risk, which will make it even more difficult for a “grossly underfunded health sector” to reach refugees during the height of the monsoon rains. Safe water sources could be destroyed and latrines could quickly overflow – the risk assessment estimated one quarter of both are vulnerable. This increases the chance of disease outbreaks.

“Without a rapid comprehensive health response, there will be massive loss of life during [the] monsoon,” the WHO said in an update to donors this month, which warned of “mass casualties” and “a sharp increase” in maternal and newborn deaths.

Aid groups say risks posed by the monsoon season cut through all of their operations: delays from weather and damaged infrastructure will impact food distribution and almost one third of the makeshift schools are in jeopardy. And the risk of violence against women and children is also expected to rise, even as support is already in short supply.

Extensive work is under way in parts of the camps to sandbag pathways on landslide-prone areas, dig drainage to redirect water, store emergency supplies, and build roads and bridges to help ensure that aid in the forms of goods and services can continue.

For 15,000 refugees now settled in areas most vulnerable to monsoon damage, new land is being cleared for living quarters, including about 50 hectares grafted onto the Kutupalong camp. 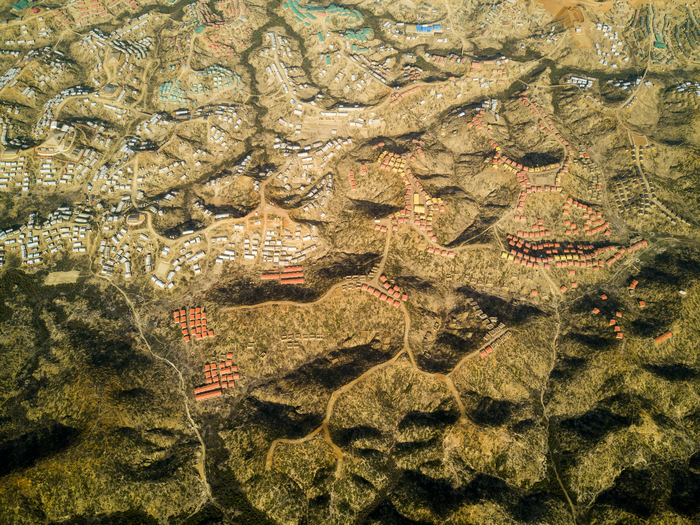 Roger Arnold/UNHCR
An aerial view over Kutupalong camp shows new shelters being constructed for refugees relocated from old shelters at risk of flooding.

The fragile bamboo tents that are home to most of the refugees are being reinforced, as are communal buildings that could serve as emergency shelters. Aid groups say they’ve distributed extra supplies to 66,000 households as of mid-April – about one third of the total households in the refugee camps.

Schools, health facilities, latrines, and other infrastructure that may be at risk of damage have been identified by aid officials. Hundreds of latrines and water sources that are most vulnerable have been decommissioned, and others have been built elsewhere.

Time is running out, though, and humanitarian groups say bureaucracy and funding shortages have not helped. Aid workers say government approval for NGO projects has been achingly slow. “Sector partners are underfunded and over-stretched to be able to cater for the immediate need of assessing and upgrading community shelter structures,” states a recent situation report by the Inter Sector Coordination Group, which represents the numerous aid agencies working in the camps.

Evacuation is not an option

While Bangladesh has a robust early warning and preparedness system – a direct response to earlier deadly cyclones – there’s little room for sturdy cyclone shelters in the densely packed Rohingya camps.

Evacuation is not an option for the vast majority of people in the settlements.

“At present, refugees are limited to bamboo and tarpaulin shelters; they have nowhere to escape high-wind events like cyclones,” the situation report states.

Gluck, the UNHCR spokeswoman, said communal spaces like mosques and schools have been identified as emergency shelters but can only house around 30,000 people. “We won’t have enough land to relocate everybody, and that poses a serious risk," she said. 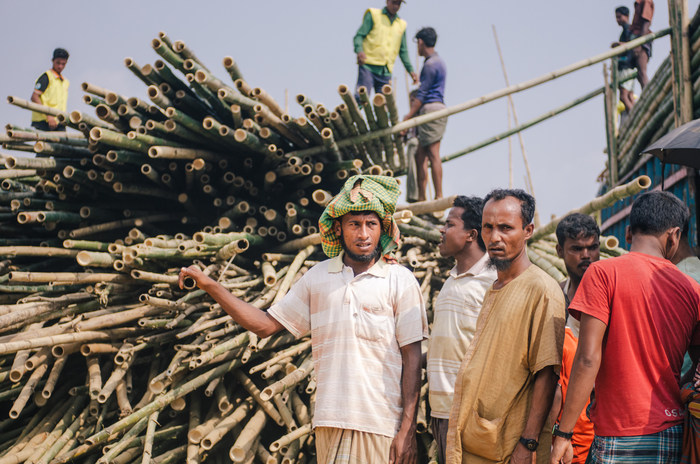 Kaamil Ahmed/IRIN
Rohingya men wait at a distribution point for extra bamboo to strengthen their homes ahead of the coming monsoon season. Authorities are encouraging Rohingya families to reinforce the fragile bamboo tents that are home to most of the refugees.

Emergency shelter experts warn that even these structures – often made from the same materials as the fragile tents – are far from ideal. A guideline on strengthening communal buildings in the camps notes: “It is very unlikely that any bamboo community structure will survive a cyclone.”

For many, it’s a question of choosing among the only available options.

“I think everyone is aware that this is not going to be sufficient, but there’s no alternative that seems better than this,” said Mélody Braun, who works with the US-based International Research Institute for Climate and Society and leads a team focused on Bangladesh.

She warned that a rush to fill a limited number of spaces in the shelters may be a danger in itself. “Having people panicking and trying to gather in a space that’s not big enough for all of them might in itself be very dangerous, specifically when a cyclone is coming,” she said.

“There’s nothing else I can do”

Aid groups and authorities have been trying to cut through language difficulties and the sheer size of the camps to reach Rohingya and communicate information on how to prepare.

In recent surveys of camp residents, more than 40 percent of respondents said they didn’t know how to strengthen their homes and many expressed confusion about whether cyclone shelters would be available.

On a recent morning, Mohammed Nur Kabir, who fled to Bangladesh in 2016, before the latest Rohingya exodus, said that no one has helped him prepare for the monsoon season this year. 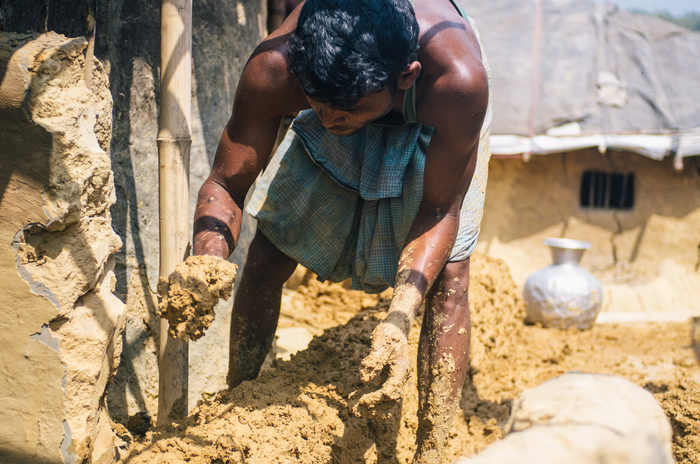 But last May he saw firsthand what happened in the camps during Cyclone Mora. “There's no shelter here from the wind,” he said. “My roof was blown off twice," he added, as he perched beside his home on the edge of a plateau. "My wife was pregnant; everything was wet; my children were always soaked and ended up with breathing problems."

He stood knee-deep in a pool of mud, which he slapped around the edges of his tent two handfuls at a time. He has little faith the mud barrier he’s building around his home will protect his family when the rains come.

"I don't think these walls will do much, but there's nothing else I can do," he said.