As Patrick Ndong was getting ready to leave home for his poultry farm in the Cameroonian commune of Akwaya, a group of soldiers stormed into his compound and began shooting in the air.

Ndong took to his heels, but as he did so he could see soldiers dragging young boys from the village into a waiting van.

“They [the boys] were shouting for help,” Ndong told IRIN. “One woman was crying and rolling on the floor because her son had been shot.”

Like many others who fled Akwaya in English-speaking southwest Cameroon, Ndong spent three days in the bush before crossing the border into the tiny Nigerian village of Utanga, in Cross River State.

“I had to eat leaves to survive,” said Ndong, a livestock breeder. “I’ll never forget the day soldiers totally destroyed my life.”

That was on 1 October, the day when thousands of Cameroonians in the two English-speaking regions took to the streets demanding secession from the rest of the majority Francophone country.

The security forces responded with violence. Just in Bamenda, the capital of Northwest Region, Amnesty International said 17 people were killed. There is now mounting concern that Cameroon’s “anglophone crisis” is spinning out of control.

The refugee flow from Akwaya - a collection of villages sandwiched between Nigeria and Cameroon - and other locations in western Cameroon, is just one example.

At least 20,000 people are currently sheltering in a string of communities in Nigeria’s Cross River state, according to state government officials.

“The influx of people has not ceased yet,” John Inaku, the director-general of the State Emergency Managing Authority told IRIN. “They are still coming in, even up till this morning.”

The UN’s refugee agency, UNHCR, said last week that 5,000 people had been registered or were awaiting registration, but added that it was working on a contingency plan of up to 40,000 people crossing into southeastern Nigeria.

“Our fear, however, is that 40,000 might actually be a conservative figure in a situation where the conflict might continue,” warned UNHCR spokesperson Babar Baloch.

Tensions are indeed increasing. On Tuesday, two Cameroonian gendarmes were killed in Bamenda in an overnight raid on a security checkpoint, reportedly by English-speaking separatists. A third officer was killed in an ambush on a patrol an hour later.

No one yet knows how many people died in Akwaya, but “the government has forced our people into carrying arms,” said 39-year-old Solomon Ode, who fled to Utanga last month. “This is going to turn into a full-blown war.”

Activists of the Southern Cameroonian United Front had warned for months that they would symbolically declare Northwest and Southwest Cameroon the so-called independent Republic of Ambazonia on 1 October.

There were large protests in support across the regions’ major towns, but it was in places like Akwaya where some of the worst violence was committed by the security forces, and which went largely unreported.

“We wanted to tell the world that we are no longer slaves of Cameroon,” said John Tita, who marched with protesters in Buea, the capital of Southwest Region, before returning to Akwaya later in the day to find his house destroyed, allegedly by the army.

One woman told IRIN her 14-year-old son was shot by soldiers inside her compound in Akwaya and was then taken away. “I don't know if he's dead or alive,” she said. “There was blood all over his body.” 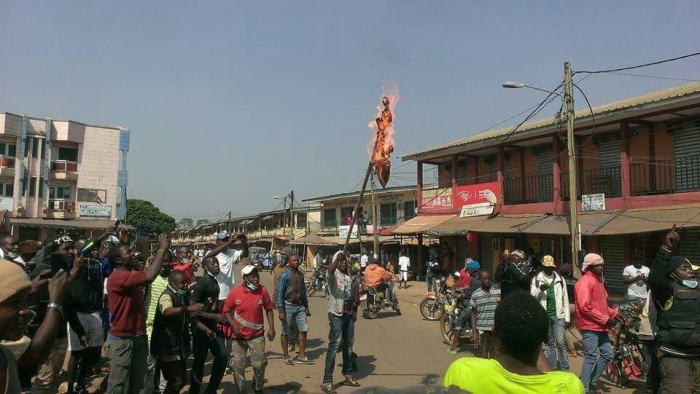 Anglophones make up roughly one fifth of Cameroon's population of 23 million. Originally part of British-administered Cameroon, the previously separate region voted to join the rest of the country in 1961. But they have complained of discrimination and marginalisation for decades.

Over the last few years there have been increasingly loud calls for a return to a pre-1972 federal constitution and greater self-governance for western Cameroon.

The tempo of dissent increased in November last year when lawyers in Bamenda protested against the Cameroonian government’s decision to appoint anglophone magistrates who had no training in the British common law used in the western regions. They were joined by teachers similarly opposed to the appointment of francophones in English-speaking schools.

The security forces arrested at least 100 people as the protests degenerated. A month later, police opened fire on a demonstration killing four people.

The government has labelled the demonstrators terrorists. It has tried to snuff out the unrest with mass detentions. Earlier in the year it cut the internet to western Cameroon for three months, arguing that social media was being used to fan the disturbances.

The government’s heavy-handed approach has eroded both domestic and international support – with Western governments condemning the shooting of protesters in Bamenda last month.

The United States said the government’s “use of force to restrict free expression and peaceful assembly” was unacceptable, while and the United Kingdom called for restraint, urging all parties "to reject violence, embrace dialogue".

Anglophone bishops have kicked back against “the barbarism and the irresponsible use of firearms against unarmed civilians by the forces of law and order”.

The government has denied the allegations of deliberate killings by the security forces. Communications Minister Issa Bakary Tchiroma said it was propaganda by the secessionists to “carry out their evil intentions to destabilise Cameroon”.

The United Nations and the African Union have both called for talks to end the crisis – a call supported by Ben Ayade, the governor of Cross River State.

“Any form of relocation of a people, no matter how temporary, is a failure of the world to address the issues,” he said last week.

But IRIN found little appetite for dialogue among the Akwaya refugees.

“It is Ambazonia or nothing,” said one man supporting the separatist cause who asked not to be named. “The government in Yaoundé has been killing our people like ants.”

“How many times do we have to negotiate with the government?” asked Ode, who warned of civil war. “We’ve been talking with them [the government] since 1961, but they don’t see anything good about anglophones.”

Bernard Chongo, who used to work in an orphanage in Akwaya, believes the crisis is likely to get worse.

“I pray every day for Cameroon,” he said. “[But] the way things are, only a miracle will prevent a civil war.”