Cameroon’s anglophone crisis reached a new low at the weekend when at least 17 people were shot dead by security forces and 50 wounded, according to Amnesty International.

Protesters had gathered in towns across the country’s two English-speaking regions to mark a symbolic declaration of independence, and were confronted by police firing tear gas and live ammunition in running battles.

There has been an 11-month trial of strength between the authorities in the majority francophone country and English-speaking protesters, who are angry over alleged discrimination, and the marginalisation of their two regions – North West and South West Cameroon.

The agitation has deepened from a demand to return to a long-abandoned federal system, to increasing calls for outright secession. In the confrontation at the weekend, protesters hoisted the blue-and-white flag of the self-styled Republic of Ambazonia.

The crisis began last year with protests by lawyers and teachers over the influence of French in court rooms and schools. The root of the grievance includes anger over the region’s under-development, its lack of political representation, and the perceived erosion of an anglophone cultural heritage.

The government has labelled the demonstrators terrorists. It has tried to snuff out dissent with hundreds of arrests. Earlier in the year it cut the internet to western Cameroon for three months, arguing that social media was being used to fan the unrest.

Language of peace hard to find as Cameroon crisis festers

Those tactics have served to further impoverish the west. The so-called “ghost town” stayaways are also increasingly being enforced by violence.

President Paul Biya, 84, who has been in power for 35 years, has described anglophone activists as “extremists” and any division of Cameroon as non-negotiable.

As positions harden, there is narrowing space for dialogue.

On Monday, a day after the clashes, shots could still be heard, with the government declaring a day-time curfew in the city of Bamenda, the capital of the North West region.

The country’s linguistic divide dates back to 1961, when the British-administered Southern Cameroons united with Cameroon after it gained independence from France in 1960. It was a federal state until 1972.

Here’s a timeline of the ensuing discord: 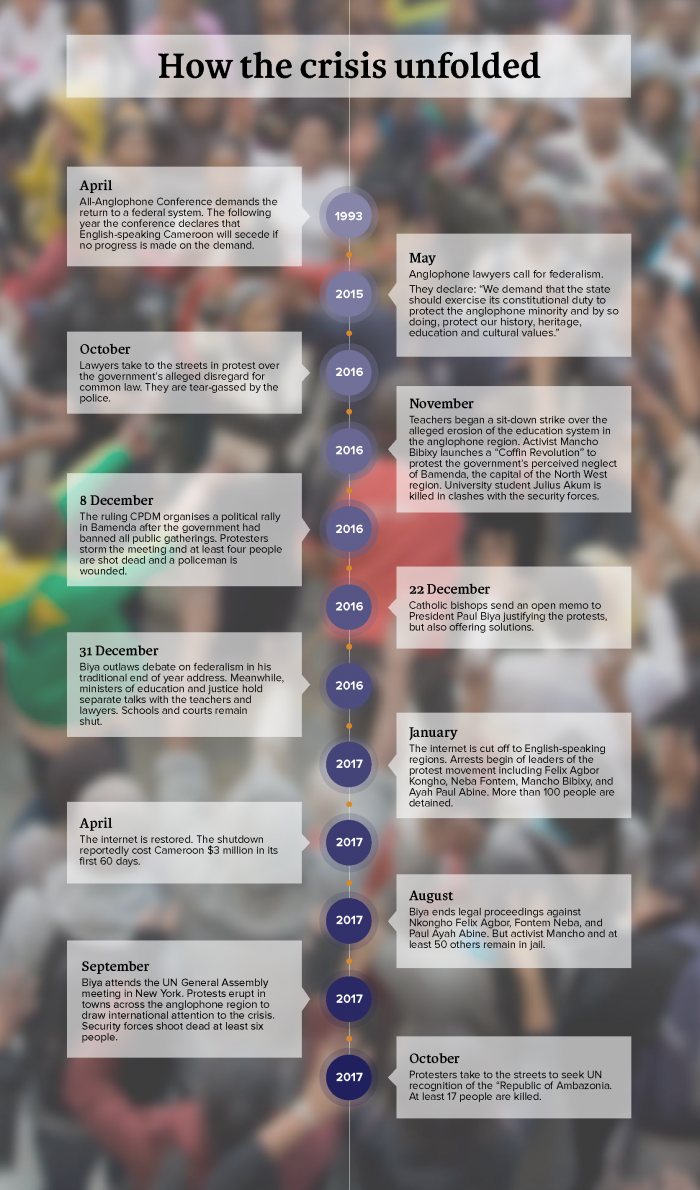