Myanmar plans to open new displacement camps for Rohingya in violence-ridden Rakhine State, sparking fears that members of the Muslim minority not already driven out of the country will instead be forcibly interned.

More than 420,000 Rohingya – around two thirds of the ethnic minority’s estimated population in northern Rakhine State – have fled to Bangladesh this past month amid a military crackdown prompted by a Rohingya militant group’s coordinated attacks on 25 August. Refugee witnesses say security forces killed fleeing civilians before razing villages to the ground in what rights groups are calling a “scorched-earth campaign”. The UN has said it bears the hallmarks of “ethnic cleansing”.

Besieged by international condemnation for the humanitarian emergency it has unleashed on Bangladesh, Myanmar has announced it will open seven new displacement camps in northern Rakhine as a remedial solution.

“The temporary camps are for Bengalis,” Zaw Htay, the government’s spokesperson told IRIN, using the state’s preferred terminology for Rohingya, which implies they are illegal immigrants from Bangladesh.

“The local indigenous people can go back to their villages.”

The Muslim Rohingya population formerly made up the majority of the three northern Rakhine State townships. Last week, the government announced that 176 out of 471 Muslim villages have been fully deserted, and 7,000 homes, mostly in Rohingya villages, have burned down. Just four non-Rohingya villages have completely emptied. The government says that more than 4,000 ethnic Rakhine, out of around 30,000 Rakhine and other non-Rohingya who were also displaced in the violence, have been escorted back to their villages.

Aid groups estimate more than 100,000 Rohingya are still trapped in northern Rakhine, struggling to cross land-mine riddled borders or the Naf River to join the swelling tent cities in Bangladesh.

Zaw Htay said the seven new camps would be a temporary solution for Rohingya still in Rakhine – as well as a place to house any refugees who return from Bangladesh.

In her first public address on the unfolding crisis, Myanmar’s leader Aung San Suu Kyi acknowledged on Tuesday that “hordes of refugees” have fled northern Rakhine. She condemned all violence, but stopped short of censuring the military crackdown, saying only that there have been many “allegations and counter-allegations”. 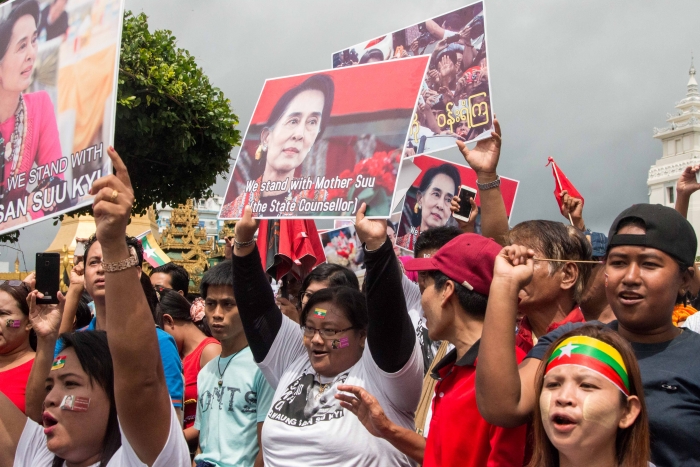 “There has been a call for repatriation of refugees from Bangladesh,” Aung San Suu Kyi said during her speech, which was given in English and broadcast on a large screen in downtown Yangon. “We are prepared to start the verification process at any time… those who are verified as refugees from this country will be accepted without a problem.”

However, this is likely to prove difficult. Rohingya have routinely been denied citizenship in Myanmar and systematically stripped of documentation, even though many say their families have lived in the area since before the borders of colonial Burma, as the country was then called, were drawn.

The government’s planned IDP camps would see Rohingya return on top of the charred remains of their former villages. Satellite imagery analysed by Human Rights Watch and Amnesty International, along with reports of fires tabulated by Arakan Project, a monitoring group, revealed that at least five of the seven new IDP camps would be located around former Rohingya hamlets that have recently been razed.

Villagers from Taung Pyo Let Yar, in Rakhine’s Maungdaw township, watched from a hill in Bangladesh as their homes were engulfed in flames on 13 September, according to Human Rights Watch. Days earlier, Myanmar announced on a government Facebook page and in state media that it would build an IDP camp at Taung Pyo Let Yar.

The proposal for new displacement camps rings alarms for rights groups, given the precedent set further south along the coastline, where 121,000 people, mostly Rohingya, remain confined in squalid, overcrowded government camps. They’ve been trapped there for five years after they were segregated into temporary shelters erected in the wake of sectarian violence in 2012.

Rather than offer protection, the camps in central Rakhine have become what activists call an “open-air prison”, enclosed by barbed-wire barricades and overrun with security forces. No one can move in or out without permission. Aid groups struggle to fill vast inadequacies, anger and desperation are palpable, and deaths by treatable illnesses are all too common. Rights activists and aid groups fear this will become the blueprint for the wider incarceration of the whole ethnic minority.

“While we welcome any effort to ensure that displaced communities and people in need can access humanitarian aid and assistance, this must not be a repeat of 2012,” said Laura Haigh, Myanmar researcher for Amnesty International.

Before he was placed in an IDP camp in 2012, Adu Rahman, 36, was a fish seller in the state capital, Sittwe, where Muslims and Buddhists used to live side by side. After the violence, police closed all Muslim stalls and shops. Now, Rohingya have to survive on rations.

“They have made animal lives for us,” he told IRIN.

Almost all humanitarian activity, including lifesaving treatment for malnourished children, remains suspended or curtailed throughout Rakhine. In Muslim-majority northern Rakhine, much of the aid work was hampered even before the military launched its crackdown in August.

The government has said it will take over aid delivery in conjunction with the Red Cross Movement.

“This suggests Myanmar is moving towards a new modus operandi putting the delivery of humanitarian aid under the government’s exclusive control, which is likely to result in even more severe administrative and access constraints than ever,” Benoit De Gryse, MSF’s operations manager for Myanmar, said in a statement.

The government spokesman, Zaw Htay, told IRIN that the “Red Cross would provide assistance” in the new camps, though a spokesperson for the International Committee of the Red Cross said it has not discussed camps with the government.

The new camps will also create new vulnerabilities, experts say, including a captive population reliant on humanitarian assistance for survival. Yet aid delivery in Rakhine has historically been subject to capricious obstacles and life-endangering policy shifts – including previous expulsions of some organisations.

The volatility of this dynamic was recently on full display at the existing camps in central Rakhine, where aid access has been severely disrupted since the 25 August attacks. Travel authorisations for international staff have been delayed or outright denied, while the recent escalation of a hostile, anti-aid worker climate has kept local staff at home for fear of recrimination.

Aid began to resume in a slow trickle last week. But without humanitarian staff to distribute the rations, the delivery to individual families has been further waylaid, camp residents told IRIN.

"Our own Rakhine staff are afraid. It has become almost taboo for them to work for an aid organisation"

The camps’ threadbare health clinics have also been closed, or else are operating drastically understaffed. No government doctors have been in the camps since 25 August, according to health volunteers who are left to fill the gap despite their limited training. MSF has said its mobile clinics, emergency transportation services, and treatment of tuberculosis patients throughout the state have all been on hold since mid-August.

Adu Rahman, the former fish seller, said he has been unable to get his asthma medicine for the past month because he needs a doctor to renew his supply. But he said NGO doctors have only resumed coming to one clinic far from his IDP camp, and only for two hours in the morning. He and his family of six, including a four-month-old baby, have also yet to receive their food rations.

“We have to struggle every day just to survive,” he said.

Health staff have told IRIN that ambulances will not travel in or out of the camps without a security detail, all but preventing transfer to Sittwe General Hospital – the only hospital where Rohingya are permitted to receive treatment. At least four people, including a stillborn baby, have died in in the last month in the Sittwe camps due to the nonfunctional referral system, according to medical records seen by IRIN.

After the 25 August attacks, a government-run social media account linked aid agencies to Rohingya “terrorists”, as it calls the insurgents, posting pictures of WFP biscuits found at an alleged militant camp. State media claimed aid workers took part in a terrorist raid, and posted pictures of alleged insurgents wearing a backpack with an aid group’s logo.

These messages were slammed internationally as “irresponsible”, unnecessarily endangering the lives of humanitarian staff and exacerbating local tensions. Aid workers believe it was a deliberate attempt to constrict humanitarian activities.

“They’ve created an impossible environment for the aid sector,” one aid worker said bleakly. “Our own Rakhine staff are afraid. It has become almost taboo for them to work for an aid organisation.”

Letters have circulated on social media and around central Rakhine threatening those who are seen supplying, renting to, or assisting international groups.

Oxfam’s country director Paul Joicey said a local partner organisation was targeted: “Their office sign board was brought down and they have been evicted from their office.”

Local media reported that Rakhine extremists cut the hair of a woman thought to have sold supplies to Rohingya and made her parade around town with a sign that read “traitor”.

With communal hatred running at such a fever pitch, aid workers fear it will be impossible to return to even the previous, precarious status quo.

In interviews with IRIN, several NGO and aid officials called this the “end days” for the long-simmering Rakhine crisis, while Rohingya in the camps around Sittwe expressed hopelessness at seeing their lives and futures destroyed.

“If the NGOs are completely kicked out,” said Mohammad Alam, a camp resident, “we might as well dig our own graves.”