These are the latest casualties of demonstrations that have brought the summer capital of India’s restive state of Jammu and Kashmir to a standstill. The unrest was ignited by the killing by government forces in early July of Burhan Wani, a key militant leader in Muslim-majority Indian-administered Kashmir. At least two Indian security officers and more than 80 civilians have been killed and the toll is mounting almost by the day.

Security forces fire lead pellets from pump-action shotguns at stone-throwing protesters, often at close range. Several people have been killed by the supposedly non-lethal pellet guns, while hundreds have been blinded and thousands more injured.

In a 21 September ruling, the Jammu and Kashmir High Court declined to prohibit the use of pellet guns. 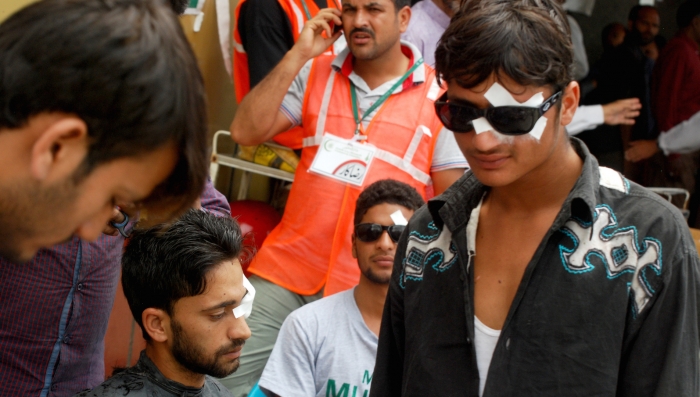 India’s use of the weapons has garnered widespread condemnation and Home Minister Rajnath Singh said during a mid-August visit that security forces could be issued with alternatives such as chili-filled grenades.

At publication, the home ministry had not replied to requests for comment, but there is no evidence that the pellet guns will be taken out of action any time soon. A volunteer helping injured protestors at the hospital said up to two dozen people still show up every day with pellet wounds.

“We are angry because our children are being injured, and if there is no dialogue, this situation will continue,” said the volunteer, who requested his name be withheld.

That’s an increasingly common sentiment here. As the region ruptures with popular protest against heavy-handed Indian rule, there is a growing clamour for talks about who has the right to govern this rugged valley in the Himalayas. If dialogue fails – or fails even to take place – Kashmir is destined to remain contested, and half a million Indian soldiers will continue to fight insurgents and face off against protestors every few years.

Unfortunately, the key players do not seem inclined to negotiate a way out of the 70-year cycle of conflict.

Pakistan, which administers part of Kashmir, has a long history of backing militant groups against India. The two countries have fought two of their three major wars over control of the region. An attack by militants this month on an Indian army base that killed 19 soldiers has only heightened tensions between the two nuclear-armed nations, and negotiations seem as out of reach as they have ever been.

Last month, the All Parties Hurriyat Conference, an alliance of pro-Kashmiri independence groups, refused to meet with a government delegation that had travelled to Srinagar from Delhi.

Explaining why the APHC refused to meet the delegation – led by Singh, the home minister – Hurriyat spokesman Ghulam Muhammad Ganai said the government must first admit the basic fact that Kashmir is a disputed territory.

"India is not ready to initiate dialogue and it is very adamant about Kashmir being an integral part [of its territory],” Ganai told IRIN. “It is also insisting that Pakistan vacate the territory [that India] calls Pakistan Occupied Kashmir.”

There’s no chance that Pakistan will cede the area it governs to India, as both countries claim the territory in its entirety. 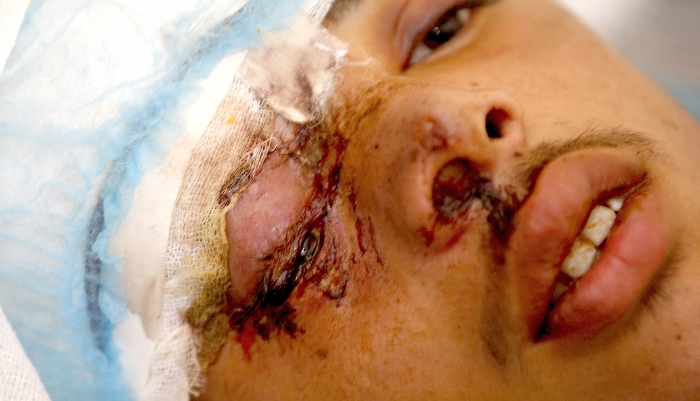 Leaders from the rival countries have been sparring on the international stage since the 18 September attack that killed Indian soldiers at a base in the town of Uri.

In a speech at the UN General Assembly last week, Pakistani Prime Minister Nawaz Sharif called for an investigation into abuses and atrocities committed against civilians by Indian “occupation” forces, which he accused of repressing Kashmiris’ struggle for self-determination.

Gull Wani, a political science professor at Kashmir University, told IRIN that the “humanitarian issues of Kashmir” had slipped into the background since the Uri attack. “Even the separatists have become hawkish, and the only casualty is the people of Kashmir.”

A region on edge

In this state, where 70 percent of residents are Muslim and the remainder predominantly Hindu, last Friday’s prayers at Srinagar’s main mosque were suspended again for the 11th week in a row. The same day, another protester was shot and killed.

Members of the Central Reserve Police Force told IRIN anonymously, as they were not authorised to speak to media, that they only use the guns as a last resort when one of their members is in serious danger of being injured by a mob.

Protesters deny that security forces are taking such precautions, and those injured by pellets keep arriving at Shri Maharaja Hari Singh Hospital. Meanwhile, soldiers kitted-out in riot gear patrol the downtown where shops are shuttered.

Curfews have been variously imposed and lifted since the unrest began. But business isn’t on hold simply because of the government’s emergency measures. The pro-independence Hurriyat coalition has also been orchestrating widespread “strikes”.

The coalition releases a schedule at the beginning of every week, which has been negotiated with shopkeepers, telling residents when businesses will be allowed to open, usually for a couple hours at a time. There was excitement on Sunday, as stores in the city centre were finally allowed to come back to life all afternoon and evening. 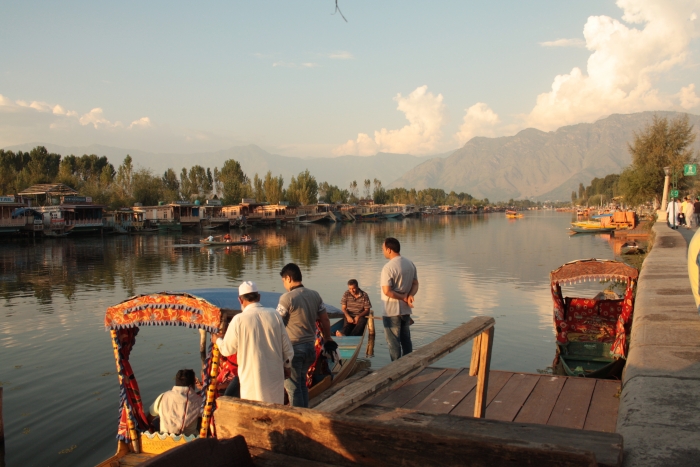 Nimisha Jaiswal/IRIN
Dal Lake in Srinagar is usually packed with tourists in summer, but civil unrest has kept them away

But that sense of normalcy is fleeting these days, and no ones knows when violence could erupt again. In the absence of meaningful peace negotiations, the only certainty seems to be that the conflict will continue as it has done for decades.

“The people of Kashmir have become a football between India, Pakistan, Hurriyat, and the army,” said Ajam Khan, who owns a boat on Dal Lake, a now-deserted tourist attraction. “We want a solution now. We want this sacrifice to be worth something.”