Hunger in Zimbabwe is seen overwhelmingly as a rural problem. Consecutive droughts have scorched harvests, and as a result 4.1 million people – half the rural population – are expected to be in need of food aid next year.

But the blinding focus on the countryside obscures the struggles of the urban poor; of people like Ruramai Chakanyuka, who sells fruit and vegetables in the centre of the capital, Harare.

What she earns is barely enough to support her two children, even though she supplements her income as best she can by growing maize illegally on municipal land.

“Our government welfare system has virtually collapsed,” she told IRIN. “It can’t come to the rescue of those who don’t have enough food to eat.”

The reality is that nearly everybody is hurting in Zimbabwe.

A 20-year economic crisis has seen de-industrialisation, and the hollowing out of what was once a robust public sector. More than 80 percent of workers are employed in the informal economy; the formal job market is not only small but still shrinking, with fresh layoffs announced at the beginning of the year by major parastatal firms.

Anger over the level of poverty, failed government policies, and corruption has seen a growing tide of urban protest this year. The latest example came on Wednesday: six hours of skirmishes with the police in Harare in which shops owned by the vice president and other senior officials were looted.

A less incendiary response by the urban poor has been to simply quit the cities. With no opportunities in sight, some are reversing the traditional pattern of rural-urban migration and heading back to the land, despite the difficulties farming is facing.

“Households that are failing to sustain themselves are sending some of their members to rural areas to reduce their monthly household expenditure obligations,” Tafara Chiremba of the Poverty Reduction Forum Trust, an anti-poverty NGO, told IRIN.

James Maridadi, an MP for the opposition Movement for Democratic Change, described conditions in his largely urban and low-income Mabvuku/Tafara constituency as “desperate”.

“Except for a few who are lucky to be employed, the majority of people survive on vending fruit, vegetables, second-hand clothes, or anything that they can sell,” he said.

“Others depend on seasonal rains to plant crops on public spaces while others depend on remittances from other countries. The government needs to focus on urban areas as well when distributing food relief,” he urged.

According to Joao Manja, the head of the World Food Programme’s vulnerability analysis unit, food security in urban areas is generally based on access to cash. “Without cash or options for labour, it becomes a big challenge for those living in urban areas to be food secure.”

A comprehensive urban food security assessment has been launched by WFP, but interventions are already being made to reach vulnerable, malnourished children who are being treated for TB and HIV.

“They are receiving support at two clinics in Harare, and all the hospitals in [the southern city of Bulawayo],“ Manja told IRIN. “The programme should reach more than 30,000 clients by March 2017.”

Worse in the countryside

While hardship in urban areas is difficult for aid organisations to identify and harder to target, it is well mapped in the countryside, where the majority of Zimbabweans still live. The figures are alarming. 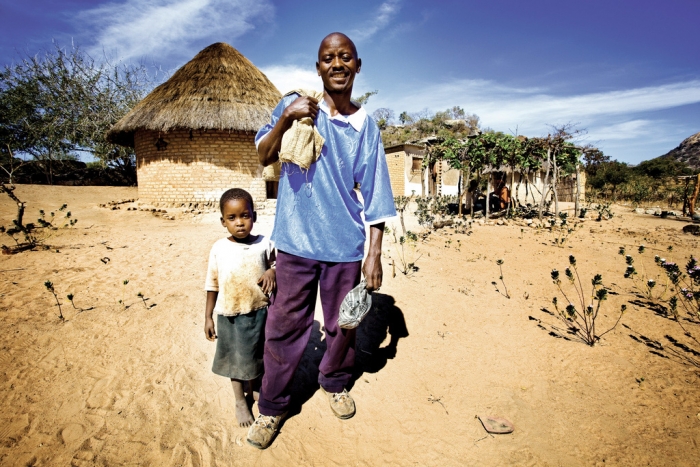 DFID
Putting a brave face on it - drought has hit production, again

According to the Zimbabwe Vulnerability Assessment Committee, the key planning tool of the government and international partners, 4.1 million rural people will be without “adequate means to meet their annual food requirements” at the beginning of next year. During the same quarter last year, it was three million.

The underlying problems behind Zimbabwe’s food insecurity are well-known. They include the dependence on rain-fed agriculture; a poorly integrated climate risk management policy; and the absence of broad and effective support to the small-scale farmers who grow most of the country’s food.

The government’s response this year is the promotion of state farms. It has set aside $500 million for the initiative, which aims to produce two million tonnes of maize on 400,000 hectares of mostly irrigated land. The lucky participants will receive seeds, fertiliser, and tools.

But the turn to what has been labelled “Command Agriculture” has been heavily criticised by a range of commentators. Even Vice President Phelekezela Mphoko – whose shops attracted the wrath of the looters – seemed less than triumphant when he handed over tractors from Brazil to the new farmers.

“We received tractors from China about 10 years ago and they disappeared,” he grumbled. “The Reserve Bank of Zimbabwe distributed another batch of tractors, and we’re not seeing them today. I don’t want the same to happen to these tractors that I’m commissioning today.”

In an opinion piece, Ben Freeth, a former commercial farmer, wrote: “In my view, the entire Command Agriculture concept is another blundering totalitarian control and patronage scheme that is doomed to fail to feed the nation. Stalin, Mao, Pol Pot, and others in the days before food aid oversaw comparable schemes and millions of people perished.”

Despite a history of neglect, the rural areas have traditionally been a vote bank for President Robert Mugabe and his ruling ZANU-PF. The cities, suffering from acute shortages of money (Zimbabwe is a dollarised economy), along with inflation, power shortages, and crumbling infrastructure, have been less forgiving and quiescent.

It is the anger of the urban poor, people who like Ruramai Chakanyuka feel let down and abandoned by the government, that is driving a civil disobedience campaign that is responding with strikes and demonstrations – a level of protest Zimbabwe has not seen in years.

(TOP PHOTO: Money shortages means queues to get money out of the banks)