Afghanistan has failed to live up to a 2014 pledge to care for people displaced by conflict within its borders, according to a report released today, even as the number of displaced has doubled to 1.2 million over the past three years.

In its 2014 National Policy on Internally Displaced Persons, Afghanistan’s government promised to provide IDPs with access to basic living standards including food, water, shelter, and healthcare. Yet, researchers with Amnesty International found that many IDPs are living “on the brink of survival”.

“Even an animal would not live in this hut, but we have to,” said Mastan, a 50-year-old woman quoted in the report. “I would prefer to be in prison rather than in this place. At least in prison I would not have to worry about food and shelter.”

The policy was supposed to ensure that IDPs could either: return to their homes; be integrated into the communities where they had settled; or be offered the opportunity to resettle elsewhere in the country. But the researchers found that little has been done to implement the agreement, while IDPs have been forcibly and violently evicted from some sites.

Meher Khuda Sabar of the Ministry of Refugees and Repatriation admitted that implementation of the policy is “too slow”, which he blamed on poor coordination between ministries. He explained that the MoRR’s role is to liaise with relevant ministries, as well as between the provincial and central governments, which are all responsible for different aspects of the policy.

“For example, access to education or health is not responsibility of MoRR; every organ and ministry has their own role,” he told IRIN. “Every province should bring their plan for MoRR, then MoRR will implement that.”

Another reason for the failure, said Amnesty, is that “the Ministry of Refugees and Repatriation, charged with coordinating the policy’s implementation, is badly under-resourced and has been beset by corruption allegations for years”.

A report last year by the Special Inspector General for Afghanistan Reconstruction, which is tasked by US Congress to track American aid to the country, found that officials at MoRR had misappropriated funds and horribly mismanaged a land allocation programme.

At the time of the SIGAR report, Minister of Refugees and Repatriation Sayed Hussain Alimi Balkhi told IRIN that his government had “started to fight against corruption” within the ministry.

“It remains to be seen what effects the new anti-corruption efforts will have,” Amnesty said. “However, the years of alleged endemic corruption raises serious questions about the ministry’s ability to effectively lead the implementation of the IDP Policy.” 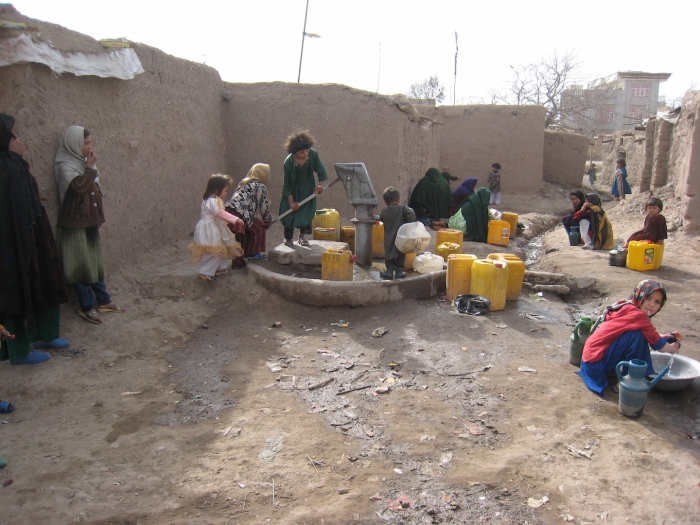 Amnesty International
The only water pump in the Minaret camp for displaced people, which is in the middle of the Afghan city of Herat

The national IDP policy was also undermined by an uptick in fighting over the past few years, which has displaced record numbers of people.

A recent report by the UN’s emergency aid coordination body, OCHA, found that an average of 1,000 Afghans have fled their homes each day this year due to conflict. With 118,000 people displaced in Afghanistan so far in 2016, the country is on track for another record year.

The number of IDPs rose 40 percent from 2014 to 2015, according to OCHA, and aid groups are having a hard time reaching many who are trapped in remote and insecure locations.

The conflict between the Afghan government and militant groups including the Taliban and the so-called Islamic State shows no signs of abating. In fact, indications are that it’s getting worse.

“As international troops have left the country, Afghan security forces are leading the fight against anti-government groups like the Taliban, who are arguably at their strongest since their ouster in 2001,” Amnesty said.

Data from the UN Assistance Mission in Afghanistan shows the growing impact on civilians. At least 11,002 civilians were killed or injured last year: a four percent increase over the previous year, and a shocking 21 percent jump from 2013.

In the face of a growing displacement crisis, Amnesty has called on the Afghanistan government to honour the promises it made in the 2014 national IDP policy. But the rights group also says Afghanistan cannot do it alone, and it urged the international community to provide support.

As the world has been gripped by other humanitarian crises, that support has not yet materialised. Even though the UN downgraded its humanitarian appeal for Afghanistan for 2016 to $393 million, less than a quarter of that has been funded so far.