Togo’s former capital city, Aneho, and dozens of surrounding villages, along with the main road that links the west African country to Benin, are likely to disappear from the map by 2038, local authorities and international experts say, if nothing is done to reverse the erosion that is currently eating away between six and 10 meters of coastal land each year.

Along with the lost beaches, tens of thousands people will lose homes and livelihoods, while the Togolese economy, which depends largely on fishing in these areas, is expected to suffer.

“All appropriate measures must be taken to curb this phenomenon,” said Adote Blivi, who works with the United Nations Convention on the Law of Sea and UNESCO’s Intergovernmental Oceanographic Commission.

Rodolphe Teko says there is little he himself can to do stop the erosion that has been slowly destroying his native village of Agbavi, a few kilometres outside Togo’s capital, Lomé, for the past few years.

The fifty-year-old recently returned home, after living in Nigeria for several years, only to find that the house he had grown up in had been washed away. The second house, which his father recently built, is also about to be swept out to sea. Half of the structure has already been destroyed. There remains just a few half-standing rooms and a make-shift shelter for the family’s fetishes.

“The fetish is supposed to protect us,” Teko said. “But it cannot withstand the advance of the sea. Even the shelter we house it in has been partially damaged.”

Many Togolese families put fetishes outside their homes to protect them, but they are no match for r 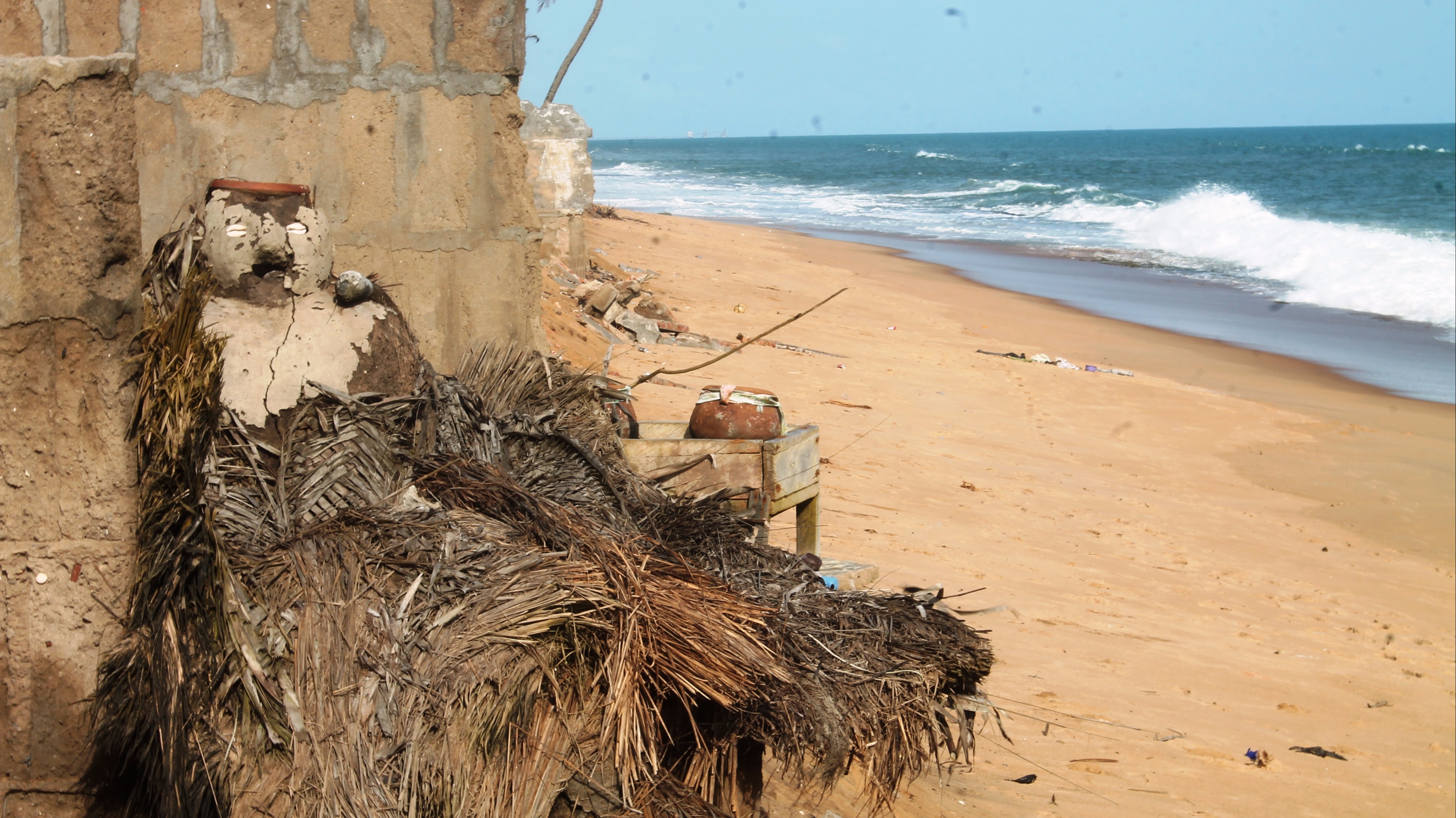 Teko says that back in the 1990s the sea was still many kilometres away from homes and businesses.

“We used to get there by car or bike,” he told IRIN. “Today, the sea rubs up against us, it enters our homes.”

In the last year, especially, most people in Agbavi have been either forced to squat with relatives who live further inland, or else build makeshift shelters out of braided leaves from coconut trees, along the receding coast, and pray the water doesn’t rise further.

No fish, no money

Togolese fishermen say that for as long as they can remember, they used to be able to throw out their nets from the shore, or just offshore in wooden boats, and bring in fish. Today, it is no longer possible. Unable to afford larger boats better suited to sailing further offshore, most have lost their sole means of income.

“According to experts who came to visit us here, all the fish have fled,” said 71-year-old Koukou Dossou, a longtime fisherman, who now collects seashells, and digs up sand and gravel, to sell in order to support his wife and daughter.

Unable to fish, and with their businesses destroyed, many people in Togo are now collecting gravel t 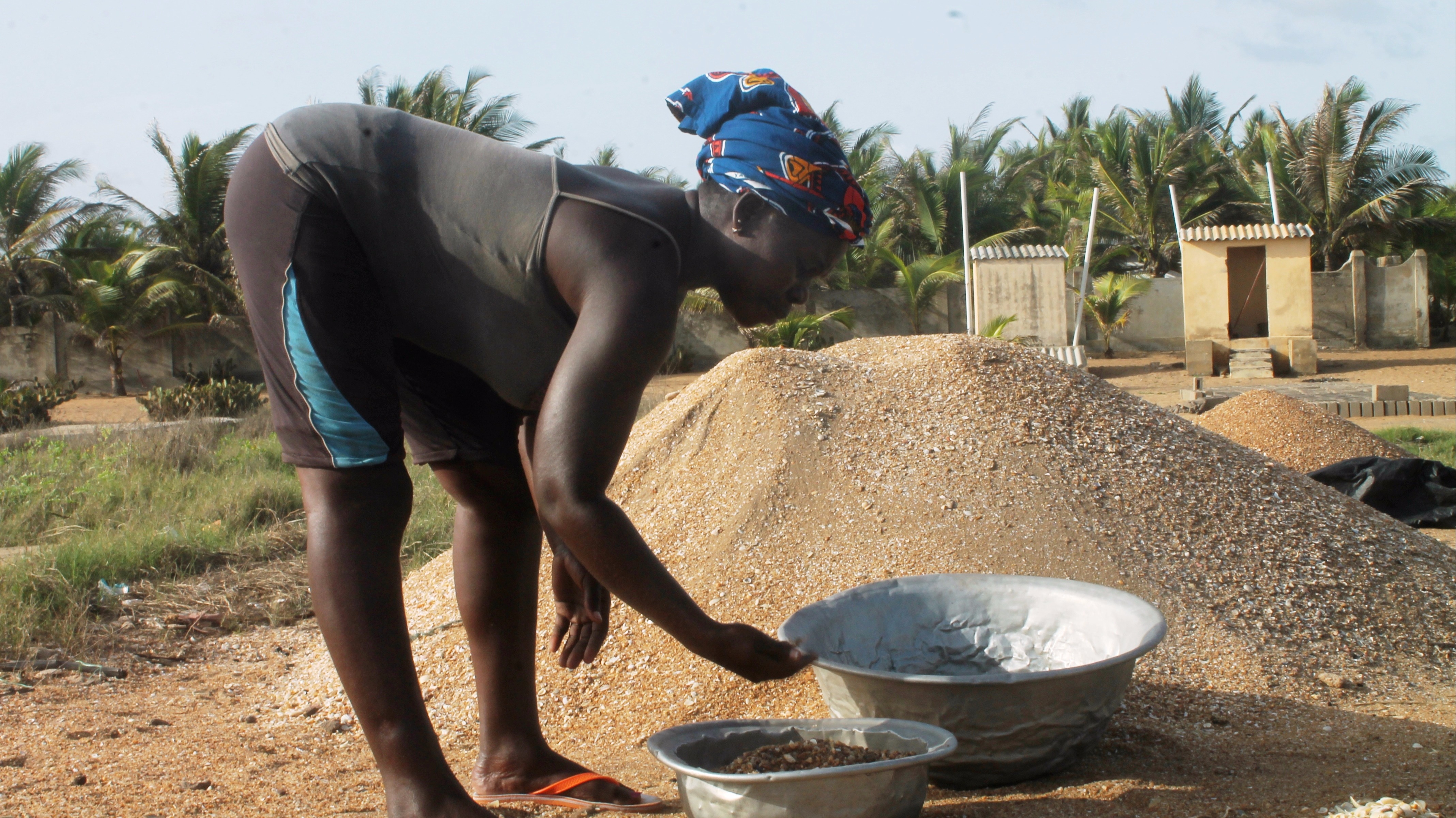 Ironically, such works contributes to the erosion that destroyed his home and left him unable to fish.

“Officers at the town hall have made us realize that we lead the activity, accelerating coastal erosion,” he told IRIN. “But if we stop, how will we survive?”

Dossou said that the government, in 2013, promised to give fisherman affected by rising sea waters and erosion $1,500 towards a motorized boat so that they could go further out to sea to make a catch. The money never came.

“If we received the sum we would not be here doing this work [collecting gravel],” he said. “We want to resume fishing.”

He and hundreds of other fishermen are now joining forces to demand the government do more to stop the erosion caused by rising seas.

Aside from the construction of a two kilometre sand barricade along Aneho Beach, which lies some 52 kilometres outside of Lomé, little has been done. An additional 54 kilometers of inhabited land are in imminent danger, according to Togo’s Ministry of the Environment and Natural Resources.

Earlier this year, the World Bank committed $125 million to Togo, along with additional money for Ghana and Benin, as part of its “coastal erosion and climate resilience building in West Africa” initiative. The money was pledged to raise awareness about climate change impacts in the region, develop a coastal zone management plan and build up local resilience to climate change.

But residents say they have yet to see any implementation of the program.

Togolese authorities say they are “closely monitoring” the evolution of the sea and water levels, and working with local partners to reverse the trend. They hope to follow in Brazil’s footsteps and dredge sand from deeper seas to replenish that which is being washed away.

But for Teko, Dossou and countless others, it is already too late.

“The waters are rising; our fish are gone; our homes destroyed,” Dossou said. “It is no longer possible these days [to survive] here.”